Huawei launched the P30 Pro and the Mate 30 Pro last year, which brought it into the limelight thanks to the cutting-edge camera tech that the company has been working on over the years. Not to mention, it was the Mate 30 series that became the first smartphones from the company to get affected by the US-China trade war, and as a result, saw a dip in its sales numbers.

While that affected the company to a certain degree, the Chinese smartphone giant is here again to unveil its flagship smartphone lineup for the year, the all-new P40 series — P40 Pro, P40 Pro, and P40 Pro Plus. In addition, the company has also announced the Watch GT 2e, which is more like a refresh to the Watch GT 2 with minor updates. Although, with the ongoing situations due to the coronavirus outbreak, the company had to take an online-only approach to announce the new products, which were otherwise slated to be unveiled at an event in Paris. Let’s dive in and check out the new devices in detail. 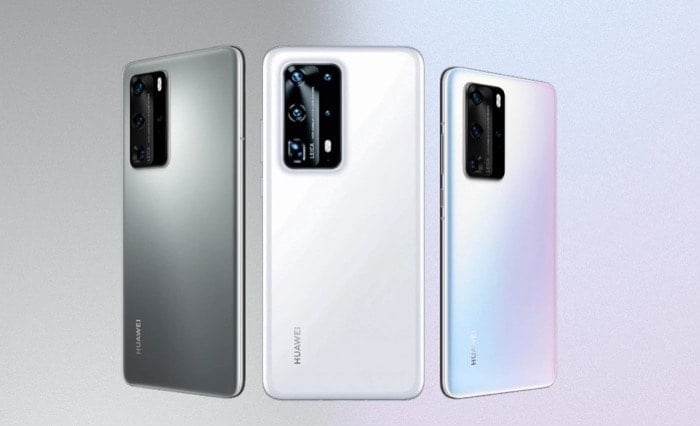 In terms of design, the P40 series, including the P40, P40 Pro, and the P40 Pro Plus, all feature a similar looking design with a huge camera bump on the rear to house the triple, rear, and quad cameras. While the P40 and the P40 Pro come with a glass back (with Gorilla Glass protection on top) that offers two finishes: Glossy (Ice White, Black, and Deep-Sea Blue) and Matte (Silver Frost and Blush Gold), the top-of-the-line model, the P40 Pro Plus, on the other hand, features a ceramic back design, which the company says ‘shines like a diamond’ and is ‘as strong as a sapphire’.

Towards the front, the P40 Pro and P40 Pro Plus come with curved glass edges on all four sides, which gives it a unique and distinct look. There is a hole-punch cutout on the top-left, which houses the front-facing camera and the IR-based face unlock on the P40 Pro and the P40 Pro Plus. Similarly, the two models also share the same OLED panel, which comes in at 6.58-inches and offers a screen resolution of 2640 x 1200 pixels with a 90Hz refresh rate. Whereas, the vanilla P40 features a regular OLED panel with a 2340 x 1080 pixel screen resolution.

Talking about performance, the P40 series is equipped with the Kirin 990 processor at its core, which offers 5G capabilities and comes with a 16-core Mali-G76 GPU for faster graphics performance. To power the internals, the P40 includes a 3800mAh battery with 40W wired charging support. Whereas, the other two models get a slightly bigger battery, which comes in at 4200mAh capacity and offers 40W wireless charging in addition to the 40W wired charging found on the vanilla model.
The regular P40 boasts 8GB of RAM and 128GB of internal storage, while the other two models, get 8GB and 12GB of RAM and 128GB / 256GB / 512GB of onboard storage options. Moreover, all three variants get expandable memory with Huawei’s proprietary Nano Memory slot.

On the software front, all three P40 models run on the company’s very own EMUI 10.1 skin based on Android 10, out of the box. Furthermore, with the ongoing dispute with the US, the phones do not come with GMS (Google Mobile Services), and instead, have their own version of the same, called the HMS (Huawei Mobile Services), which is still under development. Besides, there is support for Celia — Huawei’s in-house voice assistant that can be triggered by calling out ‘Hey Celia’ or by holding down the power button.

In the camera department, the vanilla P40 sports a triple-lens camera setup on the rear. The setup includes a 50MP Ultra Vision wide (primary) RYYB sensor with f/1.9 aperture, accompanied by a 16MP ultra-wide sensor with f/2.2 aperture, and an 8MP telephoto sensor with f/2.4 aperture with 3x optical zoom and OIS.

On the other hand, its high-end sibling, the P40 Pro comes with quad rear cameras that include the same 50MP Ultra Vision wide (primary) RYYB sensor with f/1.9 aperture and OIS, along with a 40MP ultra-wide cine lens with f/1.8 aperture, a 5MP telephoto lens with f/3.4 aperture, 5x optical zoom, and OIS, and a ToF sensor for depth sensing.

On the front, all the three models come with the same 32MP selfie camera with f/2.2 aperture. However, the high-end models, the P40 Pro and the P40 Pro Plus also get an IR depth sensor that helps it offer better depth sensing abilities.

Talking about other specifications, the P40, P40 Pro, and the P40 Pro Plus, all come with a USB Type-C port, an optical in-display fingerprint scanner for authentication — which is now 30% bigger and 30% faster than the previous generation, eSIM support, NFC, WiFi 802.11ax, Bluetooth 5.1, and support for GPS, AGPS, Glonass, Galileo, and QZSS. Besides, the regular variant provides IP53 water and dust resistance, while the other two models offer slightly better protection, and come with IP68. Moreover, you also get an IR-based face-unlock system on the non-vanilla models, which is an upgrade over the camera-based system from the previous generation.

Huawei P40, P40 Plus, and P40 Plus Pro: Pricing and Availability

Was this article helpful?
YesNo
TechPP is supported by our audience. We may earn affiliate commissions from buying links on this site.
Read Next
Huawei FreeBuds 4i Review: A Well-Rounded ANC Performer for Its Price
#Huawei #Huawei P40 #Huawei P40 Pro #Huawei P40 Pro Plus