OnePlus 8 vs OnePlus 7T: How do they compare?

The new OnePlus flagships are here, which means the older ones get a price cut and become more affordable. With the OnePlus 8 being announced just today, the OnePlus 7T which was launched not too long ago will sell for a more affordable price and has quite a few similarities with the new OnePlus 8. If you are confused about whether to spend a little more and go for the latest offering or save some bucks and get the OnePlus 7T, we’ll help you decide which one would be the best for you. 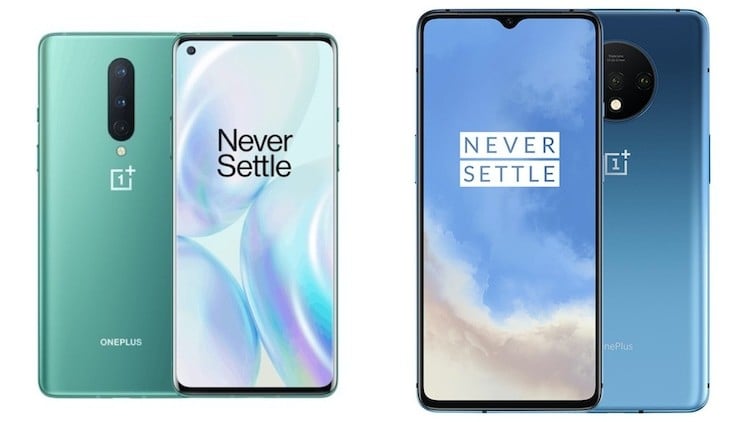 Both the OnePlus 7T and OnePlus 8 share a similar design language. Glass on both sides with the back having a frosted finish. The OnePlus 7T has a unique camera arrangement on the back with a circular module while the OnePlus 8 has a more conventional vertical alignment. You also get some pretty interesting colors with the new OnePlus 8 like Glacial Green and Interstellar Glow.

This can be regarded as one of the major changes from the OnePlus 7T depending on how you perceived the notch on that phone. The OnePlus 8 gets a punch-hole AMOLED display with a Full HD+ resolution and a 90Hz refresh rate. Not just that, but the display on the OnePlus 8 is now curved on the sides just like the OnePlus 7 Pro and the 8 Pro. The display on both phones measures 6.55-inch diagonally.

The OnePlus 7T on the other hand also comes with a Full HD+ AMOLED display with a 90Hz refresh rate. However, the panel on the OnePlus 7T is not curved on the edges and instead of the punch-hole cutout, you get a dew-drop notch. The punch-hole implementation looks much cleaner undoubtedly, but some users prefer the flat display panel from the OnePlus 7T over the curved display on the OnePlus 8. That again is based on personal preference.

The OnePlus 8, being the latest flagship from the brand comes with updated internals which means it gets the all-new Snapdragon 865 SoC with 5G capabilities. The Snapdragon 865 is the best available smartphone chip on the Android side of things so you can expect blazing fast performance when coupled with OxygenOS.

The OnePlus 7T, however, is no slouch despite the fact that it runs on last year’s Snapdragon 855+ mobile platform. In day-to-day usage, you will not notice any major difference be it while multitasking or while playing heavy games like PUBG. However, if you’re going to be using 5G and you want a phone that’s more future-proof in this regard, the OnePlus 8 is obviously the better option. Since both phones run on OxygenOS, there isn’t anything to differentiate between the two in terms of software either. The OnePlus 8, however, would probably get longer software support because it’s newer.

Which one to buy?

Clearly, the OnePlus 8 has better performance, a cleaner looking front with a punch-hole camera, and a larger battery. The OnePlus 7T on the other hand also performs great to this date and has more versatile cameras and a flatter display which some users seem to prefer. But, more importantly, it also costs much lesser than the new OnePlus 8 which makes it a great option even in 2020. Unless you want the latest tech with 5G and a larger battery, the OnePlus 7T offers better value.

Snapdragon 778G Plus vs Snapdragon 870: How they Compare?
Google Pixel 6a Vs Nothing Phone (1): How Do They Compare?
OnePlus 8 vs OnePlus 8 Pro: How they differ?
iOS 14 iPhone Widgets: What are they and how to use?
Handing your phone to a friend? Make sure they can use only…
OnePlus set to make its CES debut with the OnePlus Concept…