When the COVID-19 crisis had struck, we had written a story on how Amazon’s Kindle Store was the only bookstore to be open around the clock, even when many parts of the world were under lockdown. And as the world slowly tries to return normal, eBooks (or electronic books), which many had considered to have been an idea that did not catch on, suddenly seem set for a revival. In fact, one of India’s leading publishers, Penguin Random House, has announced an exclusive eBookstore on Amazon India. One can go and download eBooks from this store by going here. We have been told that the store will have “over 400 bestselling titles all at one place available on Amazon India website at attractive discounted prices.” The books will be available across a wide variety of genres. Of course, as the store is on Amazon, the ebooks will be in the format for its Kindle ebook reader and ebook app. 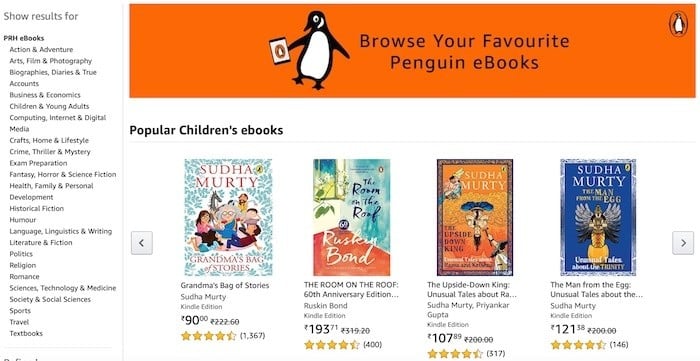 The bit about the attractive discounts does seem to be right. We scanned the store very casually and came across classics like Khushwant Singh’s Train to Pakistan for Rs 49, Arundhati Roy’s award-winning The God of Small Things for Rs 99 and Ramachandra Guha’s Gandhi Before India for Rs 240, all of which are a fraction of their paperback, and even their general Kindle prices. A statement from Niti Kumar, SVP, marketing, digital and communications, Penguin Random House India, hinted that the decision to open an exclusive ebook store was influenced by the COVID-19 crisis. “Initiatives built on eBooks can bring the spotlight on a mode of reading, which in addition to being safe and easily accessible, is also more affordable and comes with additional features that make reading more pleasurable and informational,” he said. Of course, he also stressed that “India is an up and coming market in eBook consumption and we are confident that with over 500 million internet users, there is definite potential that more people can take to reading eBooks.”

The move might not seem very significant in itself but we think it could be the first of many in the Indian and indeed the global book publishing industry. With the COVID-19 crisis resulting in most people being confined indoors and book stores being closed, ebooks have emerged as the best option for publishers to reach their audiences. What’s more, even when the lockdown is lifted and bookstores do open, the stress on social distancing could lead to lower conventional book sales. The only options most publishers and retailers would be left with is delivery by courier (which is expensive and many are not equipped to do) or moving titles to a digital platform. For the duration of the crisis, at least.

It needs to be remembered that ebooks had arrived with a lot of hype when Amazon had launched the Kindle in 2007, but this hype had subsequently died out as book publishers had continued to highlight “paper editions” and also not offered significant discounts to those going for digital copies. COVID-19 seems to be changing that. Could this be the beginning of the ebook era? It is too early to say, but it could happen. Simply because bookworms do not know from where to get new paper leaves.

Was this article helpful?
YesNo
TechPP is supported by our audience. We may earn affiliate commissions from buying links on this site.
Read Next
12 Best Audible Alternatives: Top Free or Cheap Audiobook Apps [2023]
#Amazon #Amazon Kindle #CoronaVirus #ebooks