Xiaomi made its foray in the smart TV territory back in 2018 with the announcement of the 55-inch Mi TV 4, which ran a forked version of AOSP with PatchWall running on top. At the time of the announcement, and subsequently, along this course, the company promised to bring the Android TV upgrade to its first-ever TV in India. However, it seems that there is no upgrade coming after all, and instead, the customers would be offered a deal to make up for not living up with their predicament. 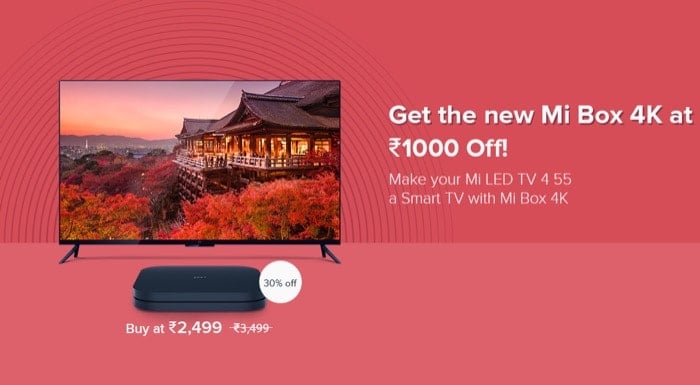 Xiaomi addressed the situation with a statement, which reads, “At Xiaomi, our endeavor is to provide the best Smart TV experience to all our Mi Fans and we are constantly working on improving it. While we have pushed the latest Android TV update to over 3 Million devices, we regret to inform that android updates cannot be made available to Mi TV 4 55″ because of the custom chip used in the device on account of its unique design which does not support the requirement for Android TV codecs. In lieu of the same, we are offering a discount of Rs 1000 on our newly launched Mi Box 4K to all our existing Mi TV 4 55″ customers.”

The deal, which Xiaomi is offering to its customers who own a Mi TV 4 (55), includes a discount of Rs 1,000 on its newly launched Mi Box 4K. To give you some background, the Mi Box 4K was announced at the India launch of the Mi 10 alongside the Mi True Wireless Earphones 2, a few days back. In a nutshell, the basic idea behind the device is to allow users to turn a regular TV into a smart TV and get access to all smartTV features and entertainment services in a simplified manner. And to add to the experience, the Box runs on Android TV, which means it brings along support for Google Assistant to simplify your interactions, along with built-in Chromecast support.

As for its pricing, the Mi Box 4K is priced at Rs 3,499, and it is already on sale across mi.com, Flipkart, Mi Home, and Mi Studio. However, with Xiaomi failing to deliver the promised Android TV update to the Mi TV 4 (55) users, it will be offering the Box at a discount of Rs 1,000, which brings down the effective price to Rs 2,499.

To avail the offer, customers who own a Mi TV 4 (55), can head to the Xiaomi India website and fill-up the form with their details to register for the discount. Once done, they would receive a coupon code on their email address, which can then be applied at checkout for the Mi Box 4K to redeem the offer.

Editor’s note: While it’s commendable that Xiaomi still cares about the customers who bought their TV two years back, Rs 1,000 discount on a product costing Rs 3,499 might not be pleasing enough for the users. Mind you, these are the very first set of customers who trusted the brand with no history of selling TVs in the country and can be considered as “true fans”. A 30% off on an accessory after waiting for two years might be seen as a raw deal by many.

Was this article helpful?
YesNo
TechPP is supported by our audience. We may earn affiliate commissions from buying links on this site.
Read Next
With Redmi A1, is Xiaomi Resurrecting the Android One Dream, but Without Google?
#Mi Box 4K #Mi TV 4 #xiaomi