Called the Redmi Earbuds S, the earbuds are essentially the same as the Redmi AirDots S, which were launched in China last month, and feature a 7.2mm driver, connect over Bluetooth 5.0, offer IPX4 protection, and promise up to 12 hours of battery life.

In terms of design, the Earbuds S follows the same design as the Redmi AirDots S. They come in only one color option: Black, and are IPX4-rated for water resistance. Similar to most other TWS earphones, the Earbuds S also offers touch controls for music controls and quick access to the voice assistant.

As for the internals, the Redmi Earbuds S feature a 7.2mm driver unit and are powered by the Realtek RTL8763BFR chip. The company suggests the earbuds feature a low latency gaming mode, which, just as it sounds, reduces the latency while gaming to offer a seamless experience with reduced delay in sound. Users can simply triple-tap on the earbuds to enable the low latency gaming mode. Furthermore, they can also double-tap on the earbuds to launch the voice assistant and perform a single tap to skip tracks. 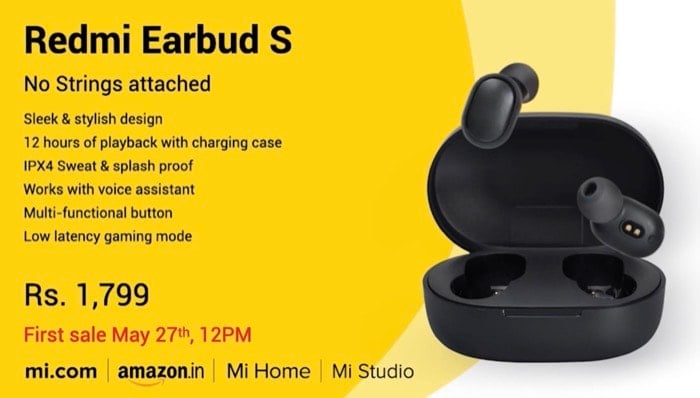 The Redmi Earbuds S is priced at Rs 1,799. It will go on sale starting May 27 at 12 PM on mi.com and Amazon.in, followed by Mi Home, Mi Studio, and other offline stores soon. The AirDots S was launched in China for 99 Yuan.

Was this article helpful?
YesNo
TechPP is supported by our audience. We may earn affiliate commissions from buying links on this site.
Read Next
Redmi Note 12 Pro+ Review: Striking a Premium Note?
#Redmi #Redmi Earbuds S #xiaomi