If you do not own a smart television, but watch a lot of content across different platforms, one way to get the most out of the experience is to connect your Android device to a TV and view the content on a larger display. In the same vein, since most of us capture images on a smartphone in general, the same approach also helps to relive old memories and experience them to the fullest on a bigger screen. Not to mention the ability to connect your phone to a TV, along with a controller, and leverage the bigger screen estate for playing games, which is another use case. So, to help you with the process, here’s a guide on how to connect your Android phone to a TV. 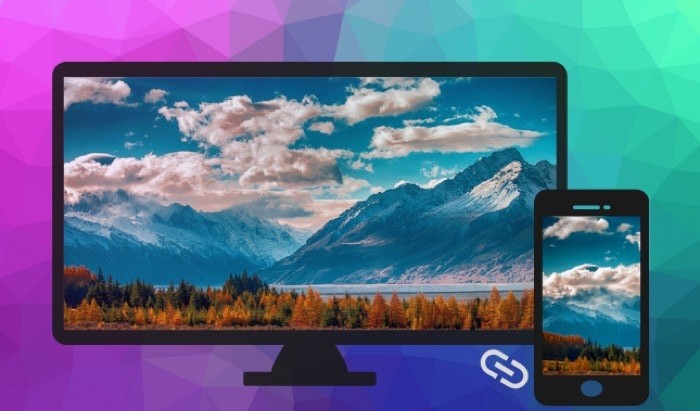 Before proceeding with how to connect your Android to television, let’s first differentiate two of the most confusing terms when it comes to smartphone-TV connections: Mirror and Cast.

When you think of connecting a phone with a television, there are two ways to go about this. One way is to mirror the entire screen of your Android phone to the TV, which, if you go by the literal meaning of the word “mirror”, implies that your Android’s entire screen is shared as-is on the television. As a result, whatever actions you perform on the device reflect in real-time on the television as well. On the other hand, the other way — cast — is about limiting the device’s capability to share what’s present on the screen on to the television. And instead, offering you the ability to choose specific apps/content that you want to share on the TV, rather than mirroring the entire display. Thus, giving you more control over what you share on the TV.

How to Connect Android to TV

I. Wired way to connect your Android device to TV

One of the simplest ways to connect an Android device to a TV and get started with screen mirroring is using cables and adapters. In general, the preferred interface for audio/video sharing without incurring a significant loss in its quality is over HDMI (High Definition Multimedia Interface). However, since Android devices come with either a micro-USB or a Type-C port, you are required to use an adapter to transform the data into a format supported over HDMI and readable on the television.

Unless your television is pretty old and dates back past the last decade, it likely comes with an HDMI port — an interface to transmit high-quality, uncompressed audio/video. In this case, connecting it to your Android device is fairly straightforward. For this, all you need is a USB to HDMI adapter — depending on the USB port in your device, it can either be micro-USB or Type-C. Most importantly, make sure your Android device supports HDMI, and find a compatible adapter for the same.

You can get HDMI in two types: MHL and SlimPort. To give a quick rundown, MHL (Mobile High-Definition High Link) and SlimPort are two technologies that aid a device with screen sharing by extracting data over USB and showcasing it in a compatible format over HDMI. While both aim to offer the same solution, they do differ in certain aspects, like the supported formats, power requirements, and versatility. 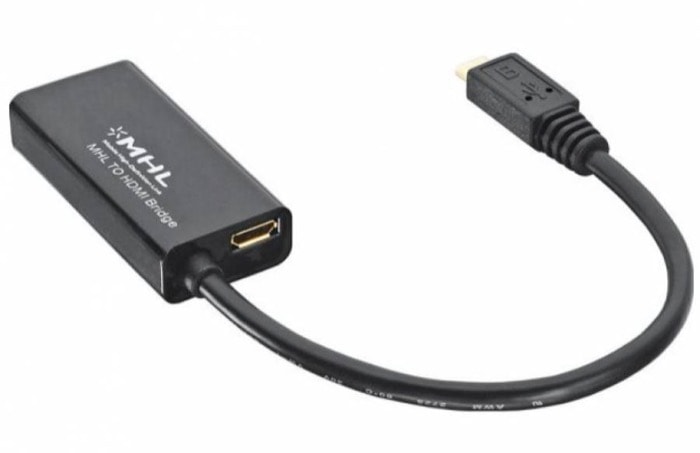 Furthermore, MHL adapters can be further divided into two types: active and passive. Active MHL adapters are the ones that require an additional power source for functioning, whereas its counterpart, the passive MHL adapters, rely on the power offered by the television and only work with those television sets that are MHL-ready. What this essentially means is that if you have an active MHL adapter, you will be required to connect an external power source to your adapter for it to work. However, if your television is MHL-ready by default, you can use a passive adapter, and the TV will serve the power to the adapter. 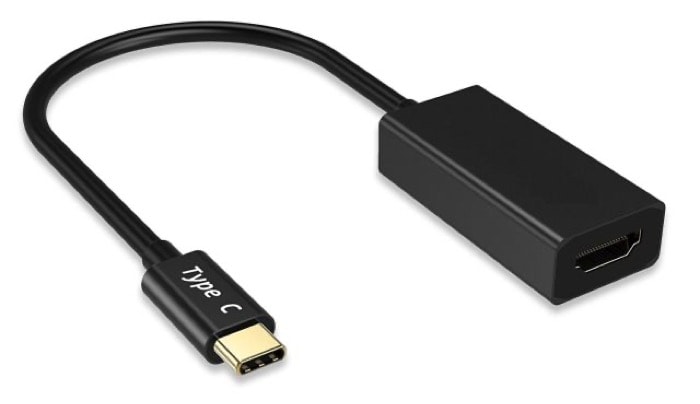 II. The wireless way to connect Android to TV

The wired method, which, although it seems pretty straightforward, does have a few shortcomings. The biggest of them is the amount of time that goes into researching the right adapter for your Android device. Especially now — with an ever-increasing number of Android devices in the market — which makes it a tedious process to find a compatible adapter for your Android to establish a wired connection with the TV. And therefore, the need for wireless solutions.

To connect Android to TV wirelessly, you essentially get two options: Chromecast and Miracast. While Chromecast is a device and the current-gen solution for media streaming needs, Miracast is more of a protocol and has been around on televisions for quite some time now. Moreover, unlike Chromecast, it comes built-in on most televisions. You can think of Miracast as an alternative to HDMI since the two perform the same functionality — mirror the screen of the connected device (Android, in this case) on the TV.

Related: How to Use an Android Phone or Tablet as Second Monitor on Windows

If you own a Google Chromecast and use it to stream media on your television, you will be delighted to know that the same can also be used to cast your Android’s screen on to a TV without having to spend a penny. Add to that the advantages of using a Chromecast over a traditional dongle or cable, which is that, with Chromecast, you can choose the apps you want to cast on the TV while also having the ability to use your device simultaneously. Whereas, with a cable/dongle, the entire device’s screen is mirrored on the television, and you cannot multitask or use other apps on your phone simultaneously. 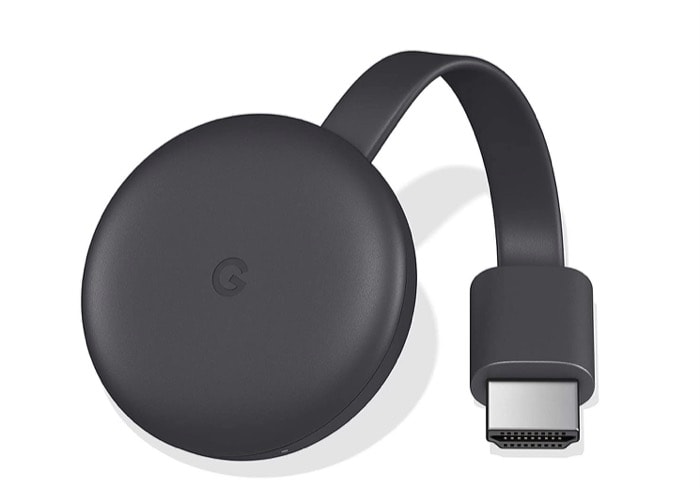 To cast your Android’s screen using Chromecast, first, connect the Chromecast to your television using the provided HDMI cable along with a power supply (over USB or wall socket). Next, download the Google Home app on your Android and follow the on-screen instructions to establish a connection between the device and your TV. Finally, open the app you want to cast to the television on your Android and hit the Cast button.

Much like Google Chromecast, another plug-and-play device called the Fire TV Stick also provides the option to cast Android’s screen on a television. So, if you happen to use a Fire TV Stick to get access to all the different media streaming services, such as YouTube, Netflix, Prime Video, Hulu, etc., on your TV, you can also use it to share content from your Android device on the bigger screen. 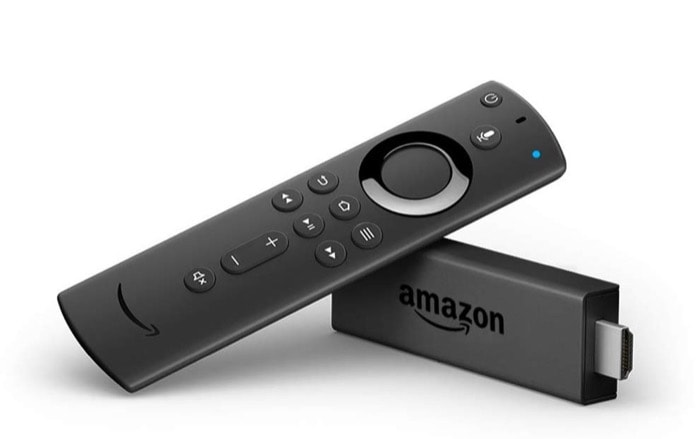 For this, connect the Fire TV Stick to the HDMI port on the TV and attach a power supply to the Stick. Now, enable the Screen Mirroring option in the Stick’s settings, and on your Android device, hit the Cast button and search for the device. Once found, connect the two devices, and you are ready to cast content from your Android on the television.

If your purpose for connecting an Android to a TV is to play songs or view photos and videos, and you do not want to spend money on buying either a Chromecast or Fire TV Stick, the AllCast app is your best bet. The app allows you to share photos, videos, and audio files from your Android to your TV without much hassle. Moreover, besides casting content on a regular TV, it also supports streaming on a bunch of devices, such as Xbox, Roku, Chromecast, Fire TV Stick, and more.

LocalCasts is another Android app to help you cast your device’s content, such as photos, videos, or audio files, to your television. Much like AllCast, it can also cast over other devices like Roku, Xbox, Chromecast, Fire TV Stick, and other DLNA devices. The app supports various file formats and offers access to more features with an in-app purchase, like search and video preview.

Using either of the two methods mentioned above, you can easily connect your Android phone to a TV and cast/mirror its content on a bigger display for a more enjoyable experience. Be it viewing your photos/videos, watching content off of YouTube (or any other platform), gaming, or even using your Android device as a media streaming player — the use cases are endless.

Was this article helpful?
YesNo
TechPP is supported by our audience. We may earn affiliate commissions from buying links on this site.
Read Next
How to Install and Use Intel Unison App on Windows, Android and iOS
#Amazon Fire TV #android #Chromecast #DLNA #Google Chromecast #how to guide