If you clicked on this article, it is quite likely that you own subscriptions for at least a couple of over-the-top (OTT) services out there. Be it for music or video streaming platform. For, at the rapid pace at which new users are joining the internet each passing day; data tariffs (cellular + broadband) are becoming more affordable; new content is being added up to the mammoth of a collection across different OTT platforms, the content-streaming scene in India is currently on an all-time high. And, it holds the opportunity for an even brighter future for the years to come — especially now, when telcos have started bundling subscriptions for various OTT platforms with their plans to provide value to the existing customers and lure-in new ones. 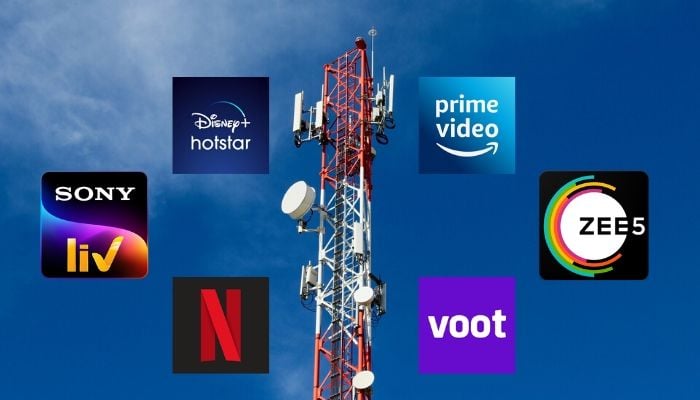 Unless you have been totally out of touch with the real world and oblivious to Jio-revolution, you would be aware that Reliance Jio, a subsidiary of Jio Platforms, has been a key enabler in India’s digital revolution. From its initial days of offering services for free, to introducing tariffs that included all three services — calling, messaging, and the internet — in one, for the first time, at an ever-affordable price point, Jio certainly opened a portal for the digital revolution in the country. As a result, over the past few years, the telecom-giant managed to trigger demand for content across various OTT platforms — something that other operators failed to do. Since now, for the first time, users no longer had to worry about keeping their data-usage under check, and therefore, could enjoy the benefits of streaming content on the go anytime anywhere.

While Jio brought in a barrage of content across different streaming platforms and attracted customers from other carriers, it did raise concerns for some of the popular carriers back in the day, initially. Although, for the past couple of years, these carriers (Airtel, Vodafone, and Idea) have hopped on to the bandwagon and followed the footsteps of Jio in making data more affordable and available to the user. All of this, collectively, has resulted in two outcomes – a) increase in the number of available OTT platforms in the country, b) ever-increasing audience, who is always on the look for more content on these platforms.

Catching up with the trend and looking at the soaring rate of adoption of over-the-top (OTT) services among consumers, broadband service providers also started improving their infrastructure and introduced new plans with more data, faster speeds, and better connectivity. Not to mention, Jio also stepped into the broadband space, very recently, with Jio Fiber, promising gigabit speeds at comparatively affordable tariffs.

Alongside the democratization of data, another major development that the entire internet-space — including mobile carriers and broadband providers — has been a part of, was the inclusion of subscription for various OTT platforms bundled with recharge/data plans. As with more subscribers coming on board, the OTT platforms started partnering with telcos to serve their content to a larger audience, and in turn, increase their subscriptions. Not to mention, the deal subsequently also paved the path to benefit for telcos, who could retain their existing user base and gain new customers by luring them into offering subscriptions for free/at a lower cost.

What do market research reports suggest?

To corroborate the above statements, the following are some of the key takeaways from a market research study conducted by Ovum on behalf of Amdocs. As per the report published on Business Insider, “Indian consumers have by far the highest levels of multiple subscriptions among the five surveyed countries in the Asia Pacific region (India, Philippines, Singapore, Thailand, Australia)”. Further, “56% have access to or are subscribed to more than one paid OTT online media service”, whereas, “42% have multiple subscriptions because no single OTT media service provider meets their entertainment needs”.

Moreover, from what it appears, customers seem to be more interested in plans that offer bundled OTT subscriptions and are willing to either spend more on their service provider or make a move to other carriers with better offerings. Similarly, there also seems to be a lack of enough partnerships between the OTTs and telcos, which is causing a lot of consumers to opt for subscriptions for more than one OTT platform. Since, with the current offerings, the entire streaming spectrum is yet not covered by the telcos, which leaves a void for the concept of an ideal OTT-telco package hanging in the middle. 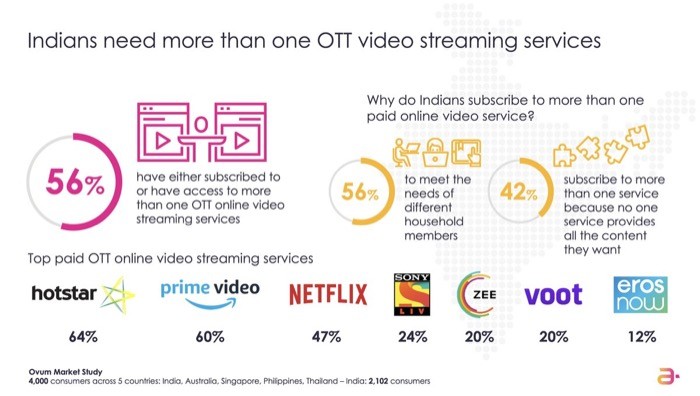 Based on what the report suggests, there seems to be a need for both telcos (mobile carriers and broadband service providers) and over-the-top (OTT) platforms, to get into more (and better) partnerships to be able to benefit the customers (and themselves) in the long run. However, looking at how the process for the same has been over the years, it still necessitates a lot of resources and time before an agreement is penned down, even as of today. And that raises some concerns and demands for the involvement of both parties to make the process straightforward and quick.

What do telcos have to offer?

Talking about what most telcos offer as part of their OTT subscription packages — when it comes to mobile carriers, Airtel has a bunch of offerings under its postpaid plans (starting at Rs 499) that offers Airtel Thanks benefits, which includes subscriptions to platforms like Prime Video and ZEE5, along with access to premium Airtel Xstream subscription. Similarly, on the prepaid side of things, it has the Rs 349 prepaid plan, which provides 28 days validity at 2GB data per day, along with ZEE5 subscription and one month of Prime Video subscription. And the Rs 401 plan that provides one year of Disney+ Hotstar VIP subscription with 3GB of data for 28 days.

The same extends to other mobile carriers as well, along with various broadband service providers, who are also starting to add OTT subscription bundles to attract more customers. To give you a general idea of what the other carriers bring to the table, Vodafone-Idea also offers its customers complimentary subscriptions to platforms such as Prime Video, Netflix, ZEE5, and the likes. Users can enjoy Prime Video for free with Vodafone Red postpaid plans, starting at Rs 399, and get access to one-year of Netflix subscription switching to the RedX limited edition postpaid plans for Rs 1099.

Talking about another major player, Reliance Jio, customers on any tariff of their prepaid plans get access to a complimentary subscription to Disney+ Hotstar. Alternatively, they can recharge with the Rs 2,599 annual plan to avail the VIP subscription, or recharge for a Rs 401 plan to get the same for a validity of 28 days with 90GB of data. 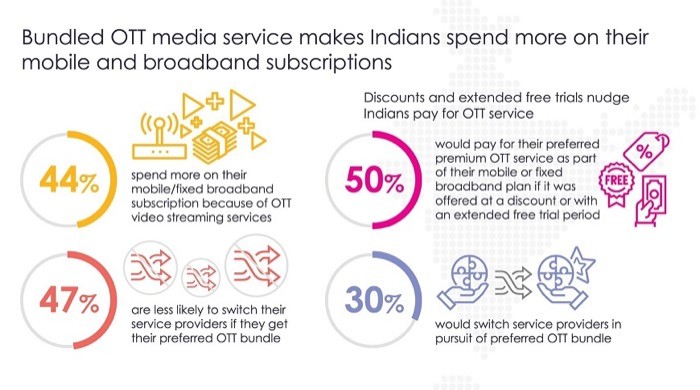 Interpolating the statistics from the Ovum-Amdocs report to get an idea of what the end consumer expects from telcos, it appears that “47% subscribers less likely to switch service providers if they get their preferred OTT streaming services”, while “30% of respondents would not mind switching to another operator if their current operator doesn’t offer their preferred streaming subscriptions”. To add to that, the report also suggests that “50% of users are willing to pay for premium media services via their carrier bill if offered at a discount or with an extended free trial”.

Who benefits at the end of the day?

At the end of the day, the current streaming scene, with regards to telcos and OTTs coming together, is a win-win situation for everyone — the telco, the OTT platform, and the end consumer. As on the one hand, the consumer would get (and is already getting) a variety of different offerings from various telcos to choose from due to the growing competition — not to mention, subscription to services at a considerably lower price, as opposed to what they cost separately. While on the other, with the streamlined and efficient process of getting on board, the telcos and the OTT platforms would mutually benefit from each other’s diversified consumer-base, and in turn, help in proliferating the market better.

All of this, of course, holds true when granted both parties come with an efficient process of partnering and signing deals, as, mentioned earlier, a large number of consumers are still not convinced with the package that the telcos have to offer currently. So for the above situation to hold true and benefit everyone, we need more OTT platforms and telcos (mobile carriers and broadband providers) to join hands in making content reach the masses and fill up the void for an idea OTT-telco package.

Was this article helpful?
YesNo
TechPP is supported by our audience. We may earn affiliate commissions from buying links on this site.
Read Next
NothingOS Made Me Realise How Much Overrated Pixel UI Is
#Indian Telecom #netflix #Opinion #Prime Video #Telecom #Zee5