Ever since cameras became a major part of a smartphone’s (and our) existence, brands have been trying every trick in the book to make it seem as if having a good smartphone camera trumps all other photography equipment. If going after one’s rivals was not enough, companies decided to push their lightweight, multi-camera setup against the heavyweight, OG photography champion in the industry, the DSLRs.

The end of this fight never looks pretty for smartphones but somehow it seems like the brands cannot help themselves (read our take here). From presentations, launch events to even full-fledged ad campaigns, they just love to pit their cameras against DSLRs. And the brand that has done so most recently and quite loudly is Xiaomi.

Xiaomi has launched a new ad campaign to promote the Mi 10 and the catch? It compares the cameras on Mi 10 with a DSLR.

The ad campaign called “Mi 10 Vs. DSLR” so far has three ads— “the problem of high maintenance”, “baggage issues”, “stability issues.” All of these three ads feature romantic couples where one of them is a person with a DSLR and the other is a normal person. The basic plot of these ads revolves around the breakup of each couple.
In the ads, the normal person (the one with a human head) is breaking up with the DSLR. Each ad highlights a different reason.

For instance, in “the problem of high maintenance” the person breaks up with his DLSR significant other because she is high maintenance. In the second ad, “ baggage issues” the woman is breaking up with her DSLR boyfriend because of his being difficult to carry around (“baggage issues), and in the third one, the guy ends it with the girl because of “stability issues”. The ads end with visuals of the Mi 10 on the screen and highlights of the camera specifications of the phone.

Breaking up and blaming it on Mi!

When we first saw the campaign we did not really think it would go down well for Xiaomi. But as much as we think this is a completely unfair and baseless fight, somehow Xiaomi has managed to make it at least entertaining. The brand has taken inspiration from real-life couples and their issues and has mirrored them in these ads in a satirical way. “The problem of high maintenance”, “baggage issues” and “stability issues” are some of the problems real-life couples break up over and issues that are synonymous with DSLRs. Xiaomi has very cleverly picked these troubles and used it to its advantage.

In under 30 seconds for each clip, the brand has managed to show how the Mi 10 is a better option than a DSLR. It has not gone into specifications (because duh!) but has taken up mostly cosmetic issues like how a DSLR is heavy, how it is high maintenance as compared to a smartphone ( obviously), and how it is difficult to keep it stable because of its heavyweight. We also love how the brand has utilized that most used break up line, “it is not you, it’s me” to its benefit and made it a pun. At the end of each ad the break-up-er, says “it’s not you, it’s Mi” to the break-up-ee suggesting they prefer the Mi 10 over the DSLR. 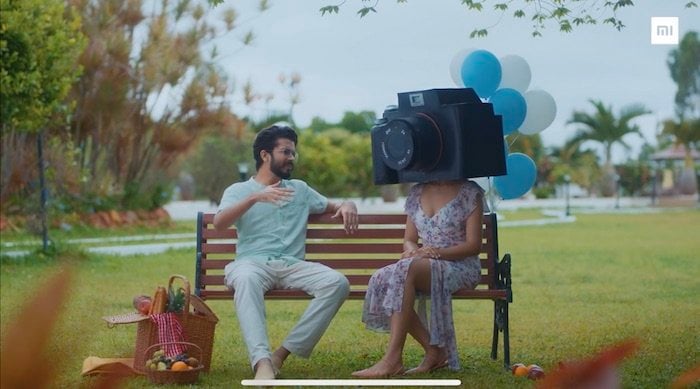 The ads are short, clever, and funny. It might be foolish of Xiaomi to compare its smartphone with a DSLR but the brand has picked its battles carefully and has only taken a dive on the pool of issues that would help it overtake its rival.

The core concept of “Mi 10 Vs. DSLR” maybe a little frivolous in our books but there is no denying that we still like this ad campaign. It mirrors some really sad and serious real-life scenarios and has painted them funny with its clever usage – the “high maintenance” ad for instance shows the DSLR-faced girl sitting in front of a mirror with a camera cleaning kit and handling it exactly if it were a make-up kit. Similarly in the case of “stability issues,” the DSLR faced girl goes “we can get help” and holds up…a gimbal. Clever, very!

It has been some time since we saw a good ad campaign from Xiaomi. Just when we were losing hope in the brand’s ad abilities, it finally released a campaign to save its ad day. Don’t worry, DSLR, we are not giving you away, but in this particular series of ads, it is not you, it is Mi.

Was this article helpful?
YesNo
TechPP is supported by our audience. We may earn affiliate commissions from buying links on this site.
Read Next
Xiaomi Pad 5 Review: Taking on the iPad
#DSLR #Mi 10 #Tech Ad-ons #xiaomi