Qualcomm Snapdragon 888: Everything You Need To Know

A closer look at the chipset that will power the upcoming flagship phones!

Qualcomm’s Snapdragon chipsets power a majority of Android smartphones in the budget, mid-range, and high-end segment. While the chip designer announces a few new chipsets through the year, it’s in December that we get to see their top-of-the-line offering for the year — one that powers the premium flagship smartphones in the following year. Continuing with the trend, this year, the company has announced the Qualcomm Snapdragon 888 chipset — the latest in the 800-series chipset lineup — at its annual ‘Snapdragon Tech Summit‘. As always, the latest silicon touts a range of improvements over its predecessor in areas like the CPU and GPU performance, ISP, and modem, and can be seen on smartphones starting next year. 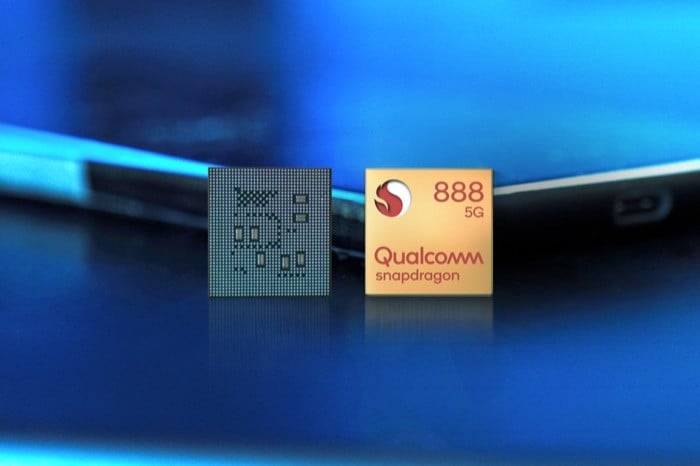 According to Qualcomm, the processing prowess of the Snapdragon 888 enables it to ‘transform flagship devices into a professional-quality camera, intelligent personal assistant, and elite gaming rig’ – all while using 5G speeds.

Let’s take a closer look at the specifications for the Qualcomm Snapdragon 888 chipset and find out how it fares with the last generation flagship chipset, the Snapdragon 865 (and Snapdragon 865+).

Performance has always been a top priority for both chip designers and consumers. And that’s pretty evident with the way mobile chips are becoming more powerful and efficient these days, and also with the selection patterns of consumers. Clutching on the same, Qualcomm claims to have packed in major architectural advances on its latest offering, the Snapdragon 888.

To begin with, the chipset is manufactured on the latest 5nm process. And as we have seen over the years, that should, ideally, result in an increase in the overall performance along with an improvement in power efficiency. As per the company’s claims, the Snapdragon 888 offers a 25% improvement in both performance and power efficiency compared to the previous generation. This seems possible due to the Kryo 680 CPU, which is built on top of the Arm Cortex-X1 microarchitecture (derived from Cortex-A78) and offers up to 2.84GHz of clock speeds. In comparison, the Snapdragon 865 is built on the 7nm process and uses the Kryo 585 CPU that boasts of a 25% improvement in performance and power efficiency over to its predecessor (Snapdragon 855 with Kryo 485). 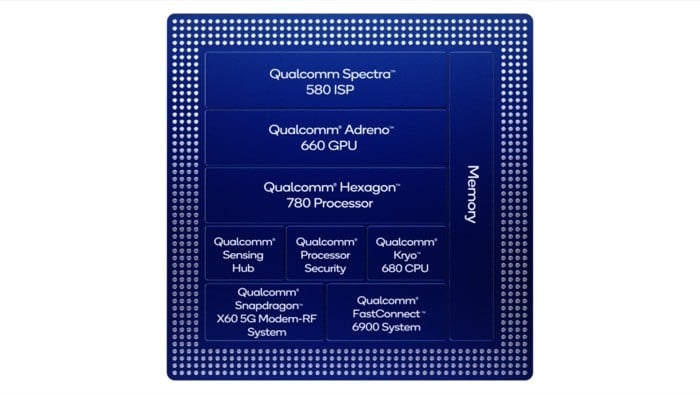 Moving on to the GPU, the company suggests a 35% boost in graphics rendering performance on the Snapdragon 888 compared to the last-gen offering. It also says that, while the chipset brings along an improvement in graphics performance, it still manages to stay 20% more power-efficient. To add to that, much like earlier generation Snapdragon chipsets, the SD888 also promises a sustained performance over long periods of time.

It is no surprise that smartphone gaming has grown staggeringly over the past few years and that the chip designers and various smartphone manufacturers have been striving to capitalize on that front since then — by incorporating a plethora of features to improve the gaming performance on a smartphone. With the all-new SD888, Qualcomm is back again with its ‘Elite Gaming arsenal’ that features a few new upgrades. The platform now comes with Variable Rate Shading (VRS), which promises to improve game rendering by up to 30% compared to the last generation chipset. Besides that, it also promises to offer improvement in touch response rate to reduce latency. The responsiveness on the new platform is claimed to be 20% better than its predecessor. Moreover, the boost in graphics processing also enables HDR features on mobile gaming and allows for framerates of up to 144fps. 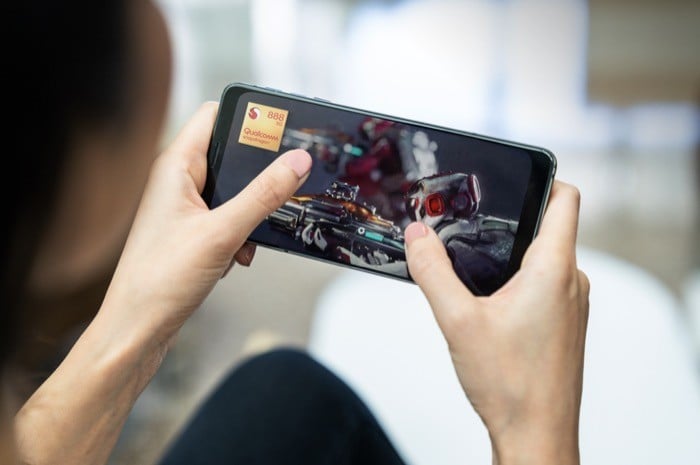 AI is slowly becoming another crucial deterrent in the overall performance of a smartphone. It is no longer a gimmick used by smartphones to lure customers. Instead, it has become a core element in improving several aspects of a smartphone, like voice assistant, camera, gaming, security, etc. The Snapdragon 888 continues where its predecessor left off and promises a series of improvements. Moreover, Qualcomm says that the SD888 ‘takes the biggest architectural leap forward in AI.’ The platform now uses the 6th-generation AI engine powered by the Hexagon 780 processor. This latest processor touts improvements in fields like gaming, camera, voice assistant, and connectivity. All of which claim to offer up to three times performance per watt improvement over the prior generation. To give you some context, the Snapdragon 865 uses the Hexagon 698 processor and manages 15TOPS, whereas the Snapdragon 888 with its Hexagon 780 processor takes that up to 26TOPS. 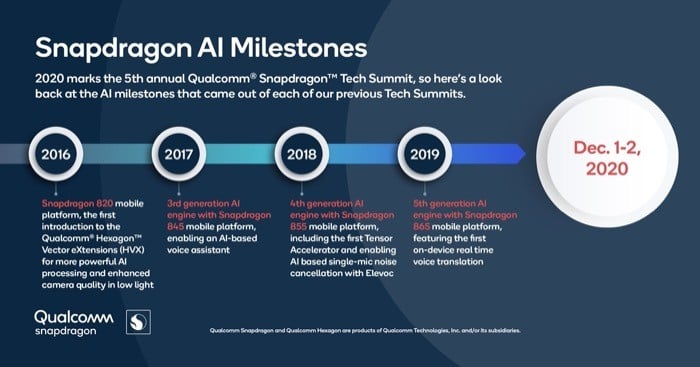 What’s more, the platform incorporates the 2nd-gen Qualcomm Sensing Hub, which has an integrated (dedicated) low-power AI processor to allow for better intelligence and contextual awareness that assists with use-cases such as activity detection and screen awake.

What initially started as a hype is slowly making progress to become the go-to mobile network standard, and in a matter of a year, has managed to garner the attention of various smartphone brands, who are now onboard the 5G train. While the Snapdragon 865 took a ‘non-integrated’ approach with its modem implementation, the Snapdragon 888 brings back an integrated modem. It employs the Snapdragon X60 5G Modem-RF System that includes support for sub-6GHz and mmWave to offer faster transfer speeds, up to 7.5Gbps (down) and 3Gbps (up). The X55 Modem-RF System on the Snapdragon 865, on the other hand, also offers similar download and upload speeds. Moreover, the two platforms share support for Dynamic Spectrum Sharing (DSS), FDD & TDD, NA & NSA modes, and sub-6GHz and mmWave. However, since the new platform has an integrated modem system, it should allow for a more efficient network performance on the devices running the SD866 chipset. For, the Snapdragon 765, which has an integrated (Snapdragon X52) modem, has proven to be a very capable chipset with regards to 5G performance. 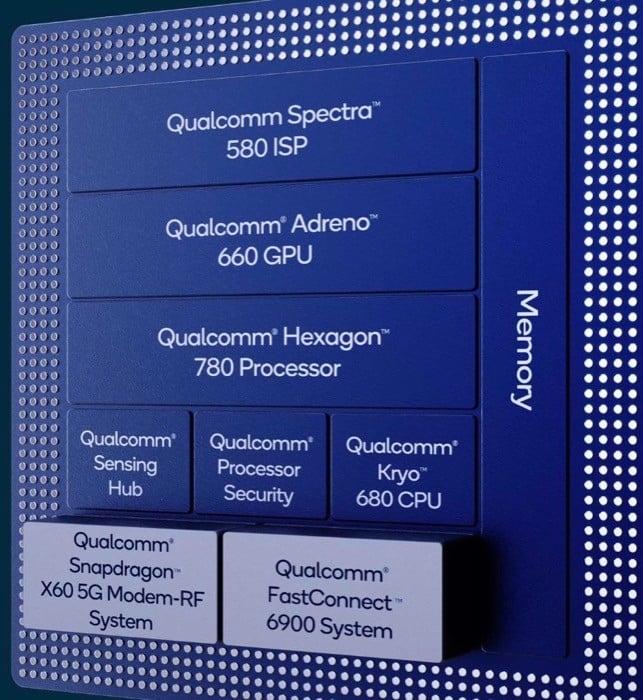 As for Wi-Fi connectivity, the Snapdragon 865 was ‘Wi-Fi Certified 6’ and included a few features to improve the overall Wi-Fi performance. The Snapdragon 888 builds on the same and comes with the FastConnect 6900 Mobile Connectivity System that brings along support for Wi-Fi 6 and Wi-Fi 6E (6GHz) with up to 3.6Gbps transfer speeds. In addition to that, it also enables support for Bluetooth 5.2 — absent on the Snapdragon 865 but reintroduced on the SD865+ — along with dual antennas and Qualcomm aptX suite support for high-quality audio.

Moving on to camera performance, which has become a key deterrent for consumers buying a smartphone these days, the Snapdragon 888 chipset aims to take that performance a step further. It features the Spectra 580 ISP that packs in triple 14-bits ISPs and allows for capturing from three cameras simultaneously at up to 2.7 gigapixels per second. That number translates to a 35% speed increase when compared to the last-gen chipset with the Spectra 480 ISP, which peaked at 2 gigabits per second of processing speeds. The new ISP retains support for up to 200MP camera and brings along support for up to 28MP triple cameras, up to 64MP + 25MP dual cameras, and up to 84MP single camera — at 30fps. Since now, instead of guessing which sensor the user would switch to for capturing a shot, the ISP now allows all three sensors to run in the background and switch to the one (that the user) picks instantly. 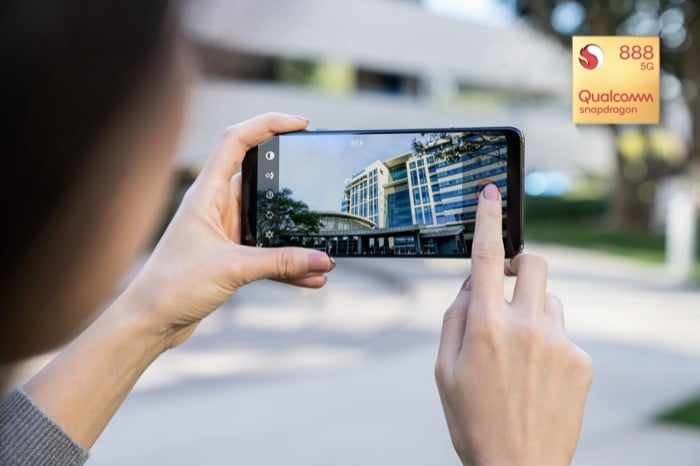 Besides, the new chipset also comes with a low-light architecture to provide brighter results in dark settings. As for video shooting capabilities, the new ISP allows for 8K video recording at 30fps and 4K recording at 120fps. In addition, it also brings 4K HDR recording with portrait mode to allow for more detailed output.

Qualcomm’s Snapdragon 888 allows for up to 16GB of RAM, with support for LPDDR5 memory up to 3200MHz and LPDDR4X up to 2133MHz. In terms of charging technology, the latest offering brings Quick Charge 5, which is an upgrade over the QuickCharge 4+ on the Snapdragon 865. Although, that said, even though the new standard was announced earlier this year, the Snapdragon 865 and 865+ also support it. To give you an idea of what QC5 offers, the standard promises support for over 100W charging power, with a charge from 0 to 50% in just five minutes. Besides that, it also employs security checks to protect the battery from being exposed to high voltages. 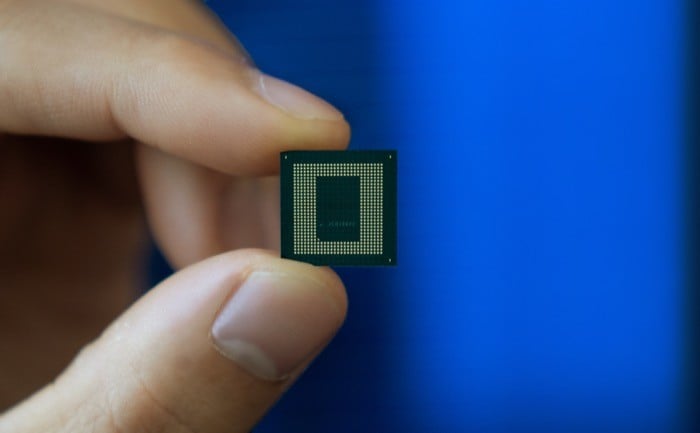 Besides, the Qualcomm Snapdragon 888 features improvements in the security department with the introduction of a new Type-1 Hypervisor that enables the device to secure and isolate the data between different apps and operating systems. Additionally, the hypervisor also allows quick switching between isolated operating systems. 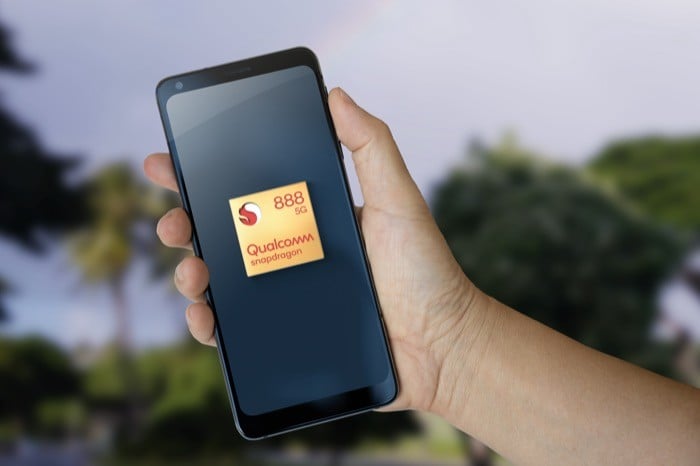 Qualcomm says the Snapdragon 888 mobile platform is expected to be commercially available in the first quarter of 2021. As we learned yesterday, Xiaomi’s next flagship device, the Mi 11, will be among the first devices to run Snapdragon 888. And adding to the list, we also have OEMs like ASUS, Black Shark, Lenovo, LG, MEIZU, Motorola, Nubia, Realme, OnePlus, OPPO, Sharp, Vivo, Xiaomi, and ZTE.