[Face off] Xiaomi Mi 10i vs OnePlus Nord

They are perhaps the first two phones that are going to come to most people’s minds when they think of a good smartphone in the price range of Rs 20,000 – Rs 30,000. And while each is formidable in its own right, they both come from not just different brands, but with very different feature sets and philosophies. So which of them is the best option for you? The bestselling OnePlus Nord or the new challenger, the Mi 10i? We try to figure that out for you. 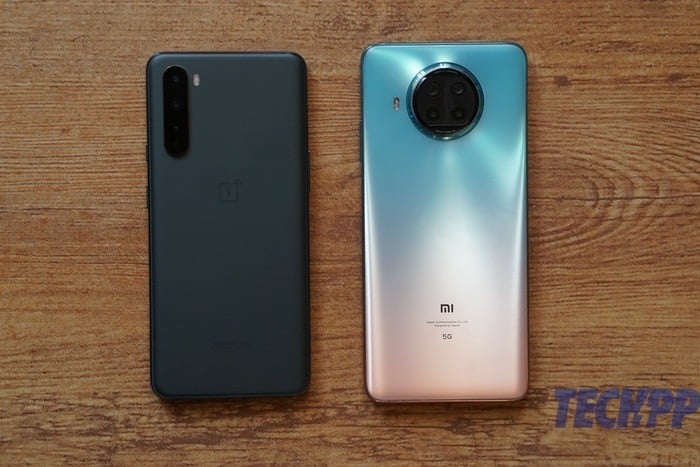 This is a very tough one for us. We like the design of both phones, but for very different reasons. Both phones have glass front and backs, but the Mi 10i has a more distinct camera unit (a spherical one) while the Nord goes with a more conventional capsule-shaped one.

The OnePlus Nord (especially the Gray Ash variant) is very subtly classy, but the Mi 10i (especially the Pacific Sunrise variant) just turns heads the moment you look at it. The Nord is much more compact than the Mi 10i – 158.3 mm x 8.2 mm as against 165.38 mm x 76.8 mm x 9 mm – which makes it way easier to handle. It is also lighter at 184 grams against the 214.5 grams of the Mi 10i. So yes, if being compact counts, then the Nord wins this one easily. That said, the Mi 10i looks downright spectacular and literally grabs your eyes. It is like choosing between a denim jacket with flashy buttons and labels and a smart tuxedo – each will have its takers. Or trying to make up your mind between Ethan Hawke and James Bond. We love both. We are calling this a tie, although some might be tempted to hand this one to the Mi 10i because of its IP53 splash resistance.

Display: A refreshing battle between AMOLED and LCD 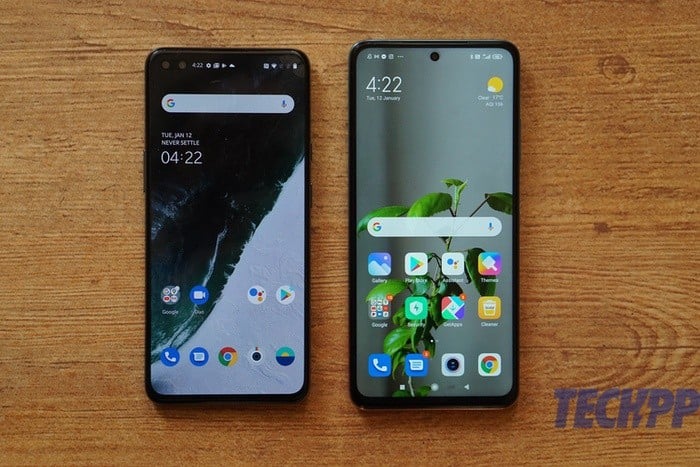 This is perhaps the most intriguing battle of the lot. The OnePlus Nord comes with a 6.44-inch full HD+ fluid AMOLED display with a 90 Hz refresh rate, while the Mi 10i comes with a 6.67-inch full HD+ LCD display with a 120 Hz refresh rate. Yes, we know there are those who worship on the deep, rich black altar of AMOLED, but for most general usage, we must confess that we found the Mi 10i taking the edge. Was it the slightly bigger display or the refresh rate (which we frankly still cannot really notice except while scrolling)? We cannot say, but we are scoring this for the Mi 10i. 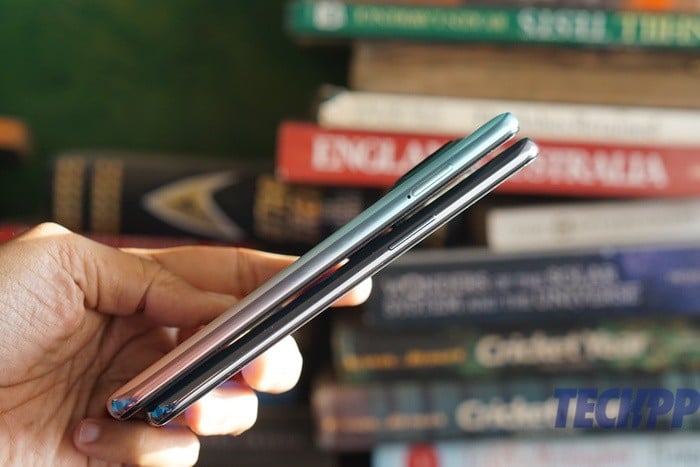 The “battle of hearts” in these two devices is between the now-senior Snapdragon 765G and the new Snapdragon 750G. Now, both of these are formidable upper mid-segment chips, and picking between them is a tough task. The 750G has nudged the 765G in some benchmarks and is the newer chip, but the 765G by general consensus handles gaming a little better. It is a very tough choice, and all things said and done, we are going for a tie here, as the difference is not detectable.

Winner: Tie. It’s not about the numbers, folks.

Storage and RAM: How much memory you got?

This is an interesting one. Both phones have 6 GB and 8 GB RAM variants, but the Nord brings a 12 GB variant to the table as well. Similarly, while both devices have 64 GB and 128 GB variants, the Nord has a 256 GB one. Eroding the OnePlus’ sheer numbers however is the fact that the Mi 10i comes with expandable memory, with support for a microSD card on a hybrid SIM slot. We are handing this one to the Nord, but it is a close call.

Winner: OnePlus Nord. A dozen gigs of one, and 256 gigs of another win! 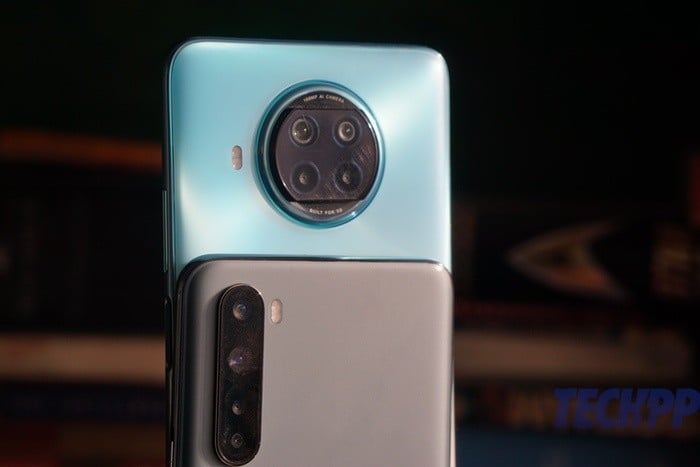 Not surprisingly, this turns out to be remarkably lop-sided. Yes, the Nord’s camera performance has improved thanks to a few updates since its launch. And yes, it also comes with OIS, which the Mi 10i lacks. But all said and done, the Nord’s 48-megapixel main sensor is no match for the 108-megapixel one on the Mi 10i. We consistently got richer colors and more detail on the Mi 10i. The Nord does hold its own to an extent in videos and low light snaps, but even there, the Mi 10i more often than not emerged as the winner. Mind you, in both cases, we did feel that the accompanying three cameras – the 8-megapixel ultrawide, 2-megapixel depth, and 2-megapixel macro cameras are really so much more decoration than performance, especially when compared to the main sensors. The Nord is a decent snapper in its segment, but the Mi 10i is an exceptional one. 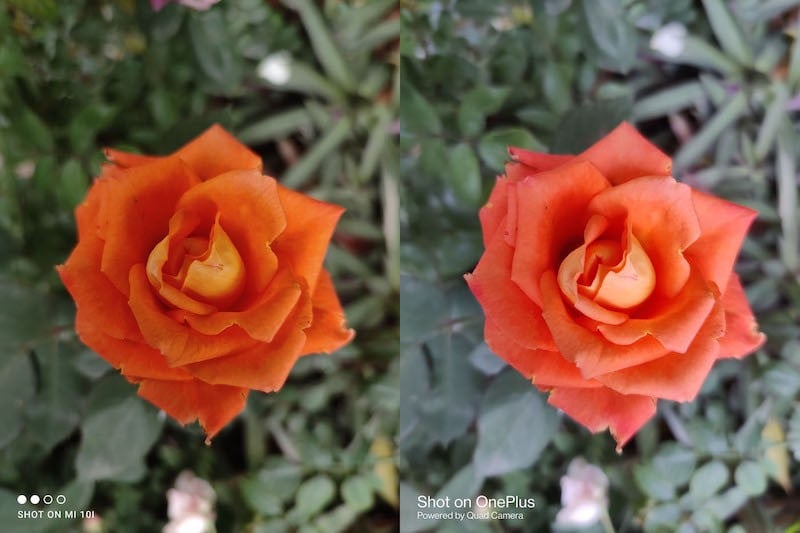 Selfie cameras: Can one beat two?

All right, this one was a surprise. We expected the dual (32+8 MP) selfie cameras to beat the Mi 10i’s single 16 MP snapper. Well, it did not happen. In fact, we got richer colors and better portrait handling on the Mi 10i. Yes, the Nord did deliver more detail and a wider perspective, but the Mi 10i almost always delivered better-looking selfies. Our vanity gives this one to the Mi 10i. And we are surprised. 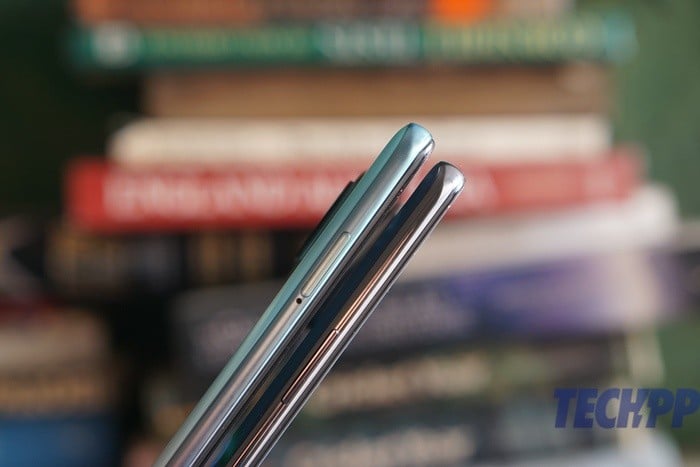 When it comes to gaming, both phones are very closely matched. In terms of sheer smoothness, we feel that the Nord has a slight edge because titles like Call of Duty and Asphalt seemed to run just that bit more smoothly on it on high settings. That said, the Mi 10i gets you a bigger display and does deliver way better sound because of its stereo speakers. Its 3.5 mm audio jack also makes it more friendly for gamers with cabled headsets. Still, all said and done, we would score this one to the Nord for the gamers and the Mi 10i for the video watchers. Pushed to pick one, we guess the Nord just about wings it. Just about.

Winner: OnePlus Nord. But the Mi 10i is close.

Multi-tasking and general performance: How much appiness can you handle?

When it comes to running multiple tasks and apps, we found both devices to be pretty much equal. There was not much to separate them. The Nord’s smaller size made it a little easier to handle but then all that extra display real estate on the Mi 10i makes viewing content a much better experience, and once again, its sound quality makes a difference. We also found the Mi 10i’s side-mounted fingerprint sensor working more smoothly than the in-display one on the Nord. Call quality, however, seemed marginally better on the Nord. We are calling this a tie. (No, we are not factoring 5G yet, because we cannot test it, because hey, it is not available yet).

This is the one department that is a complete and utter no-brainer. The Mi 10i comes with stereo speakers and a 3.5 mm audio jack, both of which the Nord lacks. Audio game over!

Winner: Xiaomi Mi 10i. A 3.5 mm audio, stereo speakers…are you getting Mi!

Interface: Am I UI or do U and I need Oxygen?

This is a massive battle. And honestly, a year ago, a OnePlus device would have had a Xiaomi one on toast. A year is, however, a long time, and fast forward to 2021, and the difference between the two interfaces is more a clash of cultures than quality. The Nord reflects OnePlus’ minimalistic and relatively clean interface through Oxygen UI (although not too many are happy with the recent changes to it), whereas the Mi 10i runs on MIUI 12, which very feature-rich. Which one you like is a matter of taste. Both are currently on top of Android 10, which is a bit of a pity, but then updates are expected. Speaking personally, we think that MIUI allows you to do much more with the device out of the box, but then Oxygen UI gives you more space to do your own thing. As we said, it is a matter of preference. We are calling this one a tie. It would not have happened a year ago when MIUI was plagued with ad issues but it seems to have resolved most of them now.

Winner: Tie. Pick whether you want to install features, or want them out of the box! 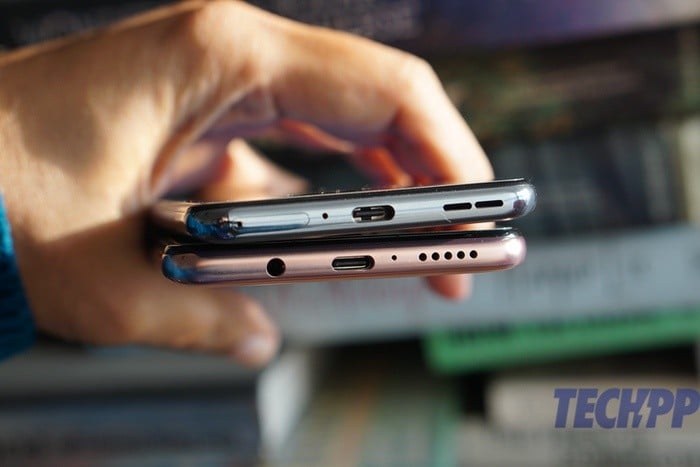 Getting into the battery zone, this turns into a battle between a 4820 mAh battery on the Min10i and a 4115 mAh one on the Nord. That might seem to kill it off then and there, but the fact is that the battery on the Nord has to power a smaller display with a lower refresh rate. That said, the Mi 10i does comfortably outlast the Nord here, with its battery lasting close to a day and a half while the Nord sees off a day. In terms of charging, the Mi 10i comes with a 33W charger while the Nord comes with a 30W one. Both get charged in about an hour or so, but considering the Mi 10i’s battery is bigger, its performance is more impressive. Another round to the Mi 10i.

Winner: Mi 10i. It lasts longer and actually charges faster.

Winner: Mi 10i. Saves you more than the odd pretty penny, or make that “pretty paisa.”

Final: Pretty Much Everything You Could Ask For Or The Perfect 10? 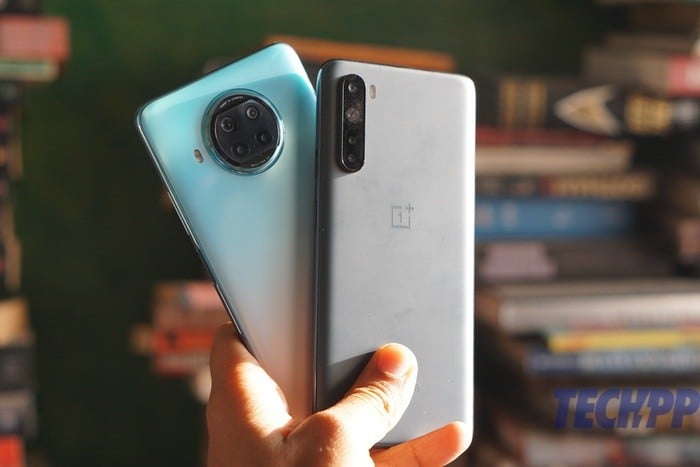 So which one should you go for? Well, on paper it looks like a cakewalk for the Mi 10i. The new Xiaomi smartphone beats the Nord hands down in departments like camera, battery, audio, and display, and also comes for a much lower price – as we pointed out, the highest (8GB / 128 GB) variant of the Mi 10i comes with a lower price tag than the base (6 GB/ 64 GB) variant of the OnePlus Nord. However, that is not to say that the Nord does not have anything going for it. There are many who would prefer its more compact and lighter form factor, subtly classy design, and relatively cleaner interface. And well, if you are into spec counts, the Nord is the only device of the two to come with a massive 12 GB / 256 GB variant.

As always, it is really going to boil down to what YOU really value. But in our book, the Mi 10i does have a clear edge over the Nord at the time of writing.

The “premium mid-segment” has a new champ and the ball is now in the Never Settler’s court.