When Amazfit sent us their T-Rex smartwatch last year, we were instantly a fan of the design and build of the watch as it reminded us of Casio’s G-Shock line-up that is undoubtedly one of the most rugged watches out there. Apart from looks, however, the rest of the package offered by the Amazfit T-Rex was similar to most smartwatches sold by Amazfit. 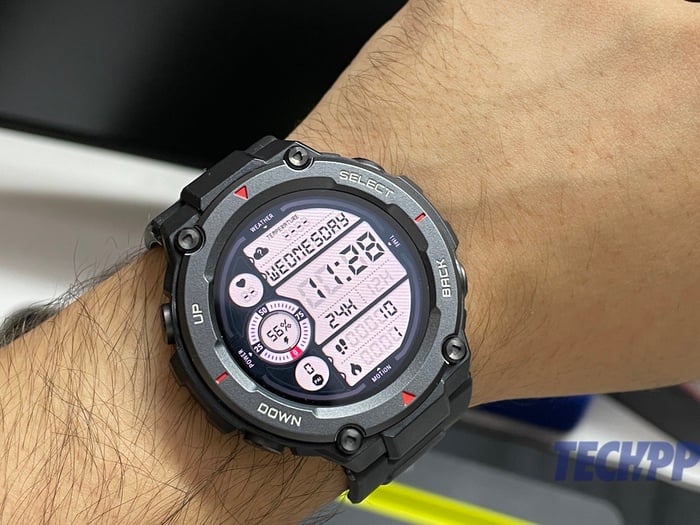 Several workout modes, in-built GPS, steps and sleep tracking, a heart-rate monitor, essentially features aimed towards fitness enthusiasts. Right from the beginning, we have been vocal about smartwatches that are not essentially smart and are just glorified fitness trackers with bigger displays packed into the body of a smartwatch. What this means is that if you don’t mind a wearable on your wrist that looks like a band, you can save a good amount of money by getting yourself a fitness tracker that does most things minus a few here and there.

While one may argue that design and looks are among the primary factors for most people looking to buy a gadget that also acts as a fashion accessory, we are not sure to what extent it justifies a price tag that’s more often than not 4-5 times higher than that of a good fitness tracker. By now, you know where this review is going. Amazfit recently launched an updated version of the T-Rex and is calling it the T-Rex Pro. It looks quite similar to the T-Rex with bold and rugged design choices and feels like it can get run over by a truck and get away unharmed. 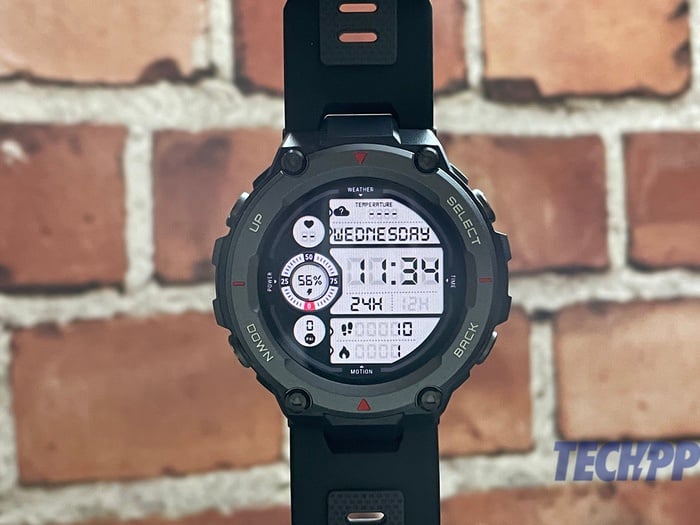 But, that’s not what we are focusing on here. Unlike all the other Amazfit watches we have reviewed in the past; this is not going to be a conventional should-you-buy-it guide. If you are here for that, here is a quick summary of our experience using the Amazfit T-Rex Pro for over two weeks.

It looks great on your wrist provided you’re fine with its slightly bulky look, the straps feel comfortable on your wrist, the AMOLED display looks sharp and is ample bright outdoors, fitness functions are aplenty and the accuracy is top-class, there’s SpO2 monitoring, in-built GPS, an Altimeter, Barometer, and Compass which are helpful when you’re hiking, it is MIL-STD 810G Certified and is water-resistant up to 100m, it lasts about a week on a single charge with Always-on display enabled, and the UI is snappy. Everything is controlled by the Zepp app which is polished and has a ton of settings and watch-face options. 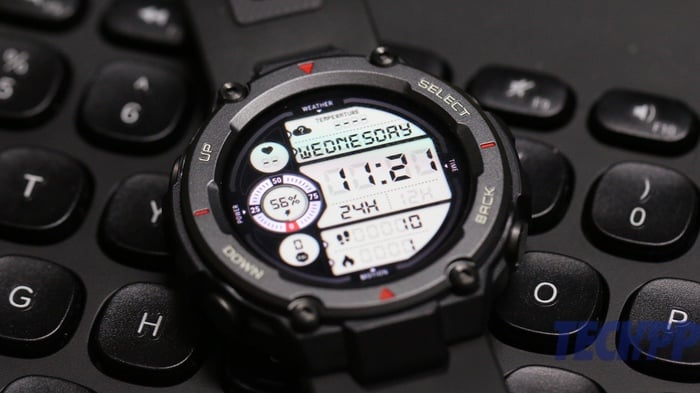 The experience is pretty solid and the upgrades from the T-Rex include better notification management and a host of new sensors that fitness enthusiasts will appreciate. That’s pretty much it. For Rs. 12,999, we would recommend the Amazfit T-Rex Pro to anyone looking for a rugged smartwatch that nails most of the fitness features.

If you were here just for the verdict, well, you have it now. That’s our review of the Amazfit T-Rex Pro. We could call it a day at this point, but there’s something important that needs to be discussed about Amazfit as a brand, their product line-up, the features their smartwatches offer, and why we feel they need to adopt a less-confusing approach. 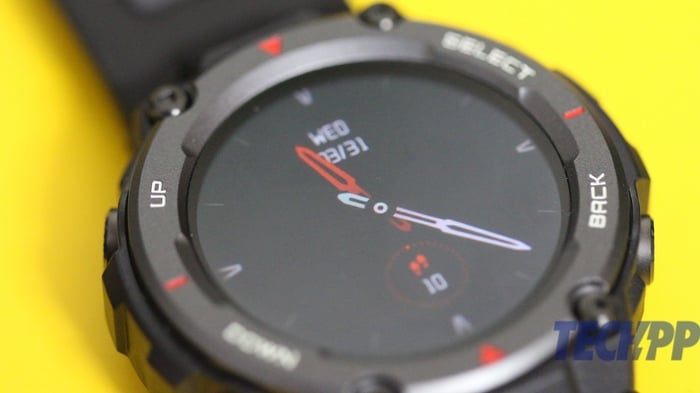 Let us start with the T-Rex Pro itself since it is Amazfit’s latest offering. When compared with the T-Rex that was launched last year, the T-Rex Pro does bring in some upgrades but, in our opinion, they aren’t much to warrant for a refresh with a ‘Pro’ tag, especially in the software department. All of Amazfit’s watches, including the T-Rex Pro, run on RTOS or Real-time Operating System. Using RTOS ensures that the UI is smooth and battery life is great, but it does not offer nearly as many ‘smart’ features that something like Google’s WearOS or Samsung’s Tizen OS offer.

As a result, some key features that make a smartwatch ‘smart’ are missing. The ability to reply to notifications, install apps, set reminders, use a voice assistant, make calls, store music offline, etc. These are features that are available in smartwatches from other brands in a similar category/price bracket. The Oppo Watch, for example, offers way more functionality and so do many smartwatches from Fossil or TicWatch that run WearOS. 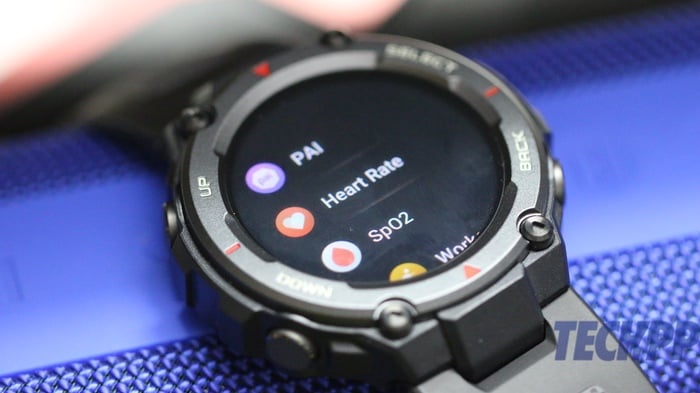 Now, it is understandable that Amazfit is relying on its custom OS to save on licensing fees for WearOS, and the fact that running a more complex OS would mean they would have to use better processors and compromise on battery life. So, let’s just set aside the possibility of using WearOS. The real confusion sets in when you know that Amazfit has introduced smarter features in their OS on some other smartwatches like the ability to make calls on the similarly-priced Amazfit GTR 2 and Amazfit GTS 2 or support for Alexa on the much cheaper GTS 2e.

The T-Rex Pro misses out on all of these additional functions and takes a step back to the software similar to the original T-Rex in spite of charging a premium. While they could be using this as a strategy to differentiate between multiple products in their portfolio that are priced similarly, the fact that smartwatches from Amazfit costing half of what the T-Rex Pro does also get these additional features is ironic. 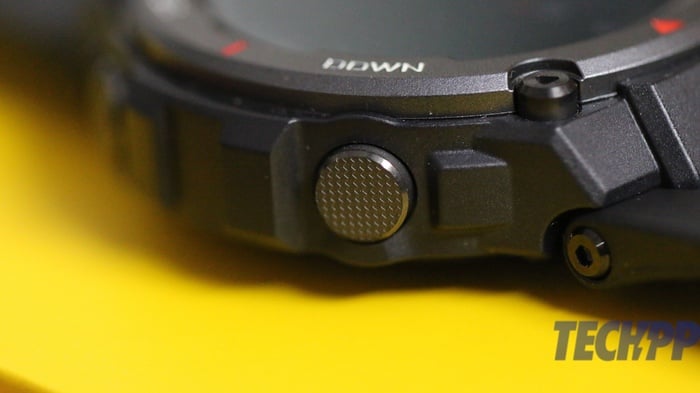 Moreover, Amazfit has multiple smartwatches with the exact same feature set with minor differences like battery capacity but with slight variation in price which just makes it all the more confusing for the end consumer to decide which smartwatch they want to buy. For example, if someone wants to buy a smartwatch from Amazfit specifically and has a budget of Rs. 12-14k, the new T-Rex Pro is a good option, but a quick comparison shows that the GTS 2 offers features like Bluetooth calling, 3GB of Music storage, and just 10 sports modes lesser than the T-Rex Pro for the same price.

Then, there’s also the GTR 2 which offers everything that the GTS 2 does but has a smaller dial and also costs the same Rs. 12,999. Funnily, the more affordable versions of the GTS 2 and GTR 2 which are the GTS 2e and GTR 2e come with support for Amazon’s Alexa voice assistant at half the price starting at Rs. 6,999 while the GTS 2, GTR 2, and the T-Rex Pro don’t have it. This is bemusing given that the software running on all these smartwatches are very similar so there’s no reason why some features need to be excluded from some watches, especially ones that are more expensive. 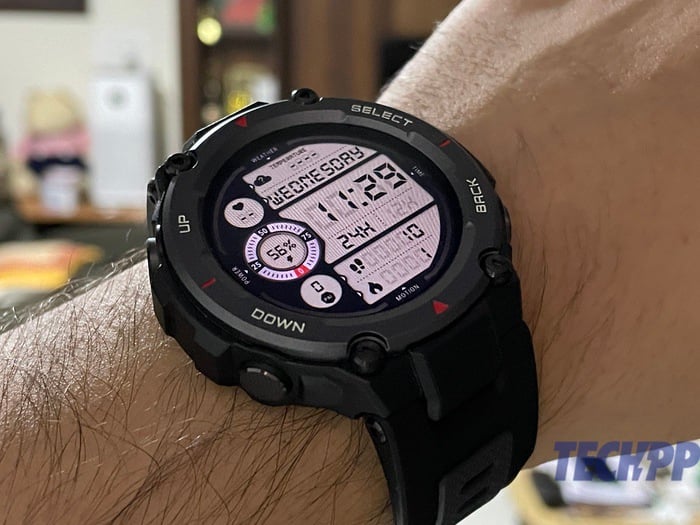 All this brings us to the fact that while we love the rugged look of the T-Rex Pro and all the new improvements that it brings, Amazfit’s own offerings that are ‘smarter’ and carry the same or even a cheaper price tag has increased our expectations from the brand in terms of features. There’s just nothing new that these smartwatches from Amazfit bring to the table in terms of how smart they are which is just making things a little mundane. For a lot of these smartwatches from Amazfit, we can literally copy-paste the same review for multiple watches and you wouldn’t even realize, which shows that not a lot has changed between new models.

Amazfit has been a go-to brand in terms of smartwatches in India. Their hardware is solid, their fitness tracking algorithms are accurate, and the brand has built a reliable repute. While a lot of this still remains true, we just hope Amazfit makes their portfolio more streamlined and standardizes their software and smart features across their line-up, at least in the premium segment. We would also like to see some added features like the ability to reply to notifications or set reminders straight from the watch itself. 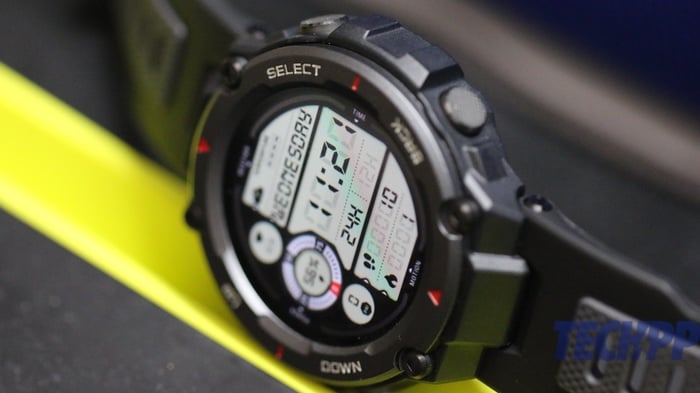 We will look forward to the next batch of smartwatches from Amazfit to see how much of an improvement they have actually made and if they bring anything new to the table. Given Huami’s expertise in this field over the years, they can easily outdo most other smartphone brands who are trying their hand at smartwatches by offering something unique, and we really wish that happens soon.