It might have taken its time to arrive, but Redmi has arrived at the smartwatch party. And its first smartwatch, simply called Redmi Watch, sticks to the brand’s fundamentals of delivering a fair bit of value for not too many bucks. But this time, its price might not really be considered “killer” by its own rather high standards. 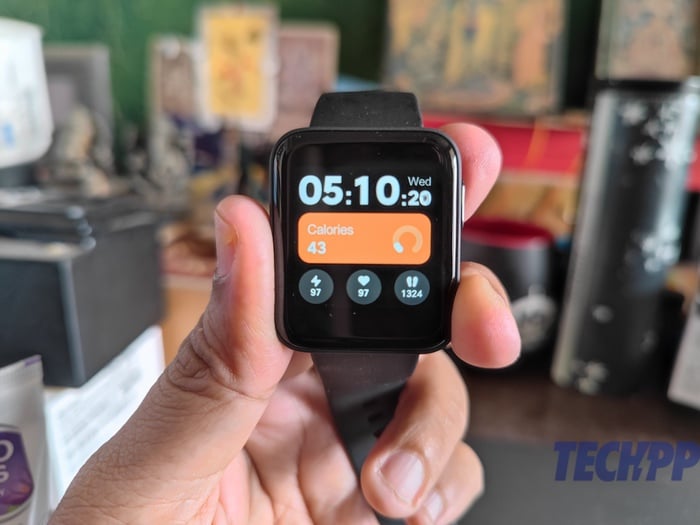 The watch gets most design basics right as well. The Redmi Watch comes with a large-ish 1.4-inch 2.5D curved glass display of 320 x 320 resolution. It has rather prominent bezels around it, which might bother some, but did not annoy us all that much. And the reason for that is that the display is rather bright. Yes, 350 nits might not sound like much, and this is not an AMOLED display either (it is a TFT LCD), but it certainly is good enough for seeing content, even in bright sunlight. A neat touch is the auto brightness option which tailors the brightness of the watch as per the lighting conditions. That said, this is not an always on display, although the raise to wake functionality seems to work well enough.

The watch itself is made of plastic but seems sturdy enough and comes with TPU straps that are soft enough and so far have not raised any sort of hell with our skin. There is a single button on the upper right side of the watch, which allows you to access the menu and also wake up the watch. It is an easy to find and hit button even though it does not protrude much. You can also navigate through different options using the touchscreen display. 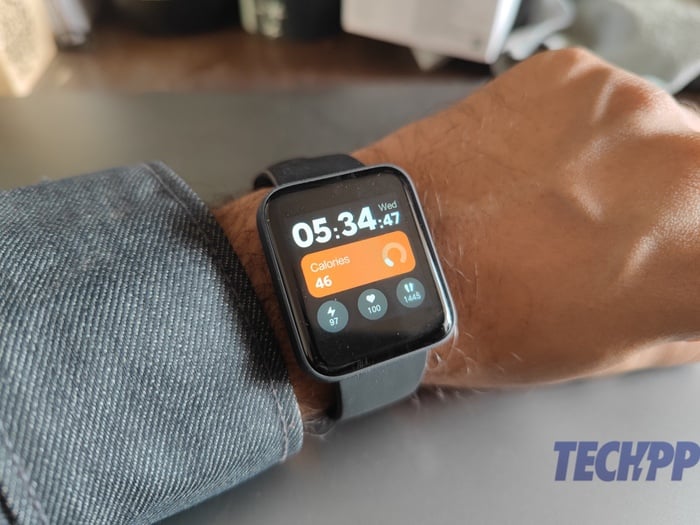 The watch is relatively lightweight at just 35 grammes and it is visible without being ostentatious. There are plenty of watch faces to choose from (more than 200), including one that seems rather similar to Apple’s “complications” watch face on the Apple Watch, letting you see the time and some fitness information right up front. The watch is not going to scream for attention from your wrist but it is smart enough to be worn even informally. It does not look cheap, if you know what we mean. And it comes with 5 ATM water resistance, so you can actually take it swimming.

Fit for tracking fitness (but not for blood oxygen) 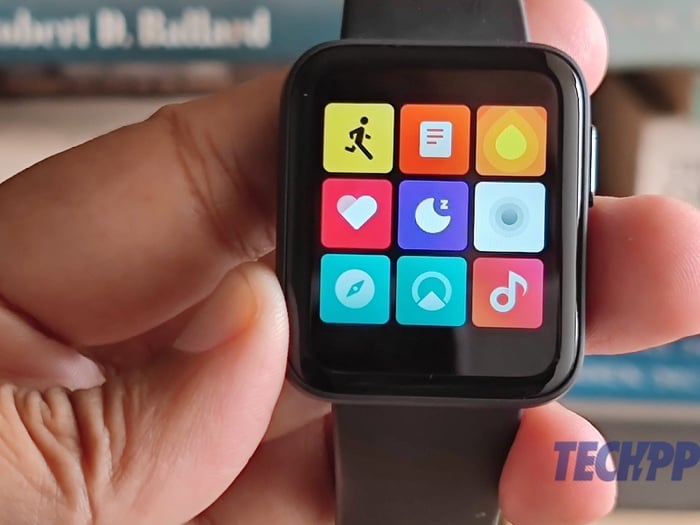 That is the external smartness. On the internal smartness front, the watch runs on Real Time OS (RTOS), which is similar to what we have seen on the Mi Watch Revolve and the Realme and OnePlus watches. Which means it will be good enough for fitness data and basic notifications and will be good on the battery front, but will not have the sort of third party app support that an Android Wear watch would have. 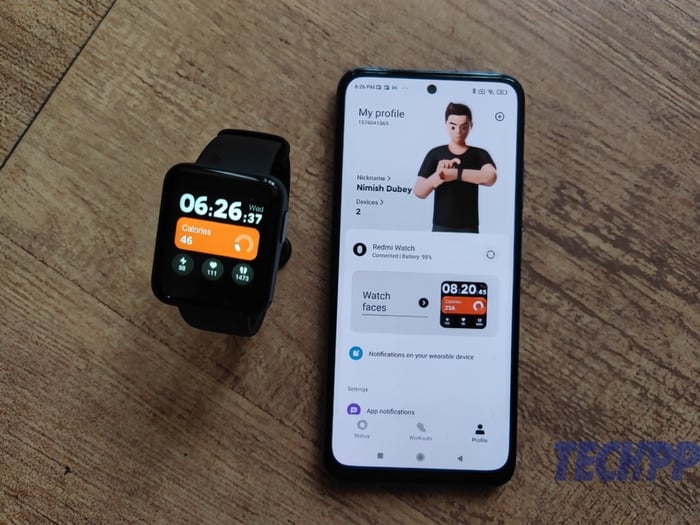 There is still plenty on offer here. The watch does serve up notifications from social networks and messages and mail, and you can also control music from it (although there is no camera control). On the fitness front, a huge plus is the presence of GPS for better tracking of runs, even when you do not have your smartphone handy. There is a heart rate sensor on the back of the watch as well. The watch can track your heart rate throughout the day, can track sleep, walk you through breathing exercises, and also has 11 professional sports tracking modes (including cricket, swimming, hiking and a few others). There is also a barometer for measuring air pressure and a compass for those who like to have a sense of direction. Of course, it does the regular stuff like calorie and step counting. The watch pairs with both Android and iOS devices using the Xiaomi Wear app, over Bluetooth. Pairing is a smooth process. 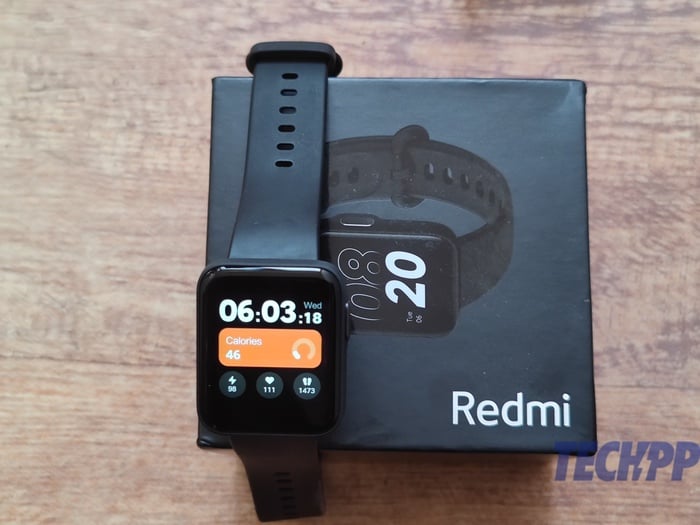 There are however a couple of misses here. The watch does not have a blood oxygen measuring option – something that has become almost a staple feature even on fitness bands from other brands because of the COVID pandemic (a falling blood oxygen level is one of the surest signs of your having being infected). Xiaomi told us that this was because it was not sure it could provide a reliable enough measure of oxygen, and while we appreciate the logic, it is difficult not to notice the feature’s absence, especially when it is available on trackers that have much lower price tags. Another missing feature is women’s cycle tracking, a feature that was present on the Mi Band 5.
The watch has a battery life of about 10 days and a recharge time of less than two hours thanks to its own charger. The charger is a little on the bulky side (it is slightly bigger than the watch) and has to be inclined on the side to landscape mode if you are charging the watch without removing the strap. A neat touch is that when you are charging the watch, the display actually rotates to landscape mode and shows you the time as well as the battery level.

Watch out, it has competition 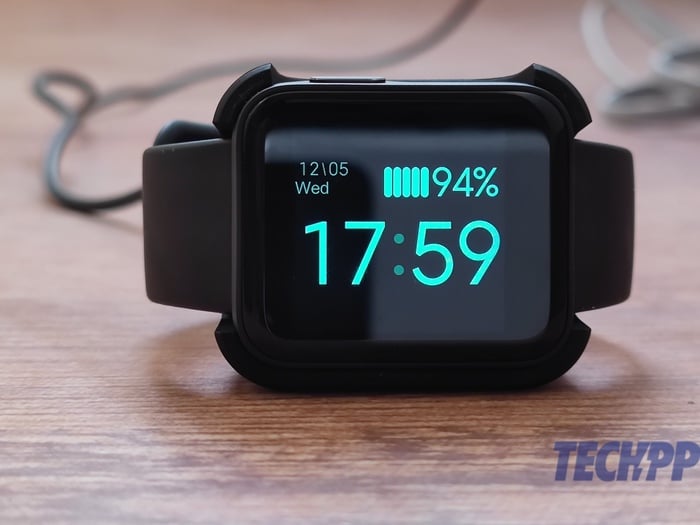 At Rs 3,999, the Redmi Watch seems to be a solid rather than spectacular debut. It does face competition from the likes of the Amazfit Bip U which comes with more sports modes and also blood oxygen measurement and the Noise ColorFit Pro 3 which comes at a slightly higher price but has a bigger display and blood oxygen monitoring. There is also the Goqii fitness tracker at around the same price, which has a smaller display but comes with a number of features as well as three months of personal coaching. And of course, there is the always looming threat of less expensive and more feature rich fitness bands, including Xiaomi’s own Mi Band 5!

The Redmi Watch might have arrived at the smartwatch party. But how long it will stay, and how many flock to it, will depend on its performance. For, rather oddly for a Redmi product, it does not seem to enjoy a major price advantage. Stay tuned for our review to find out how it fares.

Was this article helpful?
YesNo
TechPP is supported by our audience. We may earn affiliate commissions from buying links on this site.
Read Next
Redmi Pad Review: Just Buy It!
#First Cut #First Impressions #Redmi #Redmi Watch