It was the OnePlus that sneaked into the flagship show. The One(Plus) that proved that the brand still had flagship killing somewhere in its digital blood. Yes, OnePlus did position it as a gaming device, but let’s get one thing clear – the OnePlus 9R was more about being the most affordable flagship in the OnePlus 9 series. 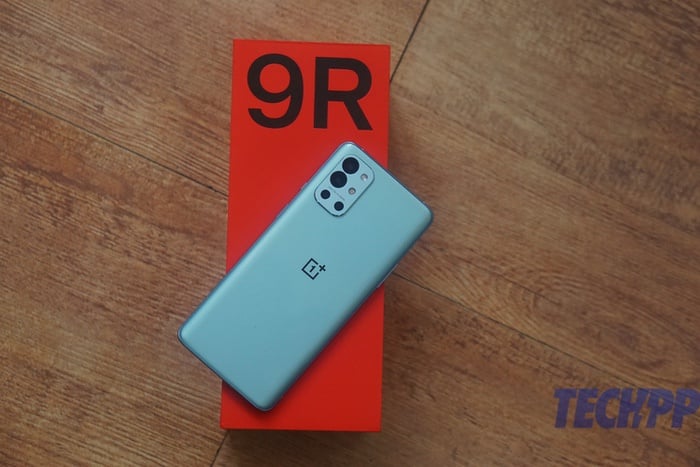 And well, more than a month after it hit the market and after its own share of updates (hey, this is a OnePlus), the OnePlus 9R does give us some very classic OnePlus feels. The design, which we covered before in our first cut, follows the template of the OnePlus 9 series, which is good, although some might find it being a little too similar to the OnePlus 8T. We think it is a good-looking phone, though. It is slightly bigger than the OnePlus 9, although both have similar display sizes (6.55 inches), and feels good to hold. Like the OnePlus 9, it also has no IP rating, which is a pity at this price point.

Losing out a little on chip and camera 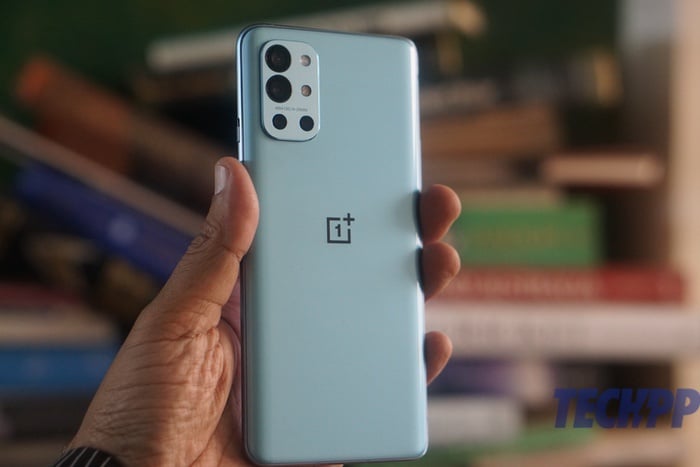 The big question asked about the OnePlus 9R is of course about what corners were cut to get its price tag. After all, at Rs 39,999, it is exactly Rs 10,000 behind the OnePlus 9. But unlike the Nord, it does not claim to be mid-segment and is pretty much flagship material. It is, however, a slightly reduced flagship, if one may use the term. Unlike the 9 and 9 Pro, the OnePlus 9R is powered by a Qualcomm Snapdragon 870 chip, rather than the Snapdragon 888 which is the current premium flagship favorite. It is a formidable processor, and a step above the much-praised 865+, but let’s face it, it is also a step below the 888.

The next most significant difference between the 9 and the 9R is in the camera department. Although the 9R does have four cameras as compared to the three on the OnePlus 9, the difference is telling – the OnePlus 9 came with a Sony IMX 689 48-megapixel main sensor, a special Sony IMX 766 50-megapixel ultrawide, and a slightly decorative (we suspect) 2-megapixel monochrome sensor. The OnePlus 9R comes with OnePlus’ favorite sensor, the 48-megapixel Sony IMX 586 (such 2019 feels), with a 16-megapixel ultrawide camera, a 5-megapixel macro, and a 2-megapixel monochrome. The feeling of being outgunned is reduced to an extent by the curious fact that the 9R’s main camera has OIS, something the OnePlus 9 lacked. But then again, the OnePlus 9 gets perhaps the most hyped feature of the 9 series – the Hasselblad tie-up, which is supposed to bring much more natural color calibration.

No lags in performance 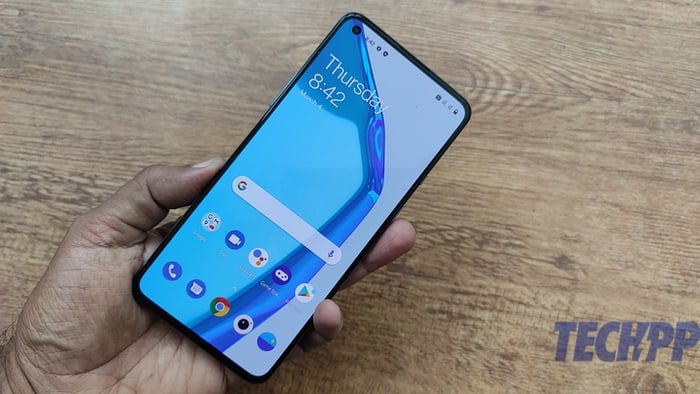 In terms of sheer performance though, there actually is not too much that separates the 9R from the 9. The Snapdragon 870 is a flagship processor and paired with 8 GB/ 128 GB and 12 GB/ 256 GB RAM and storage configurations, it will run most games at maxed-out settings – you can easily play Call of Duty and Asphalt without any lags, and multi-tasking is very smooth too. The phone can at times get a little warm, but never nears alarming levels.

That 6.55-inch Fluid AMOLED display with 120 Hz refresh rate seemed a little less bright than its counterpart on the OnePlus 9 but is great for watching videos and browsing the Web, The stereo speakers are similarly, just a little lower in volume than on the OnePlus 9, but they deliver some super sound. This is a very good phone for those who love to consume multimedia on their handsets. And of course, the Snapdragon 870 comes with support for 5G, making this phone ready for that particular network when it arrives. Mind you, we wish OnePlus would take the fingerprint scanner to the side of the phone – the in-display one looks snazzy but can be erratic, like almost all in-display fingerprint scanners.

Lagging behind in cameras though 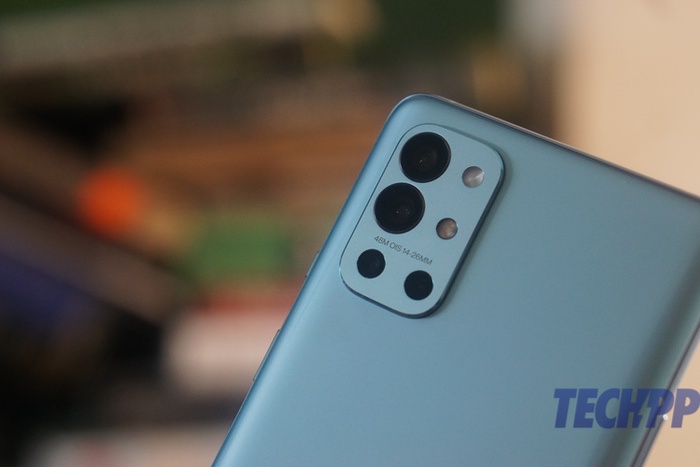 It is in the camera department however that you see the OnePlus 9R slipping a little, not just behind the OnePlus 9, but even other devices in its price bracket. The Sony IMX 586 is a great sensor and takes some very good daytime shots, albeit with just a touch of saturation on them – we are sure many users will not mind that. However, you do not get the sort of detail that the likes of the OnePlus 9 deliver. The difference in performance is very startling in the ultrawide sensor, where the 9R’s 16-megapixel sensor does an adequate job but its results are not in the league of the much more heavily detailed images you get from the 50-megapixel Hasselblad-infused camera on the OnePlus 9. 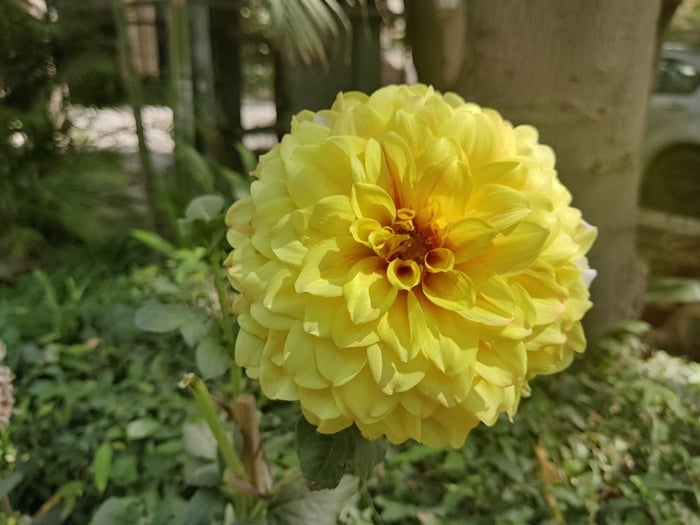 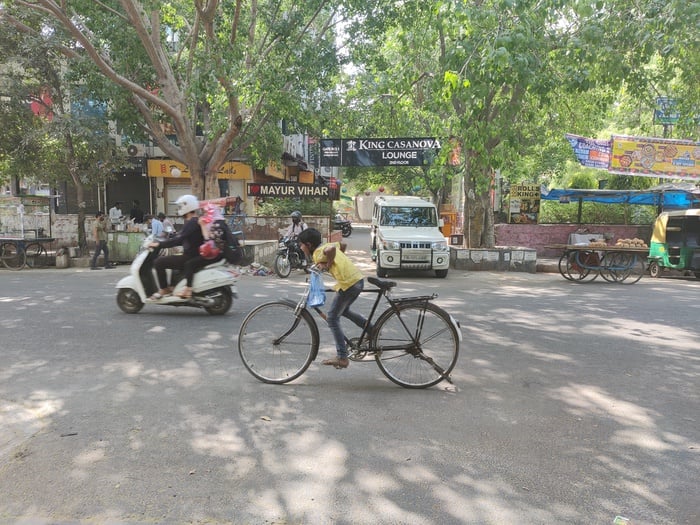 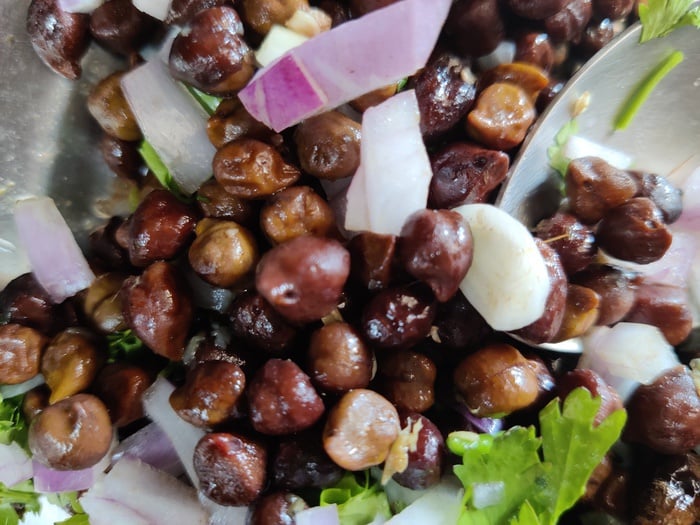 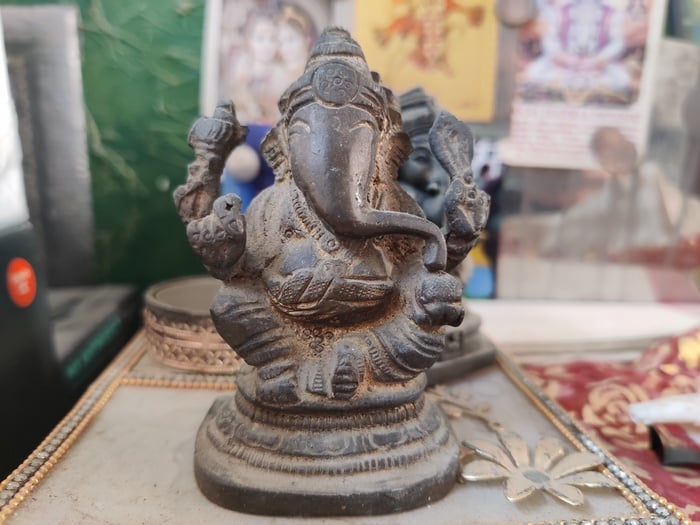 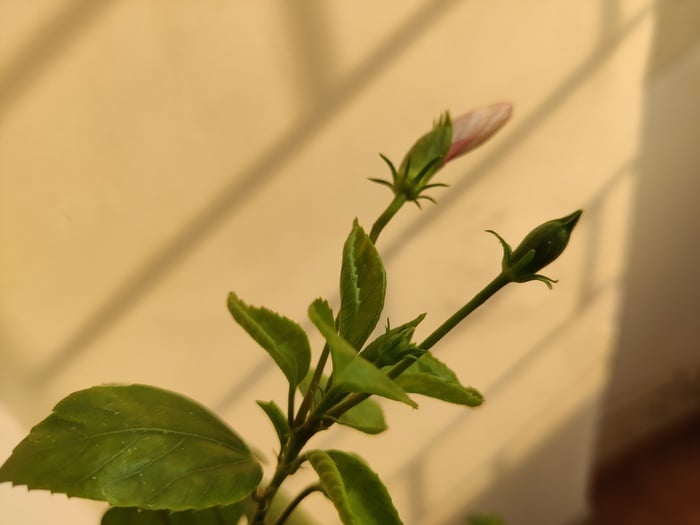 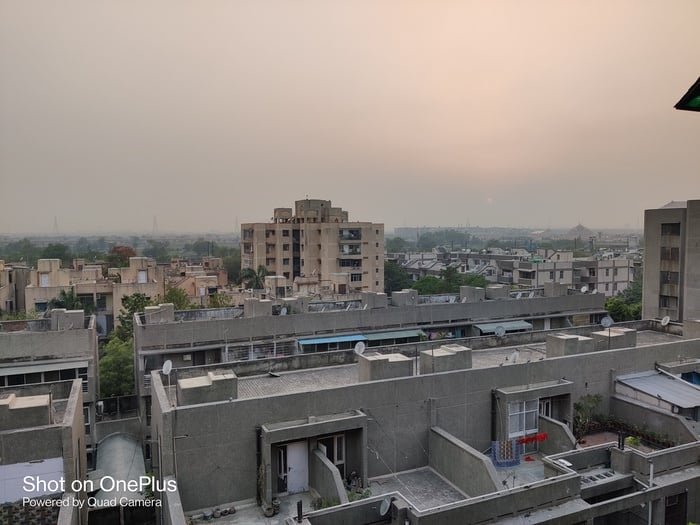 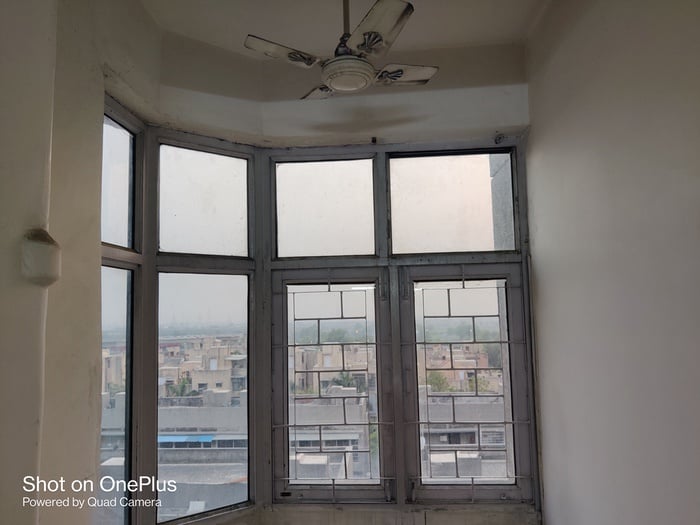 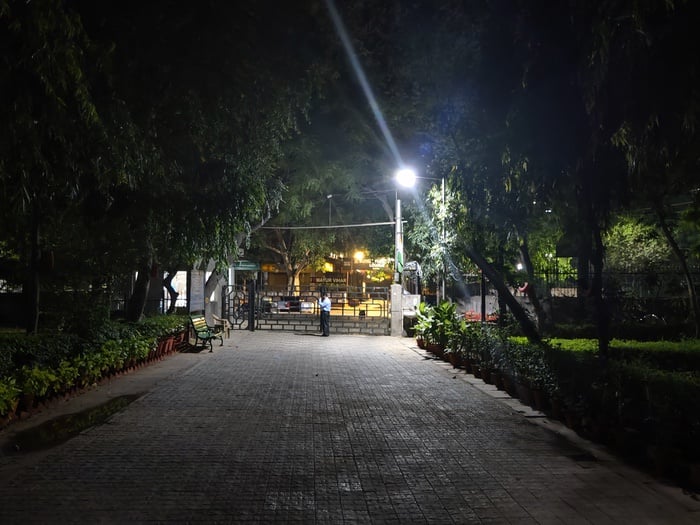 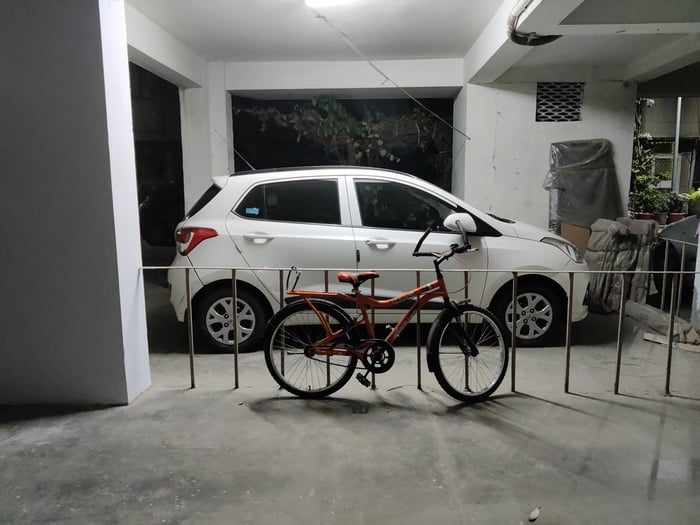 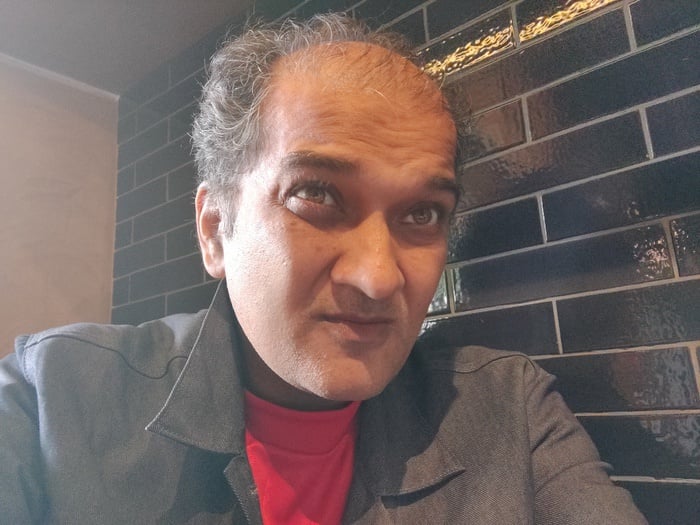 The OIS does not really make a telling difference even in low light shots and videos, and we think the OnePlus 9 actually did both a little better in terms of color and detail. The selfie camera is exactly the same as on the other OnePlus 9 devices and while it too is a bit of a veteran (a 16-megapixel Sony IMX 471), it does a decent job and churns out social media-worthy vanity snaps.

Great battery and the UI has no Oxygen shortage

Finally, there are the two greatest assets of the device – the (relatively) clean Oxygen OS on top of Android 11, and the battery. There have been some allegations about OnePlus getting inspired by Samsung for its UI, but it remains one of the least cluttered and bloatware-free around. And OnePlus keeps fortifying it with regular updates too. This is not a phone for those who love a lot of features in their interfaces, but those who love clean and minimalist UIs will love it. 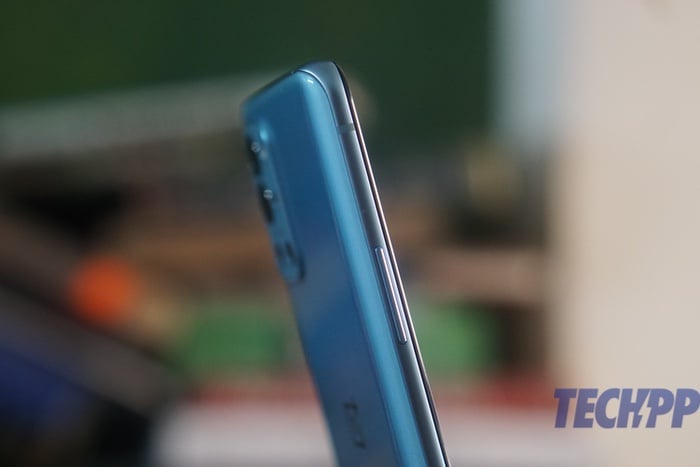 The phone comes with a 4500 mAh battery, similar to the one on the OnePlus 9, and has not just support for 65W Warp Charge, but also a 65W charger in the box. A small point to note here is that the charger actually has a normal USB port rather than a USB Type-C one, as seen on the OnePlus 9 and OnePlus 9 Pro. Battery life is actually a little better than the OnePlus 9 – we got close to a day and a half of usage – and that charger will charge the phone from 0-100 percent in about 45-50 minutes. Which is not bad at all.

Remains the budget OnePlus to go for

So more than a month after it was released, where does the OnePlus 9R stand? Well, in a place that is very similar to where we had seen the OnePlus 7 and 7T. Not crazy cutting edge like its brothers, but doing more than enough to be considered a proper flagship in its own right, even while being blessed with a price that is well below its Pro siblings. Yes, it is a much better performer than the OnePlus 8T, which is no mean one itself. 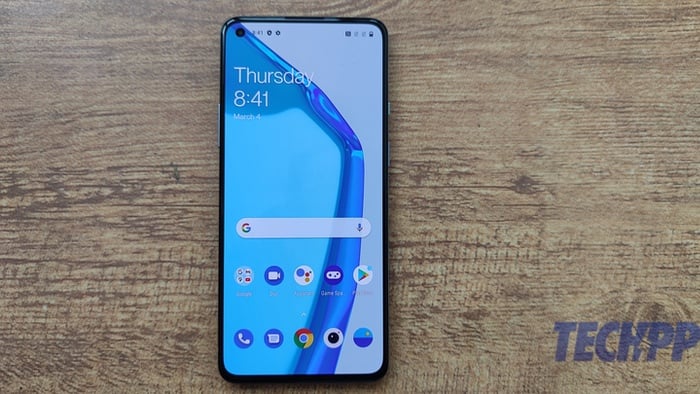 Move it out of the OnePlus range, however, and at Rs 39,999, the OnePlus 9R goes up against some very stiff competition – the most formidable of which is the Mi 11X Pro which runs on a Qualcomm Snapdragon 888 processor and also brings a 108-megapixel camera to the battle. There is also the iQOO 7 Legend which has a more gaming focus but also comes with the Snapdragon 888 chip. Interestingly, both Xiaomi and iQOO also have phones with the Snapdragon 870 at much lower prices, and Vivo’s X60 is in the same price range.

But then, we think that the OnePlus 9R is actually more like the super affordable (relatively speaking) option for those who cannot shell out the sort of bucks the OnePlus 9 and 9 Pro demand than a contender for the title of “best phone below Rs 40,000.” It is for those who want Oxygen OS, the Alert Slider, and the OnePlus premium experience. Without getting too premium in price terms. This is why we get such classic OnePlus feels off it – good specs, good design, not the greatest cameras, superb charging speed, great software…

There are three OnePlus 9 devices in the market today. But the OnePlus 9R is the only OnePlus out there with flagship killing in its genes.

Review Overview
Was this article helpful?
YesNo
TechPP is supported by our audience. We may earn affiliate commissions from buying links on this site.
Read Next
iQOO 11 5G Review: Does It End Your Quest for the Ultimate Smartphone?
#oneplus #oneplus 9r #review