Vivo‘s sister brand iQOO made its debut in India last year with the iQOO 3, And in tech terms, it was a very good debut too. The phone turned in a very good performance and was for a long time, the most affordable device with the Snapdragon 865 chip in it, although it, later on, did take some flak for not providing timely updates. While the brand claims the phone did well, a lot of market analysts felt its progress was hampered by the Corona outbreak last year, shortly after its launch. Well, after a longish sabbatical, the brand is back in India, and this time with the iQOO 7. 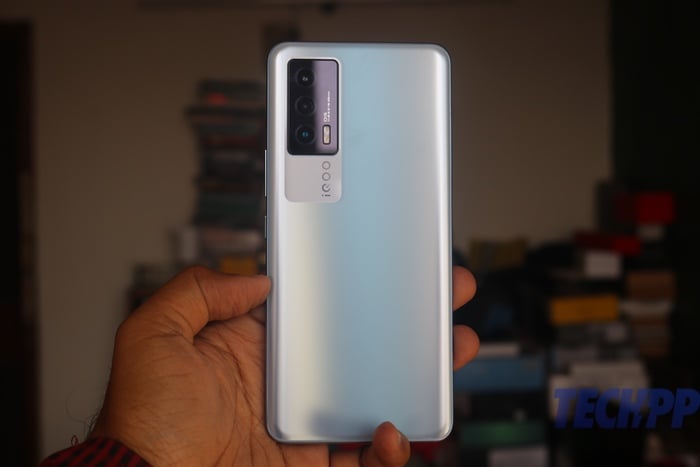 iQOO has positioned the iQOO 7 as mainly a gaming device, just like it had done with the iQOO 3. Well, you could not say so by looking at it. Unlike phones like Asus ROG that scream “gaming” in your face the moment you clap eyes on them, the iQOO 7 has a very mainstream appearance. Make that “a very polished mainstream appearance.” Indeed, we think it borrows a few pages from the design book of its sister brand, Vivo. And that is not a bad thing at all.

The iQOO 7 comes in two shades – Storm Black and Solid Ice Blue. We got the Solid Ice Blue and actually liked the look of it. The front is standard “all about display” territory with a punch hole in the top middle and a fingerprint sensor beneath. Clean enough but nothing surprising. The back, however, follows the Vivo aesthetic that we saw in the very good-looking X60 series – a slightly curved and shiny back that meets the sides, with a rectangular camera unit that just out a little. In a very nice touch, iQoo has also included its brand name vertically below the camera unit in a metallic panel. The blue has a pearly shine and can sometimes give a slightly steely appearance when light falls on it. The shine can dazzle at times but the color itself is subtle.

At 163.34 mm, it is definitely a tall phone and at 196 grams, not exactly feather-light, but the finish is very premium. It also feels solid enough although we would have liked some sort of protection against dust and water. There is a case in the box but this is a phone you might like to show off. Mind you, no one will ever guess it is a gaming phone. 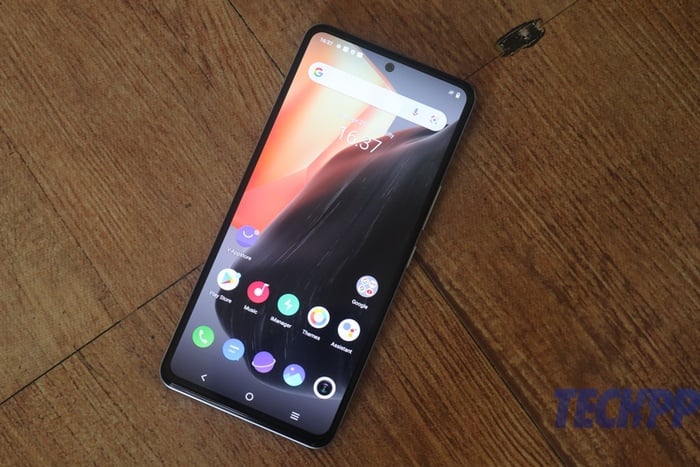 The iQOO 7’s gaming avatar comes to the fore when you see its spec sheet. The brand claims that it is the first phone to come with two processors – one dedicated to performance and another to the display, called an intelligent display chip. The performance chip is the Qualcomm Snapdragon 870, and in combination with the unnamed display processor (which tweaks frame rates and other graphics factors as per the content being viewed), it claims to deliver an excellent viewing experience. The display itself is a 6.62-inch FHD+ AMOLED display with HDR 10+ certification and a maximum brightness of 1300 nits. Pretty impressive on paper, we have to concede although, at first glance, the display did not have the sort of popping colors we saw on the Vivo X60. Perhaps it is just a matter of the wallpaper or maybe that display processor is just settling down. 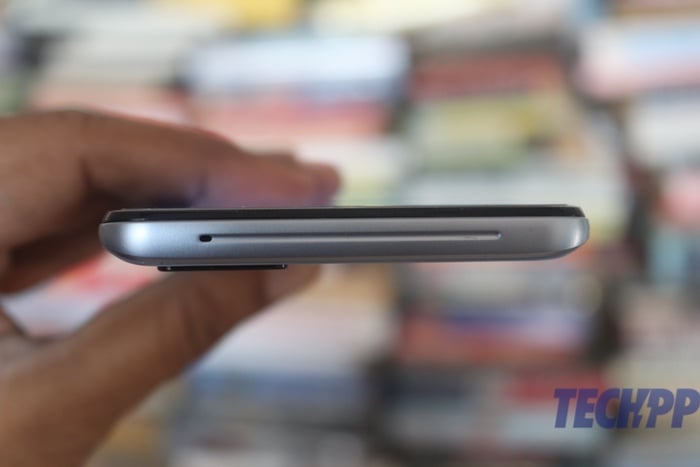 There is RAM and storage aplenty with 8 GB/ 128 GB. 8 GB/ 256 GB and 12 GB/ 256 GB variants. The phone comes with Extended RAM function which allows a further 3GB RAM to be added to the existing RAM from the storage, There is no expandable memory though, but there are stereo speakers and support for surround sound (no headphone jack, alas), which should add to the whole multimedia experience. And keeping things cool is a liquid cooling system and a graphene layer. This phone is clearly designed to handle heavy-duty work. 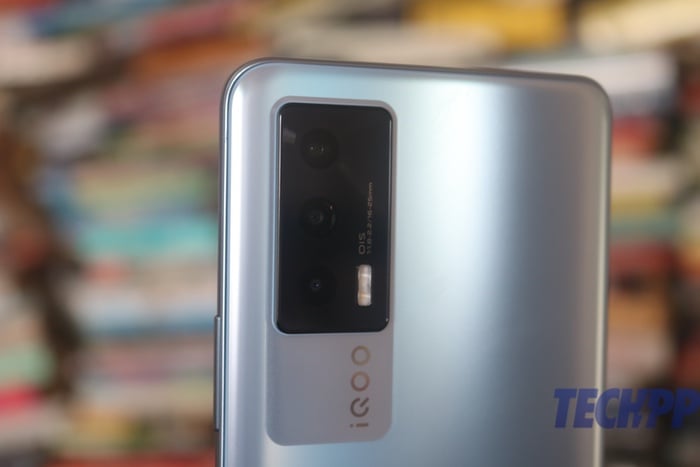 It loses out on some megapixels in the camera segment, with a triple camera arrangement on the back led by a 48-megapixel Sony IMX 598 sensor with OIS. Accompanying it are a 13-megapixel wide-angle camera which can also double up as a macro camera and a 2-megapixel monochrome camera. The selfies are handled by a 16-megapixel snapper in that notch in the display. If that sounds relatively routine, then the battery has a surprise. While the 4400 mAh battery might not sound impressively big, the 66W charger that comes with it certainly does. It claims to recharge the phone from zero to full in about half an hour, making it one of the fastest charging phones out there. Add to this Bluetooth, Wi-Fi, and 5G connectivity and you have specs that are a highly upgraded variation of what we saw in the iQOO 3 – formidable and designed for gaming inside a mainstream exterior.

And a very iQOO price too 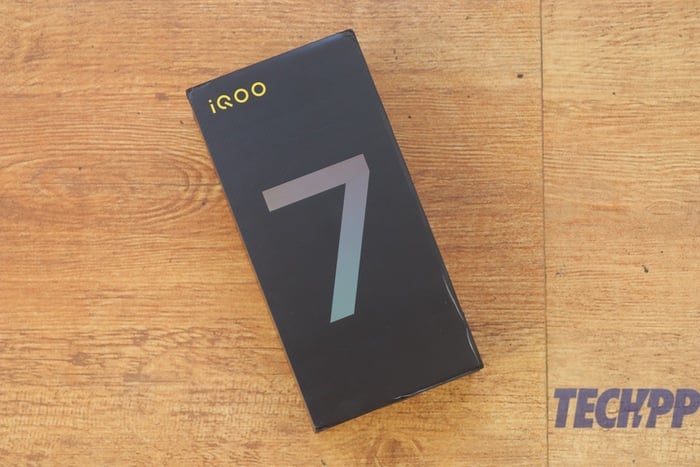 The pricing is very iQOO too. The brand is making a name for itself as a provider of great hardware at surprising prices. And it delivers with the iQOO 7 as well. At its price of Rs 31,990 for 8 GB/ 128 GB, Rs 33,990 for 8 GB/ 256 GB and Rs 35,990 for 12 GB/ 256 GB, the iQOO 7 offers excellent value for money on paper. It falls right between the recently launched Mi 11X (Rs 29,999) and the Vivo X60 (Rs 37,990), both of which sport the Qualcomm Snapdragon 870 chip. It is also more affordable than the OnePlus 9R which starts at Rs 39,999. On paper, this has the potential to be one of the best gaming-oriented smartphones out there, doing for the Rs 30,000 segment wat the Poco X3 Pro is doing for Rs 20,000 one, It might find the “gaming phone” label more of a millstone around its neck than an asset, but it definitely has what it takes to make a big splash in the Indian market. Just how well it performs, gaming, and otherwise will be revealed in our detailed review. Stay tuned.

Was this article helpful?
YesNo
TechPP is supported by our audience. We may earn affiliate commissions from buying links on this site.
Read Next
iQOO 11 5G Review: Does It End Your Quest for the Ultimate Smartphone?
#First Cut #First Impressions #iQoo #iqoo 7 #snapdragon 870