They had made their debut in India a few years ago but then kept a low profile. However, with the pandemic restricting many of us to our homes, Chromebooks seem tone making a comeback into our digital lives. And that is because Chromebooks and simple computing go hand in hand. If you are not playing high-end games, editing heavy videos, and are not putting those endless gigs of RAM and heavy-duty processors to use (and most of us are not), you might as well save yourself some money and buy yourself a simple Chromebook. They are generally lightweight, work fast, and, best of all, do not cost too much. 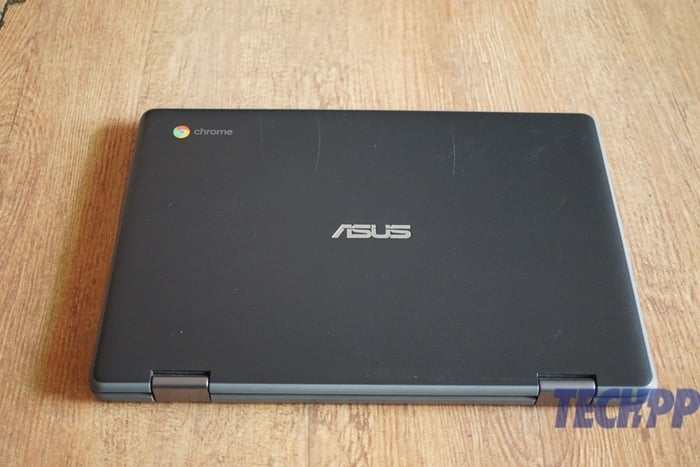 This is perhaps why Chromebooks are so often associated with students. And with schools and colleges going online(thanks to the pandemic), suddenly, the number of people requiring a notebook has gone up. And of course, while the idea of buying a high-end, powerful laptop might sound tempting, if all you have to do is attend online classes, do some research, do project work and handle emails on a laptop, a Chromebook might be able to serve you just as well without really burning a deep hole in your parents’ pockets. And one of the Chromebooks that will come into contention for any student seeking a notebook will be the recently launched Asus Chromebook Flip C214, part of Asus’ new range of Chromebooks.

The Asus Chromebook Flip C214 comes with no frills. Unlike the original Chromebook Flip, which had a metallic build, the Flip C214 notebook looks as basic as it gets. But that is not a bad thing. Asus has covered all the design basics that actually make the device a not-so-basic package.

Confused? Well, let us spell it out for you.

The first looks of the Asus Chromebook Flip C214 suggest that the notebook is no different from your next-door Chromebook. However, a closer look will reveal the build quality of the device that helps it stand out. When we think of budget notebooks, one does not expect the greatest build quality. That is not at all the case with the Asus Flip C214. Asus has designed it to go through your daily drops and beatings. 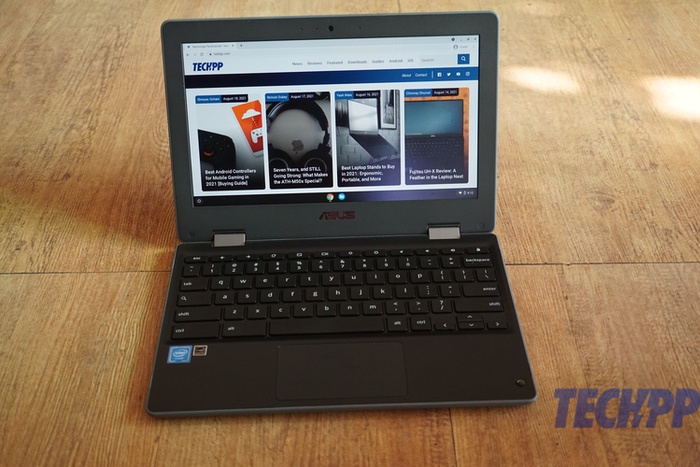 Even though it is all plastic built, Asus has put in some elegant touches that help make the device a marathon runner rather than a sprinter. The notebook comes with textured plastic that makes the Chromebook very grippable. The device also has rubber bumpers all around the edges that aim to minimize damage if and when you accidentally drop the notebook – it is designed to take a drop from up to four feet. The notebook comes with MIL-STD 810G military-grade durability (it can bear up to 30 kg pressure on its lid), and its keyboard is spill-resistant. We would have liked some scratch resistance – the unit we received had a few scratches on the lid that simply refused to go. All said and done, it might look like a relatively mainstream notebook, but the Flip C214 actually has much more to offer in design terms.

Built to last, built to be used anywhere

Along with being rugged, the Asus Flip C214 is also quite portable. It comes with an 11.6-inch anti-glare touchscreen display and weighs only 1.2 kilograms. And yes, as the Flip name indicates, the notebook comes with a 360 versatile flip hinge, and because it has a touch screen, flipping it all the way to 360 degrees will allow you to use it as a tablet with the keyboard tucked behind. The form factor and weight of the Chromebook Flip C214 make it ideal for being carried around and worked on just about anywhere. 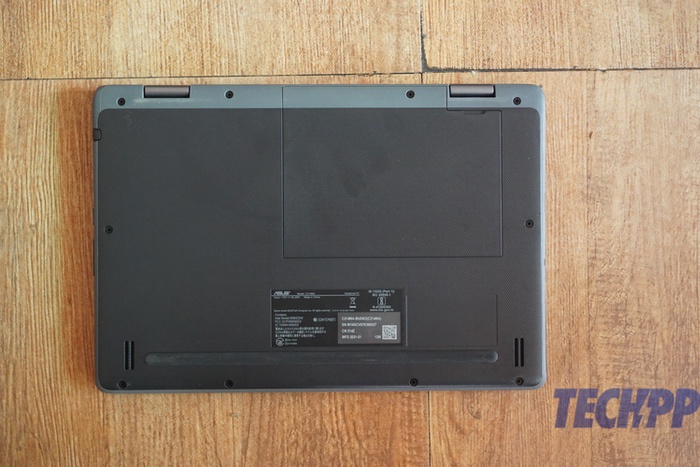 You can throw it into a bag, carry it around, place it on a desk, lounge on the bed or sofa, and still use it comfortably. It is rugged, tough, portable, and functional, all of which we think make for a great design, as opposed to just good looks.

In a day and age where laptops and notebooks are getting slimmer and less port-friendly, Asus has been quite inclusive when it comes to ports. The Chromebook Flip C214 brings a USB Type C port, an SD card slot for up to 2 TB expandable memory, a 3.5 mm audio jack, a USB Type-A port on the left side, while the right side houses another Type C port, a Kingston lock slot, a power/lock button, and a volume rocker. 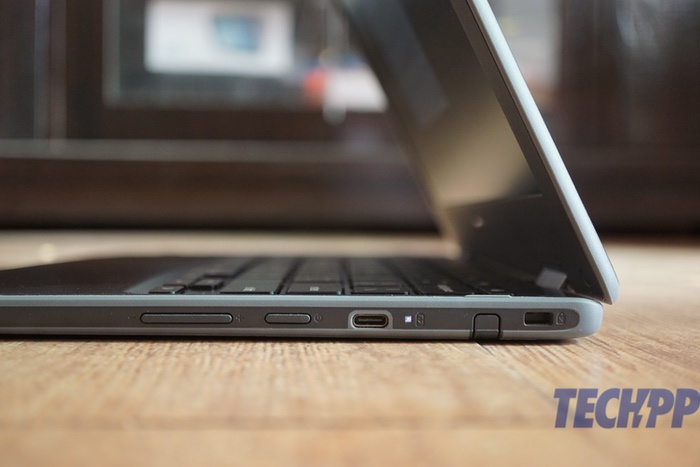 The Chromebook Flip C214 also brings dual stereo speakers placed on the base and dual cameras, one of which is placed right above the display, and the other is placed on the bottom right side of the keyboard. There is Asus branding on the top of the notebook and under the display as well.

Notebook displays these days are getting slimmer and bigger in size and with smaller bezels and higher resolutions. This is why the display of the Chromebook Flip C214 seems right out of a bygone era. The 11.6-inch HD display has a resolution of 1366 x 786 px resolution, which is a bit of a disappointment. It has a low resolution which would bother those who have to use it, as the lower resolution does jump out at you. The thicker bezels around the display also do not really speak a very modern language. 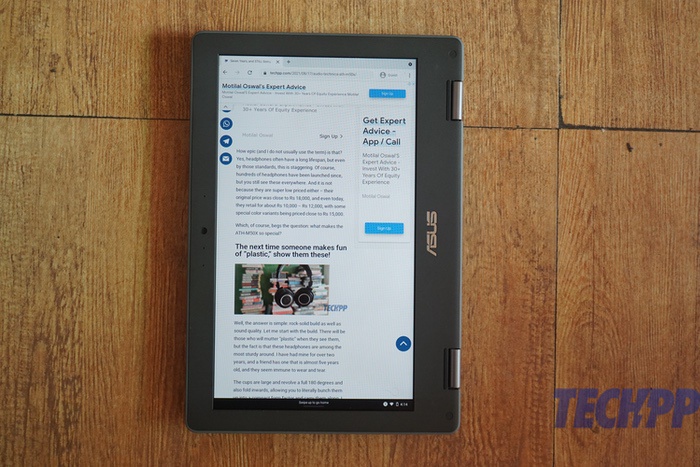 On the flip side (pun so thoroughly intended), the display of the Flip C214 is very responsive, which makes it very usable as a touchscreen. It would help if you were a tad careful while touching it to keep it from getting scratches and smudges, but other than that, it is quite bright and can be used outdoors comfortably. It can be tilted at different angles, which is a huge bonus and makes it a great device to consume content on, too, even though the resolution is low.

The Asus Chromebook Flip C214 is powered by an Intel Celeron N4020 dual-core processor, which is paired with 4 GB RAM and 64 GB onboard storage. You can expand the storage up to 2 TB on the device by using a microSD card. Now that processor and that RAM might not sound very impressive to those using “normal” notebooks (running Windows or macOS), but those are more than ample for Chrome OS. In straightforward terms, Chrome OS is based on Google’s Chrome browser and has very low system requirements, unlike Windows and macOS. And while, unlike the past, Chromebooks can now work without an Internet connection, too, a lot of their work is done online (“off the cloud,” as they like to say). You can now also access the Google Play Store and download Android apps that you can use on the Chromebook. 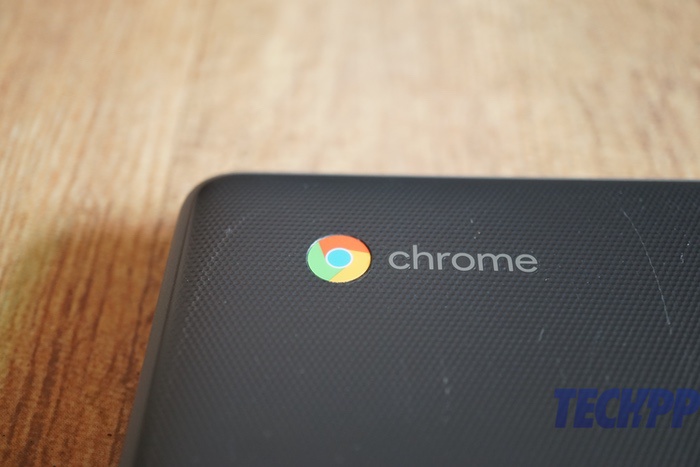 In simpler terms, you can think of Chromebook as laptop-cum-phone that allows you to download apps and work on programs mainly online. You also get seamless sync between Android devices and ChromeOS which means you can connect your Android phone to the device, and the same apps will get installed on the Chromebook. The Clip C214 is particularly handy for Android apps as it has a touchscreen, which Android apps are designed for.

If you are looking for a device to help you with your daily online chores, like browsing the Web, checking social networks, research, emailing, watching videos and basic word-processing, and even the odd spot of spreadsheet usage, the Asus Chromebook Flip C214 will not disappoint you. You can easily browse multiple sites, work on documents and spreadsheets (we recommend Google Docs), and keep tabs on emails and social networks without really getting stuck. The Chromebook can work offline, but it works best with an Internet connection (a SIM card in the notebook would have been handy, although Wi-Fi and Bluetooth connectivity do let you latch on to an Internet connection). 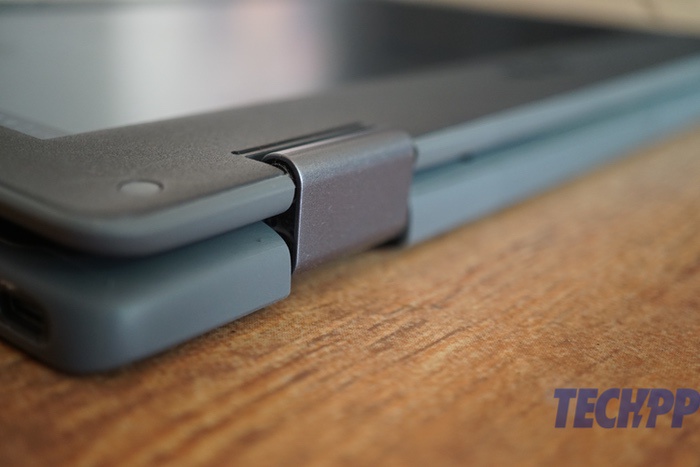 Yes, you can download and run Android apps on the device, but honestly, we found the experience to be a very mixed one and, unless pushed to the Play Store, stuck to doing most of our work through classic Chrome apps – mostly the browser and a lot of Google Docs. It is a combination that should suffice for many users. A note of warning – while you can edit video on this device, be ready for the performance to take a hit and options to be limited. As for heavy-duty games (Call of Duty, Asphalt, et al.), we would suggest giving them a miss, although casual ones work just fine.

The keyboard of the Flip C214 is very good and tailor-made for long typing sessions. The keys have a good feel and offer 1.5 mm key travel. The only problem we found with the keyboard was the fact that the plastic area around the keyboard seemed to sink a little when we pressed the keys, which did not feel too reassuring and contrasted oddly with the toughness of the rest of the notebook. The trackpad on the Flip C214 is impressive, too, as it responds to commands very well and registers clicks quite swiftly. Mind you, with that touchscreen, we often simply opted to tap the display. We did not find ourselves using the tablet mode that often because, as a tablet, the Flip C214 does tend to become a little heavy (it weighs more than twice as much as an iPad). 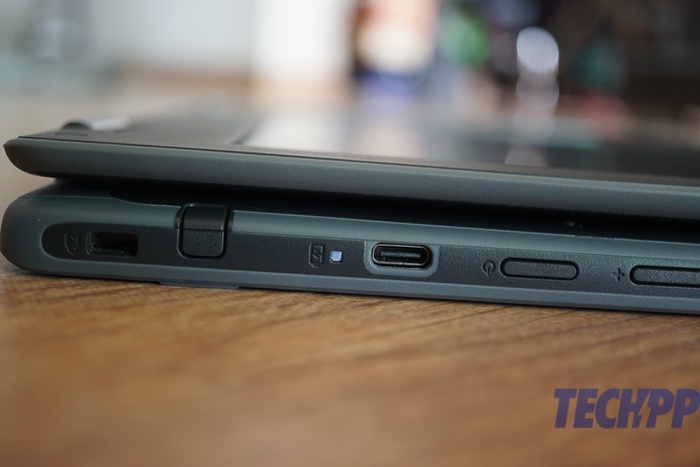 The dual stereo speakers on the device offer audio output that is loud and clear and add not just to the content viewing experience but are handy for Zoom sessions as well. The cameras could have been better, though. The HD camera above the display is substandard, while the secondary 5-megapixel camera below the keyboard, which can be used when the notebook is in stand mode, is just average.

Asus claims that the Chromebook Flip C214 can last for about 11 hours on a single charge, which we found to be more or less true. It comes with a 50 Wh battery which, thanks to the small screen size and low resolution, can easily go past a day of normal usage. Another major plus point of the Asus Chromebook Flip 214 is that it comes with a USB Type-C port which means you can charge the notebook with a smartphone charger as well, provided it is powerful enough (there is a 45W charger with a brick in the box). 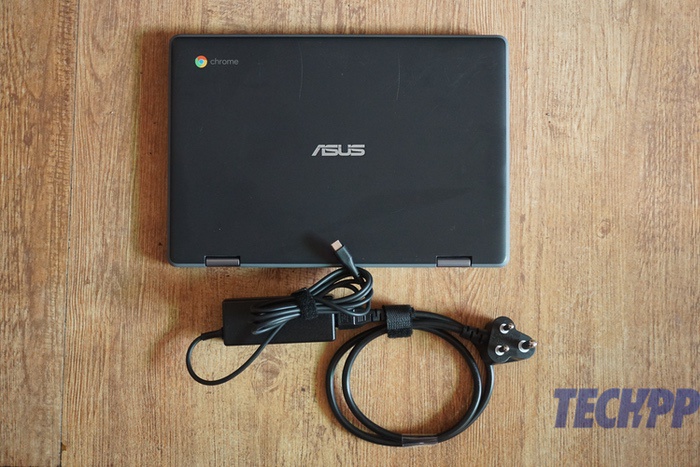 With a price tag of Rs. 23,999, the Asus Chromebook Flip C214 is the perfect computing partner for those looking for an everyday, light workload-oriented notebook. Its combination of touch and type makes it a very good option for students who need to catch up on school and even college work online. There are alternatives available, most notably the HP Chromebook 11a, which is available at Rs 22,900 but has no touchscreen. The Lenovo Chromebook Duet, which brings a detachable keyboard and full HD display the battle at Rs 24,999.

The Asus C423 and C523 Chromebooks are also priced in the same vicinity and come with a sleeker design but are less rugged and portable as they have larger displays. All in all, its rugged design, its touchscreen, and the option to revolve 360 degrees put the Asus Chromebook Flip C214 in a special zone of its own for the moment. If you are a student on a tight budget, this is one Chromebook worth flipping for. It is one of the few even if you flip it in the air (not too high, though!).

Review Overview
Was this article helpful?
YesNo
TechPP is supported by our audience. We may earn affiliate commissions from buying links on this site.
Read Next
iQOO 11 5G Review: Does It End Your Quest for the Ultimate Smartphone?
#Asus #Asus Chromebook Flip C214 #Chromebook #review