It was the device that started and then revived the tablet revolution. And while it might have got a new Pro, Air, and mini siblings, the iPad still remains THE device for many of us wanting to dip our toes in tablet waters. Apple has released the 9th generation of the iconic suffix-less iPad and while it is the most affordable new iPad out there by some distance, does it still have the old magic, or is its price its only redeeming feature? 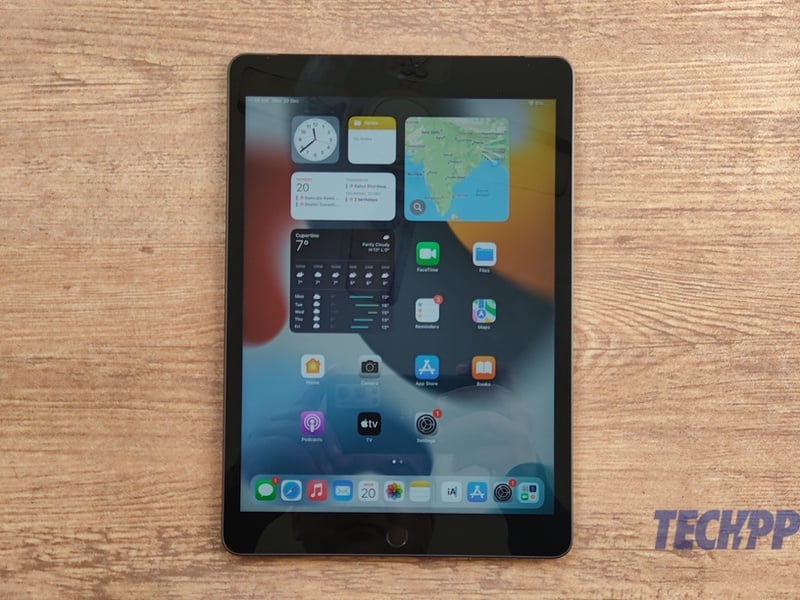 Those traditional golden oldie looks (minus a gold shade, though)

The latest iPad seems to be a bit of a blast from a very golden past in terms of design. Yes, the display at 10.2 inches is slightly larger than the 9.7-inch one on the first seven generations of the iPad, and the bezels are more narrow, but this is a chip off the classic iPad design block, with curving sides and a home button which also serves as a fingerprint scanner, below the display. In addition, it is the only new iPad to come with a lightning port, with all the others having moved to the USB Type C port. It also is the only new iOS device to come with a 3.5 mm audio jack.

In terms of size, it is EXACTLY the same as its predecessor, the iPad (8th generation) launched in 2019 – 250.6 mm long, 174.1 mm wide, and an impressive 7.5 mm thin – and weighs almost the same (498 grams, which is a little more than the 495 grams of the previous iPad). It still has that solid, reassuring feel that is so typically iPad. However, in terms of colors, this golden oldie does not have a gold variant – you only have silver and space grey.

We got the space grey variant. It did not turn heads in awe and surprise. But many were the knowing glance it attracted. A glance that said, “Ah, an iPad.” The iPad (9th generation) is pretty much like the guy or girl next door – nothing dazzling but familiar and ever so comforting. There is a lot to be said for that. 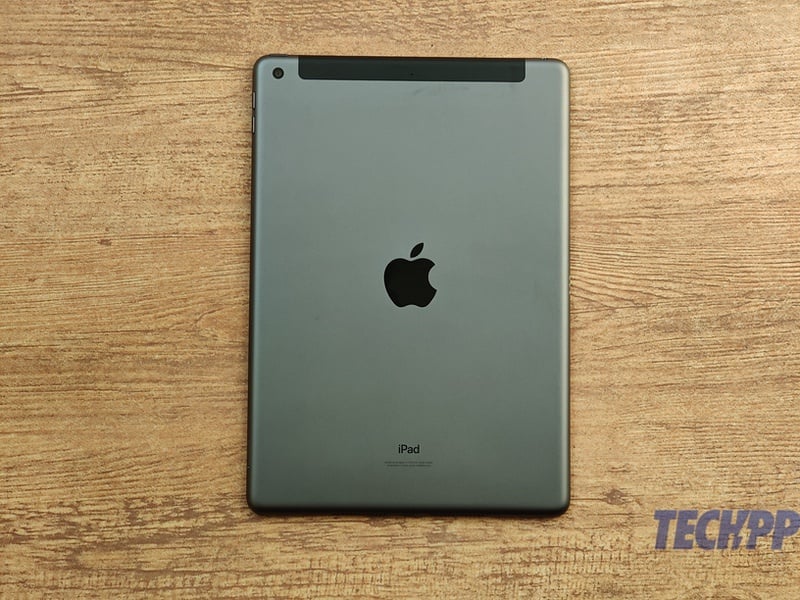 ‘Familiar and comforting’ also best describes the performance of the iPad (9th generation). In terms of specs, it is very broadly similar to the iPad (8th generation), with a similar 10.2-inch retina display with a 2160 x 1620 resolution and 500 nits of brightness, although this one is labeled a True Tone display, unlike its predecessor’s.

At its core is the same iPadOS 15 that is seen on the other iPads, with ever-improving support for accessories, notebook-like functionality, and multi-tasking.

There are three significant improvements over the previous iPad – the processor is bumped up to an A13 Bionic from A12 Bionic, the front camera is now a 12-megapixel ultrawide (the rear camera remains an 8 megapixel one, making this perhaps the first Apple device with a more powerful front camera than a rear one), and the storage has been increased to 64 GB and 256 GB, from 32 GB and 128 GB in the past. The fact that these improvements (particularly the storage) have come without a significant price increase is something that Apple deserves a round of applause for. 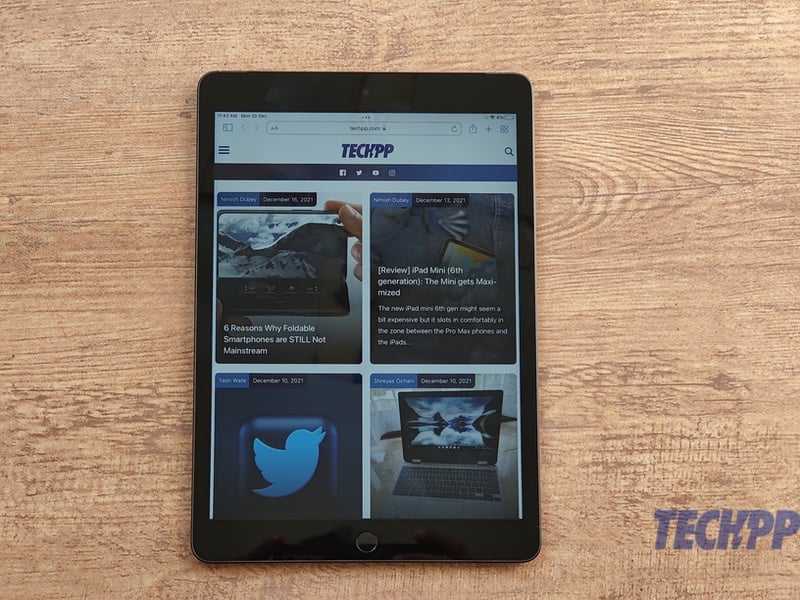 The spec boost does not really hit you in regular tasks like browsing the Web, social networking, mail, and even word processing or watching videos. However, we did find that high-end games like Call of Duty and the Asphalt series play a tad more smoothly than on the previous iPad, although not as well as on the new iPad mini (which has an A15 Bionic processor).

Similarly, editing videos and RAW images are also better than on the iPad (8th generation) but again, not as smooth as on the Pro range or the new mini, or even the new Air. But the point to be noted is that the iPad (9th generation) is priced a lot lower than those worthies. Interestingly, we found that the home button and fingerprint sensor, which some might find an eyesore, was a whole lot easier to use than using the power/display button for the same purpose on the latest iPad Air and iPad mini. 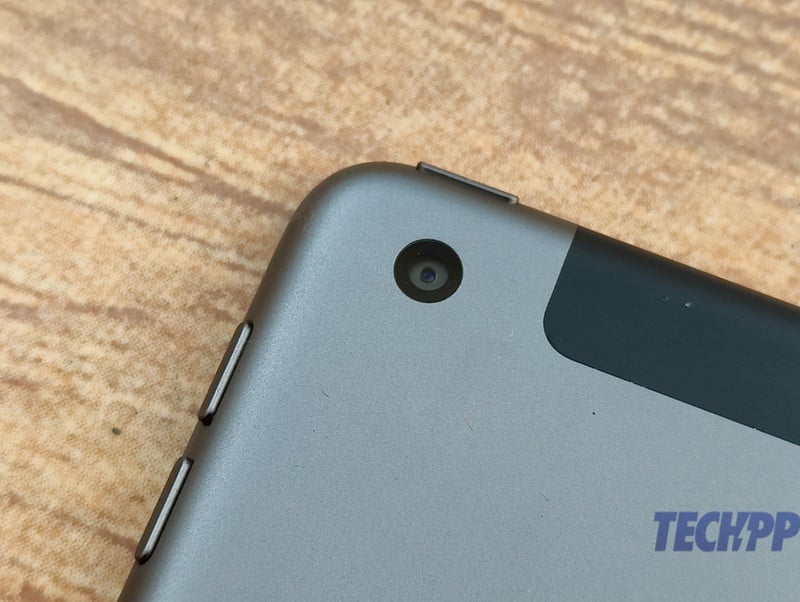 The front-facing camera is one area where the new iPad rubs shoulders with its more powerful siblings. The iPad (9th generation) moves up from the very basic FaceTime camera on its predecessor and gets a 12-megapixel ultra-wide front camera similar to the one on the new iPad mini. It also comes with Centre Stage, where the focus can shift to accommodate more people or move around as you move. We think it is one of the best selfie cameras we have seen on a tablet and is the only really usable camera on it – the rear 8.0-megapixel snapper is best for scans and the like but not for photography or videos, unless the light happens to be really good and you do not have your smartphone handy.

There is also support for the Apple Pencil (1st generation) for those who would like to sketch and scribble, and for Apple’s smart keyboard for the type who likes to type. Pun intended. All this topped off with very good sound from its dual speakers and superb ten to twelve-hour battery life that Apple has made a standard feature of the iPad.

Still a terrific deal, and not just for the tablet takers (that’s traditional too) 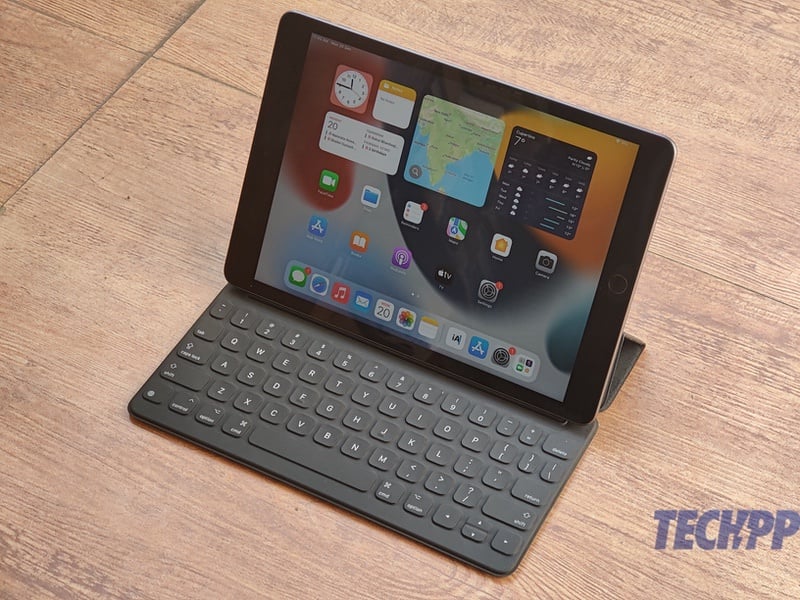 With both the better-specced iPad mini (6th generation) and the iPad Air (4th generation) being available at some outlets in the vicinity of Rs 45,000, we are not very sure that we would recommend the more expensive configurations of the iPad (9th generation) – a 128GB variant at Rs 37,900 would have been interesting, but alas, it does not exist. However, at its starting price of Rs 30,900, there is no doubt that it remains a terrific deal and the best option by some distance for those looking for a tablet with no performance compromises.

In fact, at that price, the iPad (9th generation) is not just comfortably ahead of the Android tablets in its segment, but pair with a Bluetooth keyboard (Apple’s own Smart Keyboard would be best, but is a little pricey at Rs 13,500) and it even challenges Chromebooks and Windows notebooks at its price point.

We know some will insist that an iPad cannot replace a notebook, but then we have been using iPads in that role for almost half a decade now! It might take some getting used to, but it more than suffices for lots of writing, research, and quite a lot of content consumption and gaming. And while a few tasks (like handling WordPress and coding) seem easier on a notebook, the iPad has a few aces tucked up its own sleeve. For example, one cannot really imagine editing videos in detail or playing Call of Duty without too many problems on a Chromebook or a Windows machine at this price point. Neither is it easy to get the kind of display, front camera (huge important now, thanks to COVID), sound, security and updates (iPadOS, duh!), and battery life that the iPad brings to the table from a notebook at the same price.

And if that does not tell you how good the latest iPad is, nothing will. It’s perhaps the last chip off the classic iPad block, but it still packs quite a punch.

Review Overview
Was this article helpful?
YesNo
TechPP is supported by our audience. We may earn affiliate commissions from buying links on this site.
Read Next
Nothing Phone (1) Review: Nothing like Anything Out There
#apple #ipad #iPad 9 #ipados 15 #review