The past year and a half has seen Xiaomi step out of its comfort zone of mid-segment and affordable smartphones and venture into more expensive smartphone waters. And it has done so with a reasonable amount of success – the brand claims to have about a ten percent share of the premium phone market.

It has now added the Xiaomi 11T Pro to its higher-priced lineup. The phone is being projected as a rival to the OnePlus 9RT. That’s quite a task. How well can it handle it? Let’s find out in our Xiaomi 11T Pro review. 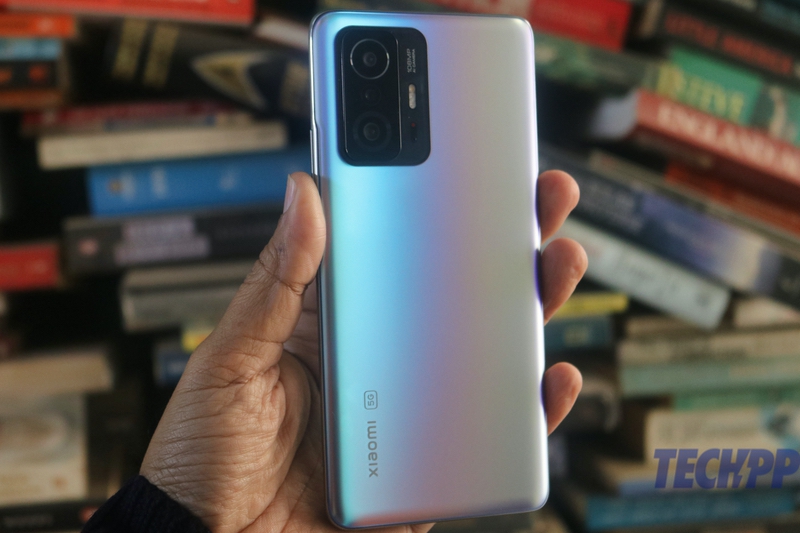 Chipping in with a Snapdragon 888 and a 10-bit display

The Xiaomi 11T Pro comes with all the muscles that you would expect from a flagship-level device. It is powered by the Qualcomm Snapdragon 888 processor, which remains the most powerful chip on the Android side in the Indian market. This is backed up by speedy LPDDR5 RAM and UFS 3.1 storage and plenty of it – the phone comes in RAM and storage variants of 8 GB/128 GB, 8 GB/256 GB, and 12 GB/256 GB, although there is no expandable memory.

The phone has a large 6.67-inch full HD+ AMOLED display. It features what Xiaomi calls a 10-bit TrueColor panel which is supposed to handle colors significantly better than conventional 8-bit displays and also has a peak brightness of 1000 nits. In addition, it has a refresh rate of 120 Hz, a touch sampling rate of 480 Hz, and comes with Dolby Vision certification and support for HDR 10+. There are also stereo speakers, and they have been tuned by Harman Kordon, something we had seen earlier on the very premium Mi 11 Ultra.

Packed with megapixels and charging power

The camera department is similarly well-equipped. The phone comes with a triple camera arrangement at the back – with a 108-megapixel main, an 8-megapixel ultrawide, and a 5-megapixel macro sensor. A 16-megapixel camera handles selfies. There is support for 13 5G bands, and you also have the infra-red port that is now almost a Xiaomi staple. There is a big 5000 mAh battery, and it comes with support for Xiaomi’s 120W HyperCharge as well as a 120W charger in the box. 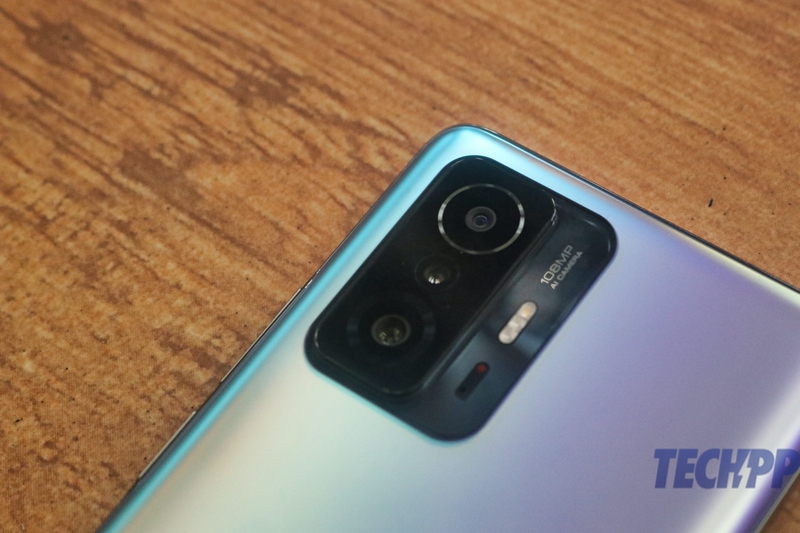 There is no 3.5 mm audio jack, though, and there is no OIS on any of the cameras. Some users also might have preferred an in-display fingerprint scanner, but we think the one on the side (on the power/display button) is more convenient, accurate, and fast. These relatively minor quibbles aside, the Xiaomi 11T Pro ticks pretty much every flagship spec that most consumers would want.

A rather familiar (read ‘old-ish’) design and software

All this is housed inside a design that is a little dated and frankly is very similar to the Mi 11X Pro that we saw last year. We got the Celestial Blue edition, which is a silver-ish shade but changes colors depending on the angle of the light falling on it. That makes it striking, but that apart, the phone’s design is somewhat predictable. The slightly curved back, the rectangular and layered camera unit (with the cameras on a slightly higher level than the flash), the tall front, the metallic colored frame, and the fingerprint scanner on the side are all routine. 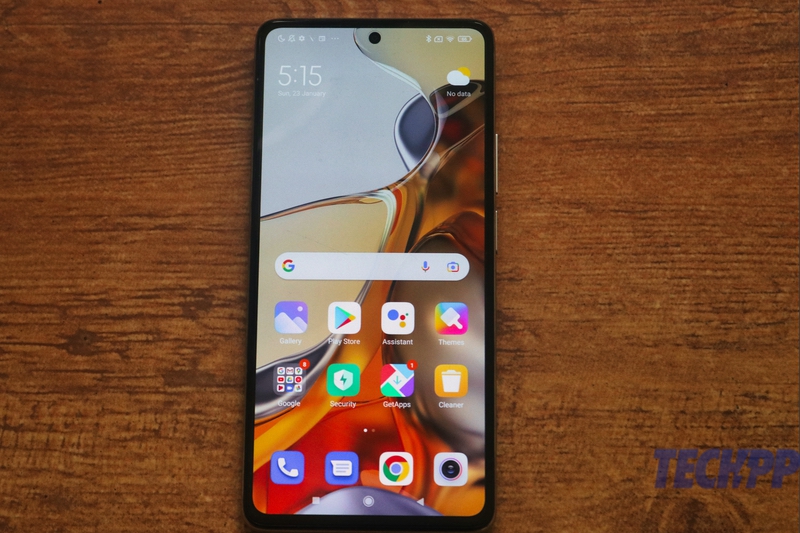 We are not saying that is a bad thing or that the Xiaomi 11T Pro looks bad. On the contrary, it is a very smart-looking phone, but it does not quite stand out from the crowd or seem premium. In fact, the lower-priced Xiaomi 11i looks far more premium with its flat sides and new colors.

The software is another area where the Xiaomi 11T Pro is a disappointment. The phone runs on MIUI 12.5 on top of Android 11. We have no problems with MIUI as it has been cleaned up on the ad and bloatware front and is one of the more consumer-friendly UIs out there. That said, it seems odd to see a high-end device being launched on an older version of Android, especially with the likes of Samsung and Vivo releasing devices with Android 12 out of the box. Xiaomi says both Android 12 and MIUI 13 will soon come to the Xiaomi 11T Pro and has also committed to three years of software updates and four years of security updates. That’s a welcome move, but we just wish the phone had started its journey with Android 12 on it. 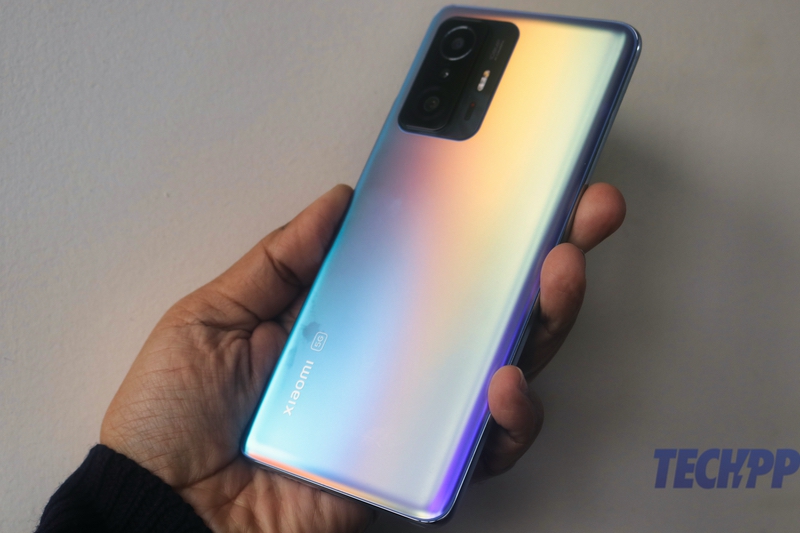 All that spec goodness translates into superb performance. The combination of a powerful processor, great speakers, and a wonderfully bright and colorful display makes the Xiaomi 11T Pro a terrific device for gaming and viewing content. It will run everything from Call of Duty to the Asphalt series without any glitches and will make watching your favorite shows and videos a visual treat. We did not really sense the difference a 10-bit display makes, but there is no doubting that the phone sports one of the best displays in its segment.

It also has one of the best sets of stereo speakers we have seen on a phone at this price point and even above it, with impressive volume and clarity. But, of course, that powerful processor and lots of RAM also mean that the Xiaomi 11T Pro handles multi-tasking and runs multiple apps like a boss, with MIUI 12.5 running smoothly all along. Yes, the phone seems a little heavy at times, but then the speed, sight, and sound more than compensate for those extra grams.

The Xiaomi 11T Pro cameras are capable of delivering good results, and Xiaomi has packed a number of effects and editing options in the software to let you do more with them. The primary sensor takes excellent pictures in good light conditions and also serves up some superb video, with lots of detail, although the colors at times seem a little muted. But when the lights start to fade, so does its performance. 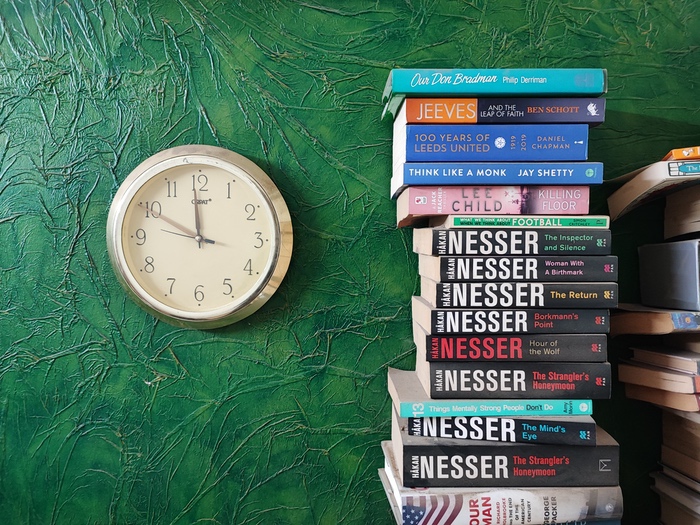 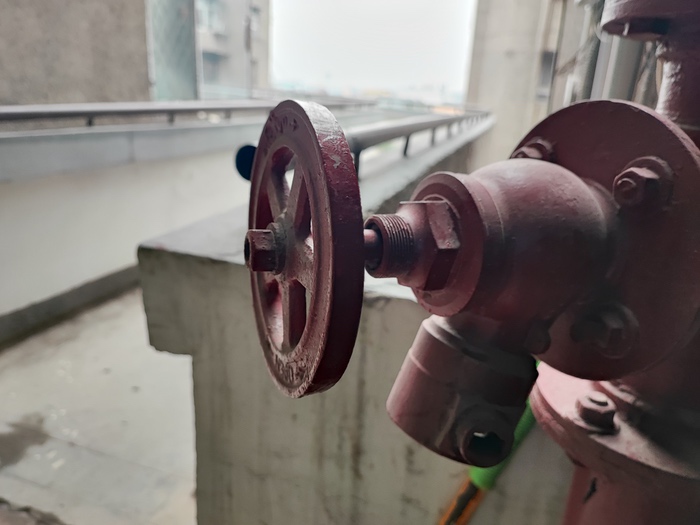 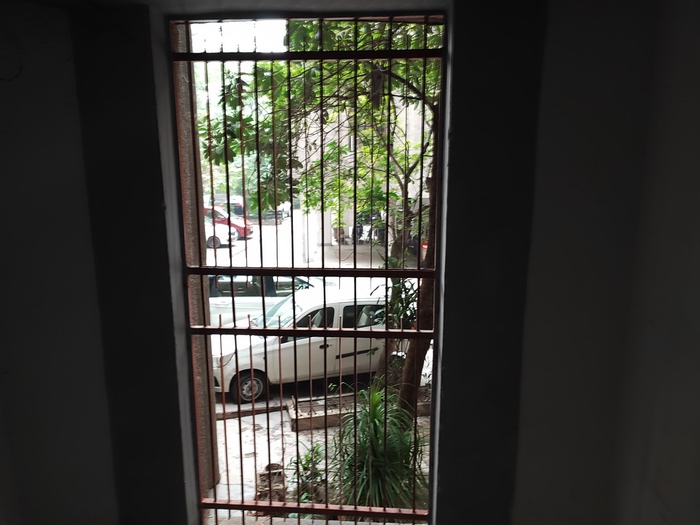 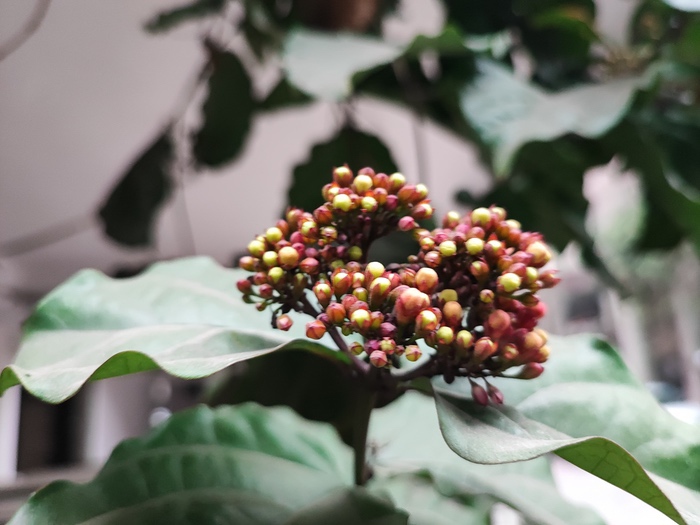 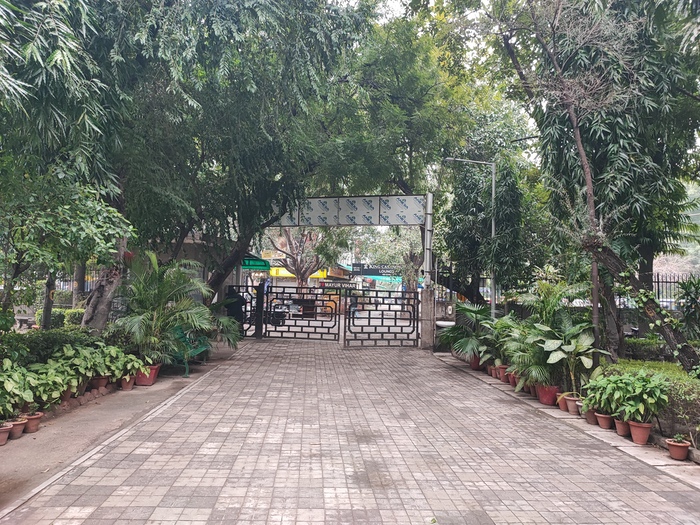 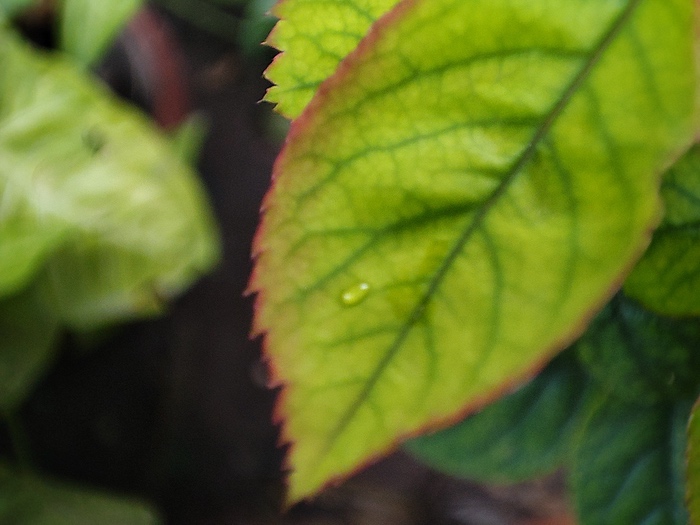 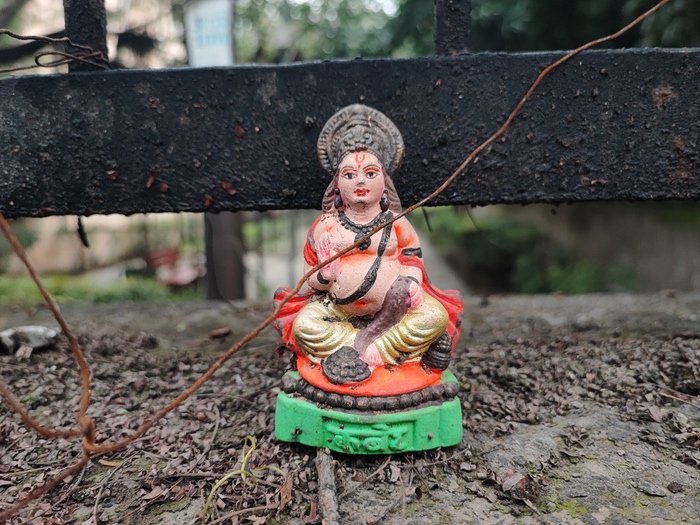 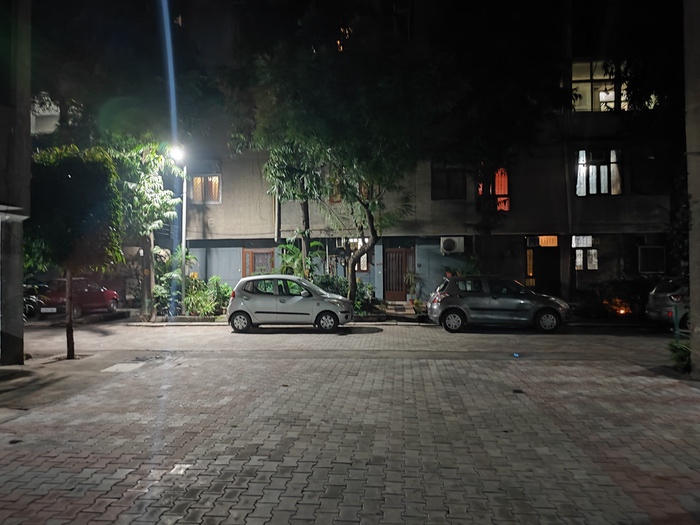 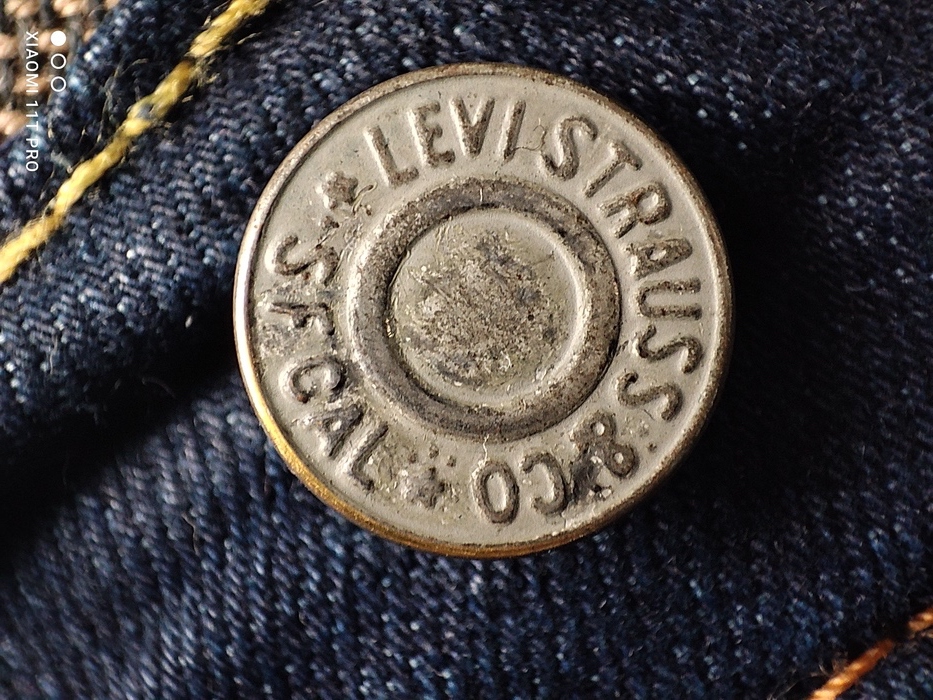 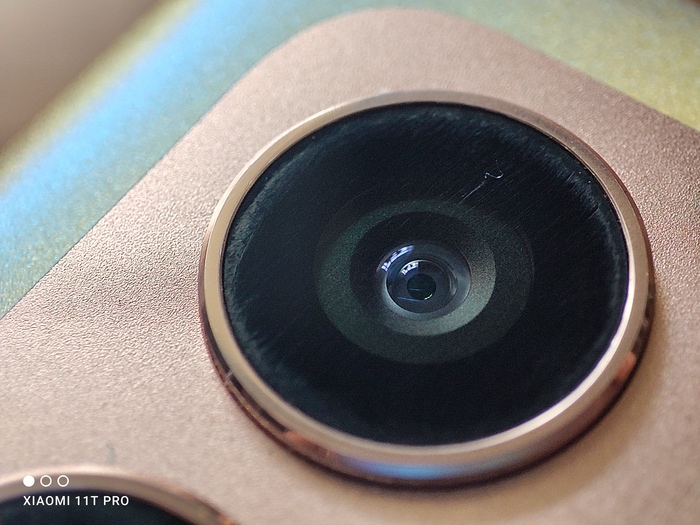 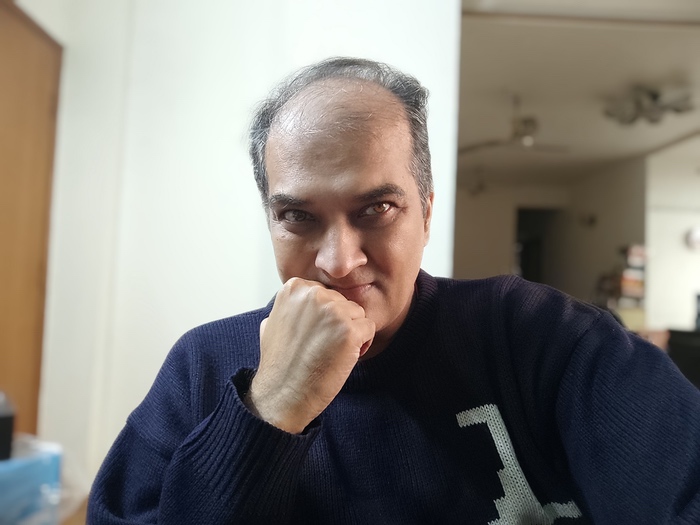 Low light performance is not quite the forte of the Xiaomi 11T Pro, with a fair amount of blur creeping in. Be patient enough with it, though, and you can get some terrific snaps. The 8-megapixel ultrawide sensor also takes decent-ish snaps and offers a wider perspective as long as you do not zoom in for details. The 5-megapixel macro camera with autofocus is a lot of fun to use, giving us a glimpse of what our eyes would otherwise not see – from dust specks on a lens to a very detailed look on the buttons of our denim jackets. Selfies from the 16-megapixel snapper are good if a little too smooth for reality at times.

That charged up feeling 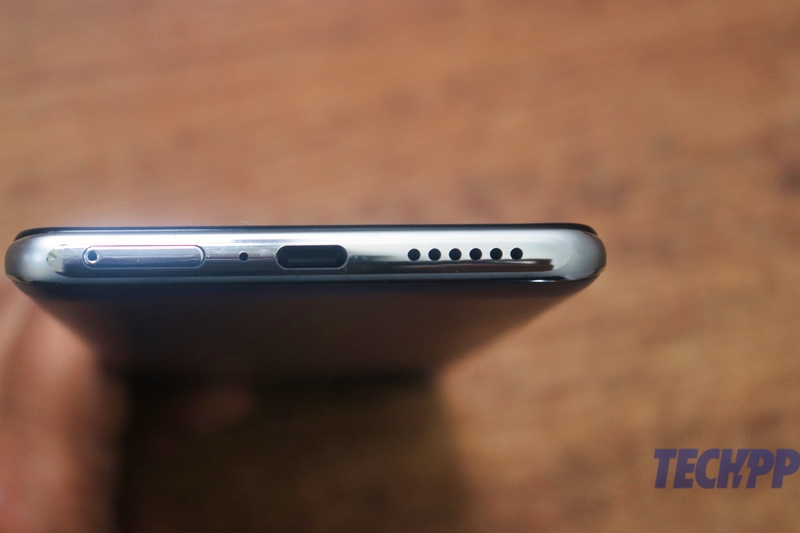 Xiaomi claims that the phone can be charged in about 17 minutes. It took around 22 to 25 minutes in our case, but even that is astonishingly fast when you consider the size of the battery in the phone. In addition, the phone gets slightly warm during the charging process but never reaches even close to alarming levels (Xiaomi claims to have a truckload of safeguards in place to protect the phone as well as its battery). The charger can also be used to power up notebooks and tablets if need be.

That 5000 mAh battery incidentally will comfortably get you through a day and more of normal to heavy use. You can even get well into the second day of usage if you are careful enough – mind you, the temptation to watch lots of videos and play games for hours on that large display is always there. You can also keep the refresh rate to 60 Hz to get more out of the battery. The refresh rate is set at 60 Hz by default, but we recommend scrolling speed addicts take it to 120 Hz. Mind you, with the sort of charging speed the Xiaomi 11T Pro has; you just need a few minutes of charge to be up and running for a while again.

The boss of budget flagships 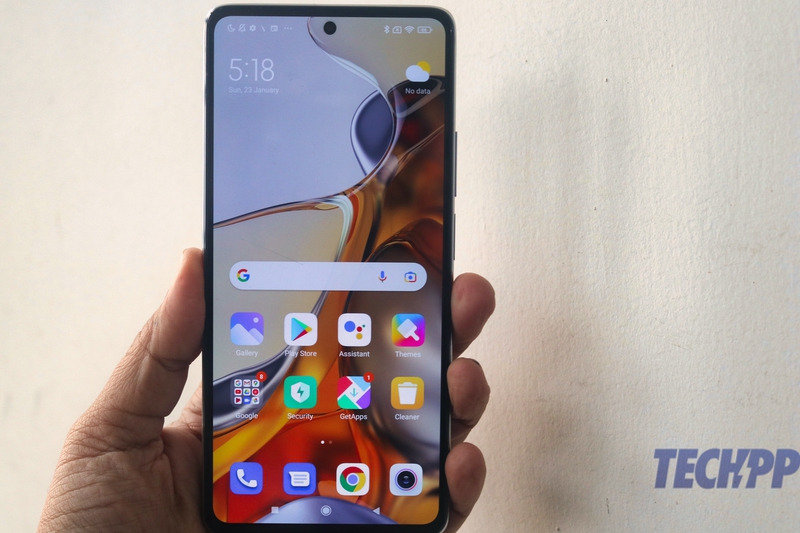 The Xiaomi 11T Pro is very hard to beat in terms of sheer value for money. The phone comes at a price of Rs 39,999 for the 8 GB/ 128 GB variant, Rs 41,999 for the 8 GB/ 256 GB one and Rs 43,999 for the 12 GB/ 256 GB variant. The likes of the iQOO 7 Legend and Xiaomi’s own Mi 11x Pro sport similar processors and come in the same price range but cannot match its combination of display, processor, speakers, and insanely fast charging (well, no one in the flagship segment can match that bit).

The most high-profile rival of the device, of course, is the OnePlus 9RT, which sports a similar processor and has a 120 Hz refresh display as well. It also comes with its own brand of fast charging (Warp Charge) but starts at a slightly higher price of Rs 42,999 for its 8 GB/ 128 GB variant. Of course, we will have a comparison between those two coming up shortly. Whatever the result of that confrontation, it is unlikely to change the fact that the Xiaomi 11T Pro is perhaps the best phone you can get for under Rs 40,000.

It might look relatively routine, but it is a super trouper in terms of performance and offers fantastic value for the price it charges. So, finally, the budget flagship segment has a boss!