If you have a budget of Rs. 15,000 to spend on a smartphone; the chances are that two phones will come at the top of your list will be the recently released Redmi Note 11 and the Vivo T1 5G. The two phones were launched on the same day, and even though targeted at roughly around the same price segment, they come with different styles and spec sheets. 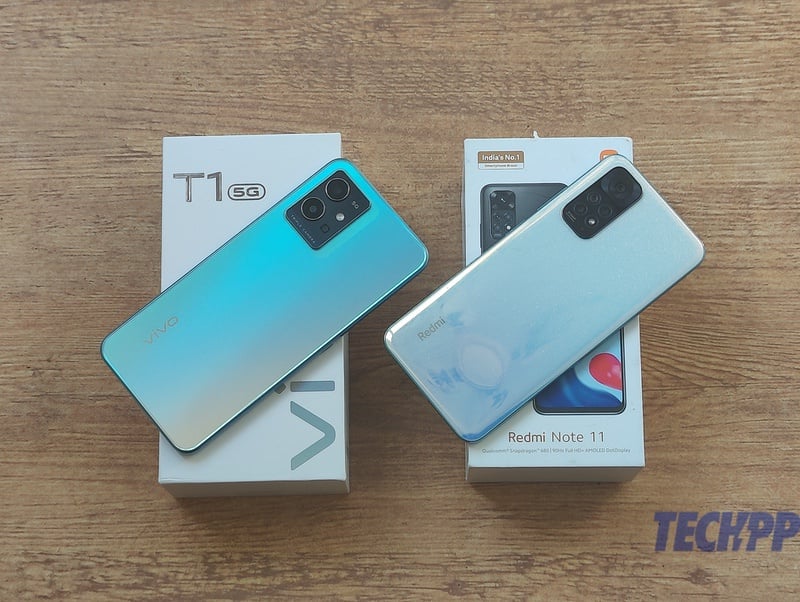 The Redmi Note 11 comes from the popular, almost legendary smartphone series, which is the most popular phone series from Xiaomi. In contrast, the T1 comes from a brand new series – the T series – that Vivo has launched with the phone itself. Given their pricing proximity, confusion between the two phones is pretty understandable. So we will pit these two smartphones against each other to help you figure out which one is for you.

Design: A blend of the old and the new

Both phones bring some aspects of modern as well as slightly dated design to the table, and it basically boils down to which one you would rather put up with. Both the Vivo T1 and the Redmi Note 11 have a plastic build, but the Vivio T1 handles the plastic on the back much better. We received the Rainbow Fantasy variant of the Vivo T1 and the Stardust White variant of the Redmi Note 11. Both phones come with a color-changing back where the colors of the back change slightly as the light falls on them and have an element of shine to them.

That said, Vivo T1 brings a more trendy flat back while the Note 11 has a more traditional, curved back. The plastic back of the Vivo T1 is slightly more classy looking and can actually pass off as glass, but the same cannot be said about the Note 11’s back. The phone is plastic, and while the back tries to hide it with a glossy finish, the plastic-ness just comes through. Of course, neither phone is bad-looking, but the back of the Vivo T1 certainly seems more premium and will turn more heads than that of the Note 11.

The story changes completely when you move to the front. Both phones have tall displays that rule the front, but it’s the elements around the display that give the Redmi Note 11 an edge over the Vivo T1. While both phones have pretty slim bezels around the display but a marginally thicker chin beneath, it is the notch that gives the Vivo T1 a slightly dated look. The phone comes with a drop notch which is kind of very 2019. The Redmi Note, on the other hand, is right up with the latest design trends of the front and brings a modern, punch hole notch to its display. 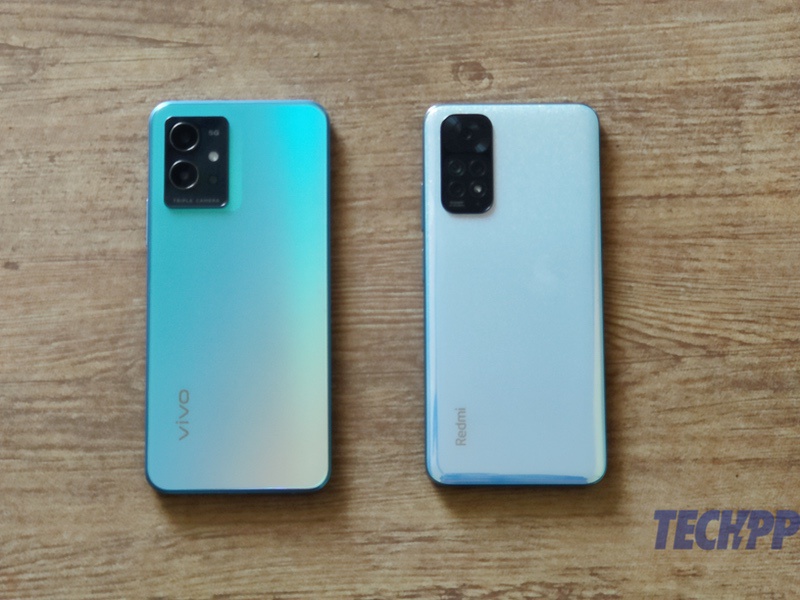 Both phones have flat sides and have a physical fingerprint scanner. However, the T1 is slightly heavier and a teensy bit thicker than the Note 11. The T1 is 8.25 mm thick, while the Note 11 is 8.09 mm thick. In terms of weight, the T1 stands at 187 grams compared to the Note 11, which weighs 179 grams. The two phones have good handfeel, but the lightweight makes the Redmi Note 11 feel better. The Redmi Note 11 also comes with an IP53 rating which makes the phone splash and dust resistant, while no such rating comes with the Vivo T1.

It is a tough design decision. The Vivo T1 comes with a trendy, modern back, while the Redmi Note 11 has a more up-to-date front. While we would have picked the Vivo T1 as it is more of a head-turner than the Note 11, the Redmi Note 11 also is lighter and has P certification. In this case, we think it would be fair to call this one a tie. 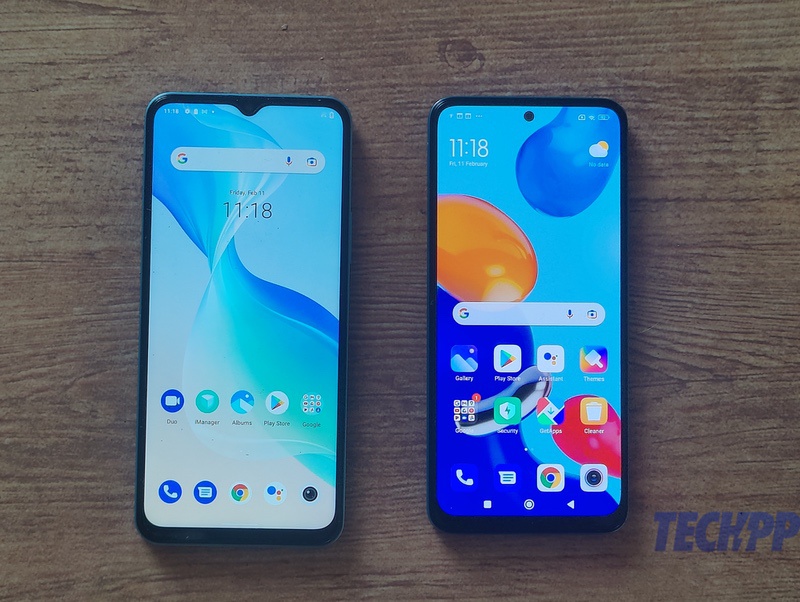 The design may have been a tie, but the display certainly isn’t. The Vivo T1 sports a 6.67-inch full HD+ display with a 120 Hz refresh rate. The Redmi Note 11, on the other hand, has a smaller 6.43-inch full HD+ display with a lower 90 Hz refresh rate. Now, these numbers and specs may suggest that the winning display belongs to the Vivo T1, but there is a twist here like every great story. The Vivo T1 has an LCD display, while the Redmi Note 11 sports an AMOLED display, which makes a world of difference.

Processor, RAM, and gaming: Chipping into the lead with a 695 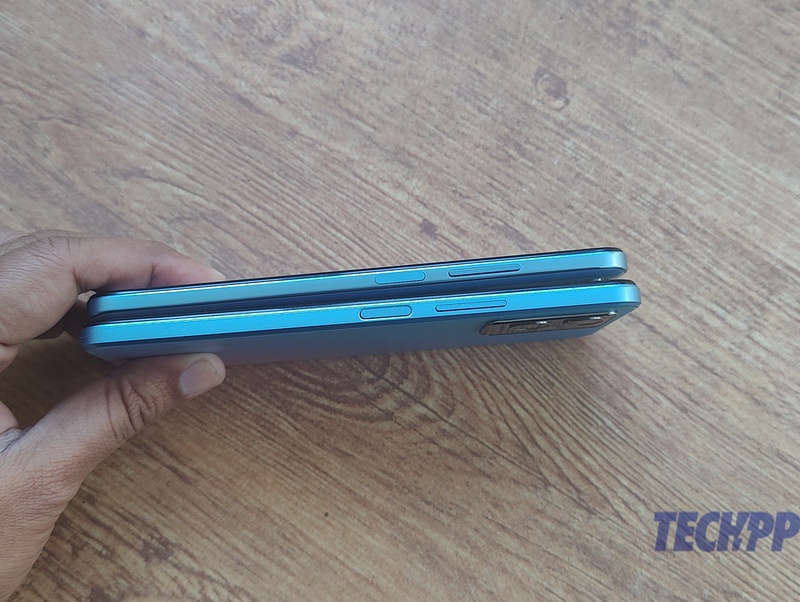 The Vivo T1 wins back lost ground here. The phone is powered by one of the latest offerings by Qualcomm, the Snapdragon 695 processor. The Redmi Note 11, on the other hand, runs on the Qualcomm Snapdragon 680 processor, which is less powerful. Neither phone can handle high-end gaming at maxed-out settings, but the Vivo T1 delivers a better, smoother gaming performance as compared to the Note 11. The Note does deliver better sound thanks to its stereo speakers, but it cannot match the T1 in other departments.

The Vivo T1 also offers more RAM options. It comes with 4 GB, 6 GB, and 8 GB RAM variants while the storage in all of them remains 128 GB – a huge plus considering you are getting 128 GB storage even with the base variant of the device. The Redmi Note 11 on the other hand has 4 GB/ 64 GB, 6 GB/ 64 GB and 6 GB/ 128 GB RAM and storage options. Both phones have the option to expand storage using a microSD card, but the Redmi Note has a dedicated slot for the purpose. In contrast, the Vivo T1 has a hybrid SIM slot, which means you will have to give up one of your two connections to accommodate a memory card. A more powerful processor, better gaming performance, and more RAM win it for Vivo T1. 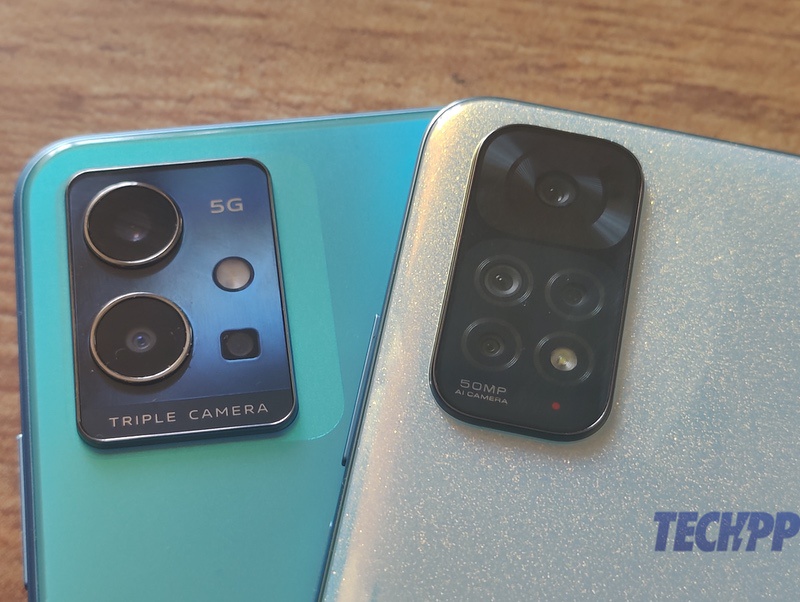 The camera numbers and composition on the two phones are quite similar, but the Redmi Note 11 brings an extra sensor to the table. The Vivo T1 has a triple camera setup on the back, which comes with a 50-megapixel main sensor and two 2 megapixel secondary sensors– one macro, one depth. The Redmi Note 11 comes with a quad-camera setup on the back with a 50-megapixel main sensor as well, an 8-megapixel ultra-wide sensor, and also two 2-megapixel sensors– one macro, one depth.

The camera performance of the two phones is pretty similar as well. Both phones do well in good light conditions and can deliver good colors and detail. There is one difference, though, the Note 11 delivers brighter colors while the Vivo handles details slightly better. While the Redmi Note 11 struggles to churn out a consistent low light performance, the Vivo T1 does decently in that department.

The T1 might be the preference of video creators as it offers you the option to shoot 4K videos at 30/60 fps, while that option is missing in the Redmi Note 11. But the Redmi Note 11 beats the Vivo T1 by offering a change of perspective (quite literally). The Note comes with an 8-megapixel ultrawide shooter, which offers a more expansive view and allows you to capture more landscape as compared to the Vivo T1, which does not have that option altogether.

The two 2-megapixel sensors on both are pretty much decorative and do not add much value to the photography experience. In terms of selfies, the Vivo T1 comes with a 16-megapixel sensor, while the Redmi Note 11 brings a 13-megapixel selfie snapper. Both front-facing cameras tend to “beautify” subjects a bit, but the Vivo T1’s selfie camera offers a bit more detail and slightly better color.

We would call this one a tie. The Vivo T1 scores on low light performance and its ability to take 4K videos, while the Redmi Note 11’s extra camera makes it the more versatile camera set up.

Multimedia performance: For and sound (and) sight experience 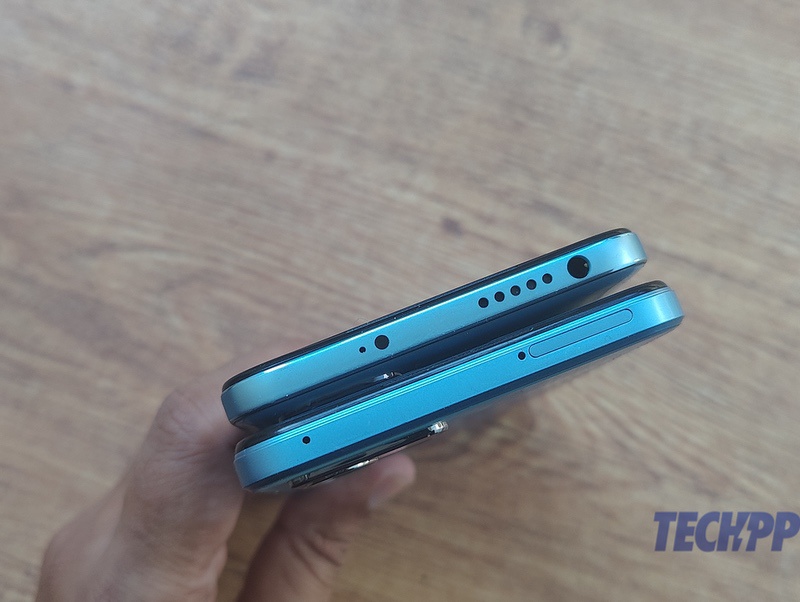 This one is quite a one-sided affair. While the Vivo T1 has a bigger LCD display with a higher refresh rate, the Redmi Note 11 actually brings a much better AMOLED display which reproduces colors better and is also brighter. The Redmi Note 11 also comes with stereo speakers and is also slightly lighter, making it an overall better prospect when it comes to viewing content. The Note is the one for the binge-watchers! 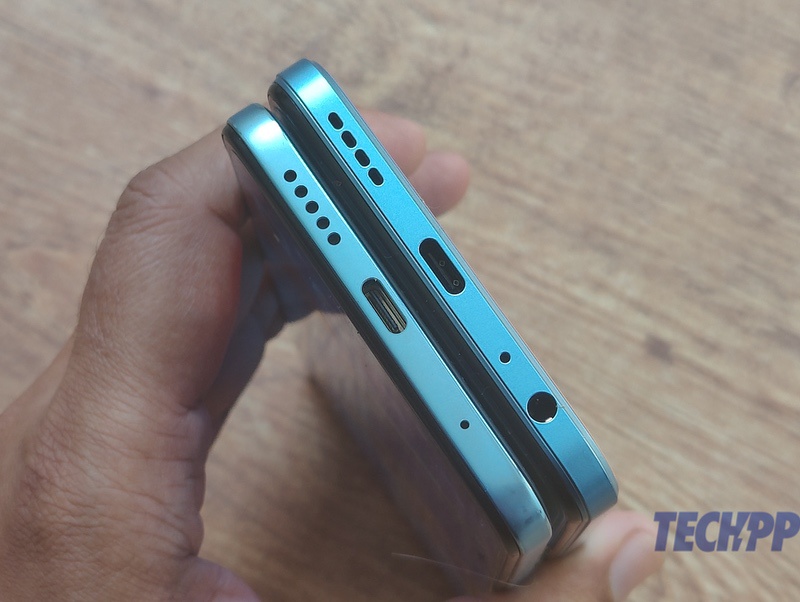 It might surprise some to know that these really slim phones hold a massive 5,000 mAh battery each inside. Both can easily deliver a day and a half worth of business without breaking a sweat, and if you are careful enough, you can even see them make it to two days on a single charge. But this is where the similarities end.

The Vivo comes with an 18W charger, which means that the phone takes about two hours to charge with a battery that big. That is not the case with the Redmi Note 11. The phone comes with a much faster 33 W charger which can charge the phone from zero to 100 percent in about an hour. That is a massive one-hour difference between the charging time of the two phones. The Redmi Note 11 is a clear winner in this category too. 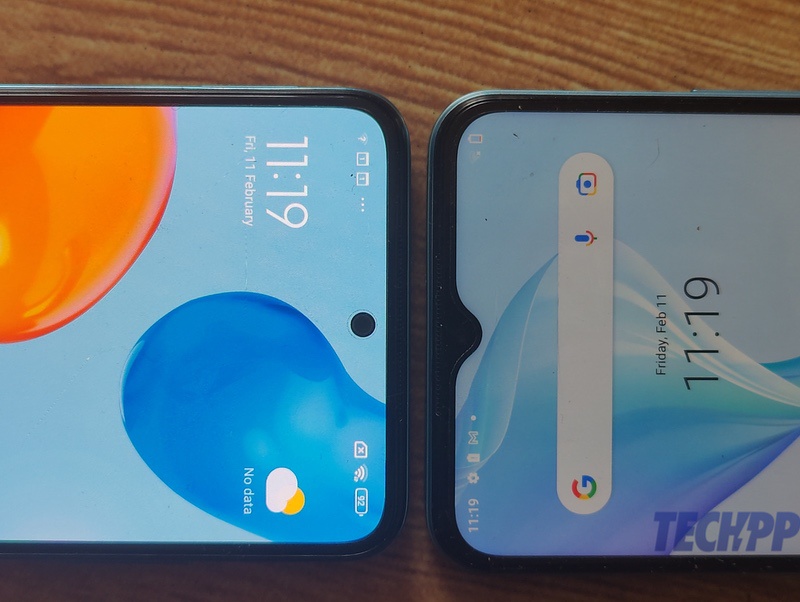 Both Redmi Note 11 and Vivo T1 have Android running the show with their own skins are on top. The big difference is that one runs on Android 12 out of the box while the other still comes with Android 11. The Vivo T1 is powered by Android 12 and is topped with Vivo’s FunTouch OS.

The Redmi Note 11, on the other hand, comes with Android 11 and Xiaomi’s brand new MIUI 13. We did face a few problems with Vivo’s FunTouch OS (the phone froze sometimes, and even apps crashed a couple of times), while the Redmi Note 11, on the other hand, delivered a smooth, lag-free experience. But we are still going to give this round to Vivo T1 because it comes with the latest version of Android, with bugs likely to get fixed in the coming days with software updates from Vivo. Unfortunately, there is no news on when the Note 11 will get Android 12.

Connectivity: How many Gs? 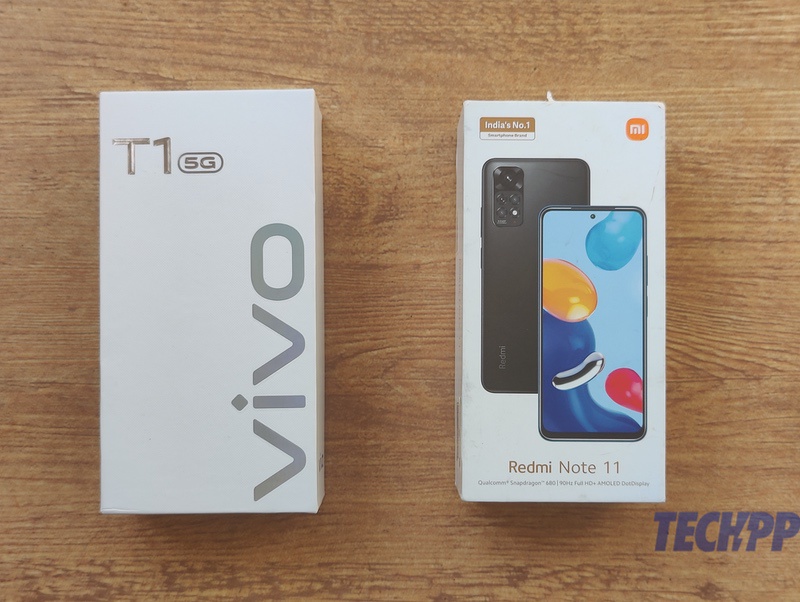 Price: The bucks do you need to pass 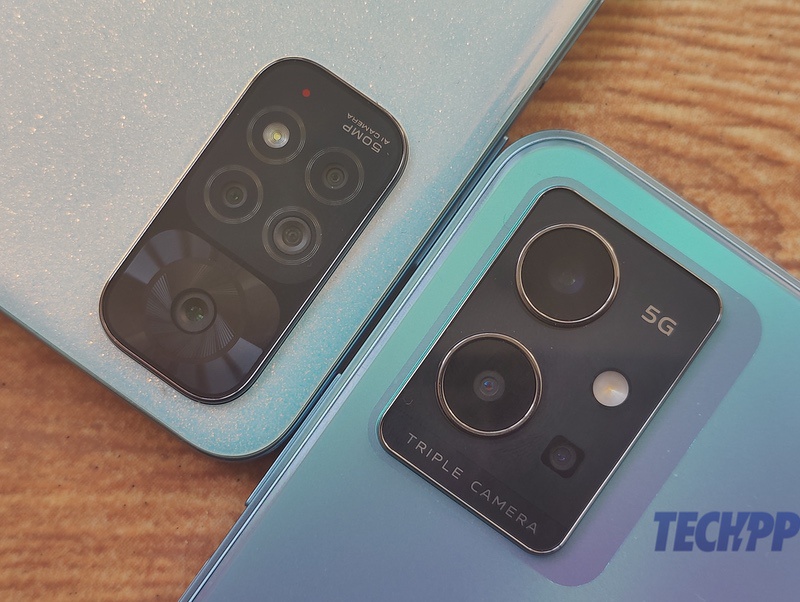 Conclusion: Perfection would be a blend of the two

This has been one close Tech-Face Off with both Redmi Note 11 winning four rounds, the Vivo T1 winning three rounds while two rounds between the two phones were tied. The Redmi Note 11 scored on Multimedia, Battery, Price, and Display while the Vivo T1 was ahead on Connectivity, Processor and Gaming, and Software. However, both phones were tied on design and cameras, two vital parameters for most consumers. A phone that is a blend of the two would be perfect. But that being tech utopia, we need to pick one. And choosing between the two is a tough task.

If you are looking for a device that can handle your daily business well and are not that much into gaming or concerned about 5G or Android versions, the Redmi Note will do just fine without costing too much money. But, on the other hand, if money is not an issue and you would want a faster processor, all things latest in your phone (Android 12, 4K video shooting ability, 5G), and can put up with slightly inferior multimedia and slower charging, then the Vivo T1 is the phone to go for.

Was this article helpful?
YesNo
TechPP is supported by our audience. We may earn affiliate commissions from buying links on this site.
Read Next
Redmi Note 11 Review: A REAL Note from Xiaomi, but not a killer one
#comparison #Face Off #Redmi #Redmi Note 11 #Vivo #Vivo T1