Nowadays, people can be so disruptive and have no limitation in the way they call others. For this reason, you can block such phone numbers if you are unnecessarily disturbed or receive unwanted calls. This feature has been around for a while, and Android has it integrated into the phone app, just like other smartphone operating systems.

If necessary, you can block calls from a known number or a private number. This will disconnect all incoming calls and text messages from the person, and your phone number will no longer be available to them.

Now, what happens when you need to unlock a blocked number on Android? Now you can receive calls and messages from that number again. However, some users get stuck when trying to unblock a number on their device. Therefore, we’ve compiled a list of methods to unblock a phone number on Android, which are described in detail in this article.

How to see blocked numbers on Android?

You may want to check the list of blocked numbers on your Android phone from time to time to see if there is someone you want to unblock for some reason.

This is a little different on Android phones, as some of them have a different interface design. However, searching for blacklisted numbers follows the same logic regardless of the Android phone you use.

Follow these steps to find blocked or blacklisted phone numbers on your phone:

Step 1: Go to the Phone App on your Android phone

Step 2: At the right-hand corner of your screen, click on the Settings icon( this may be in the form of three dots on some Android phones, and you may have to select Settings on the resulting menu after clicking on the three dots) 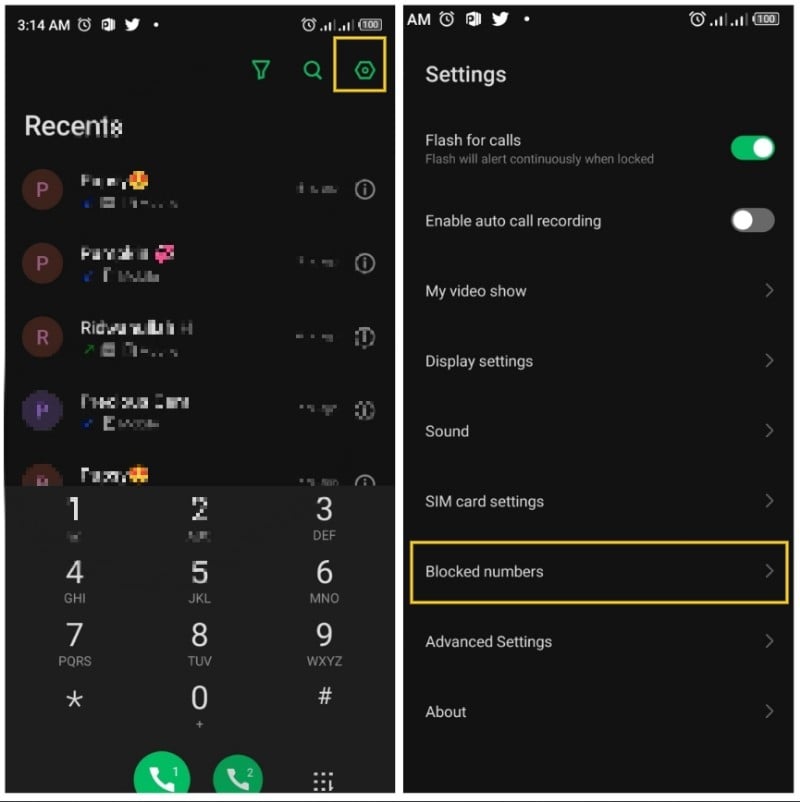 Step 3: Then click on Blocked numbers and select Blacklist/Blocklist to see the list of numbers you’ve blocked on your phone 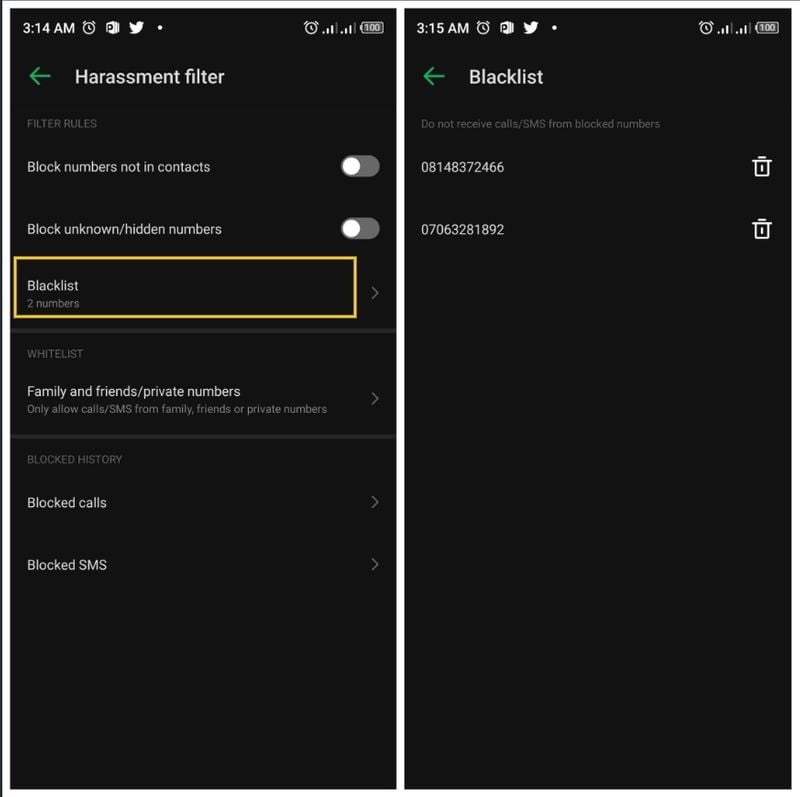 Tips: On this settings page, you can easily regulate the calls and messages reaching your phone. Also, you can specify that only unknown numbers will be blocked automatically, while saved contacts will not be blocked.

3 ways to unblock a number on Android.

On Android, unblocking numbers via the phone app is still the easiest and most accessible method that can be used. However, this can also be achieved through two different techniques, which will now be discussed.

If you wish to unblock a number on Android, you can effortlessly do this through your Recent calls list: 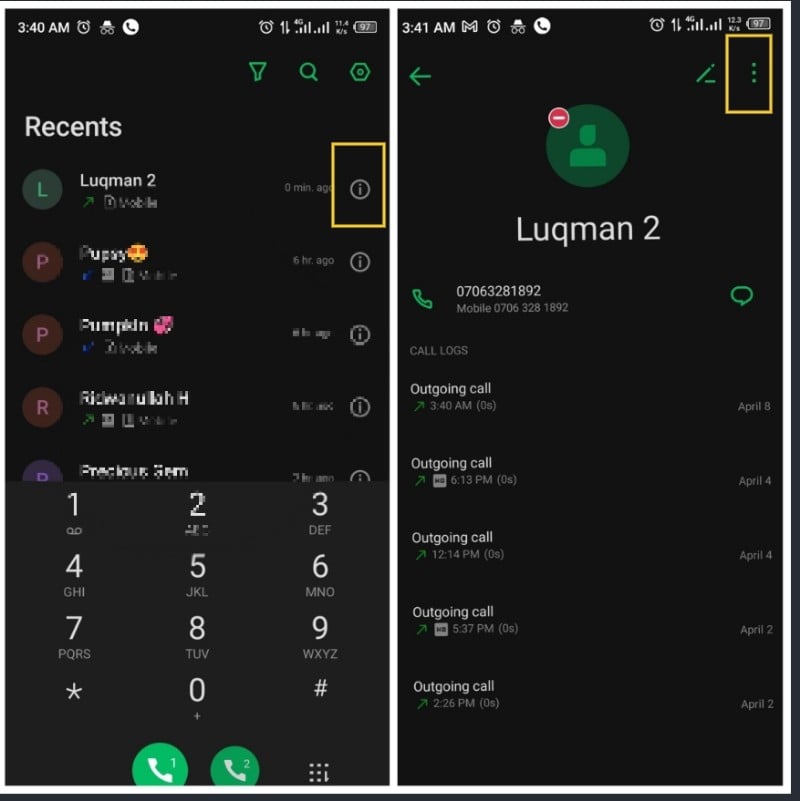 Step 3: Then hit the three-dot icon at the top right corner of the phone number’s profile page

Step 4: Click Block number and confirm the action by selecting Block on the resulting window. 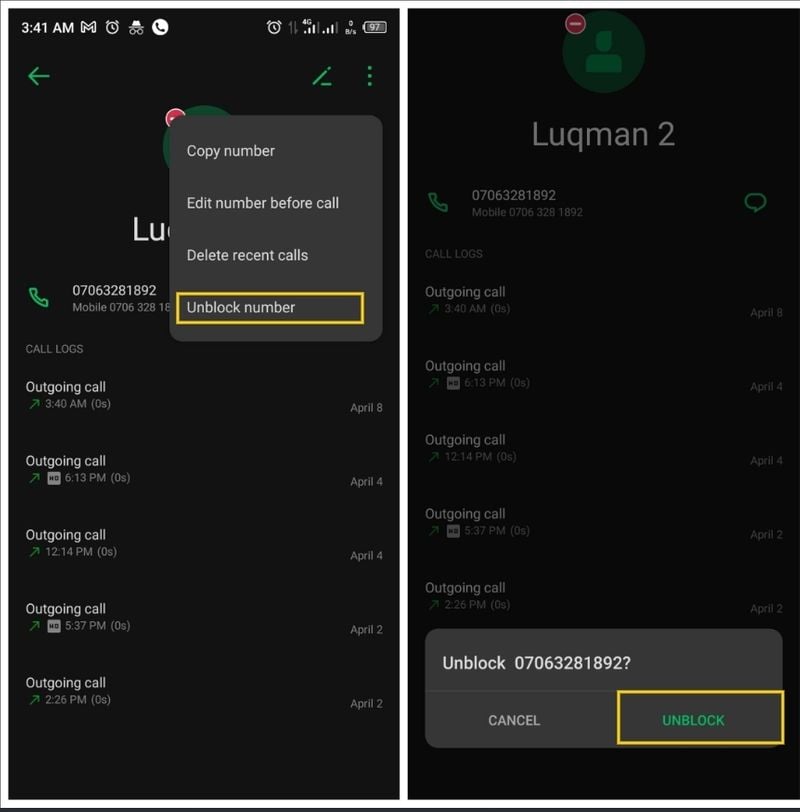 This method can be used to unblock only one number at a time, whether it is stored or unsaved. You can also unblock a saved number from your contact list by performing the same steps.

It can be exhausting to unblock one number at a time. Therefore, this method is best for you if you want to unblock several numbers at once. To do this:

Step 1: Open the Phone app on your device and select Recents.

Step 2: Click on the Settings icon at the top right corner of the Recents page.

Step 5: Then select Remove to start removing to start receiving calls and messages from the number(s). 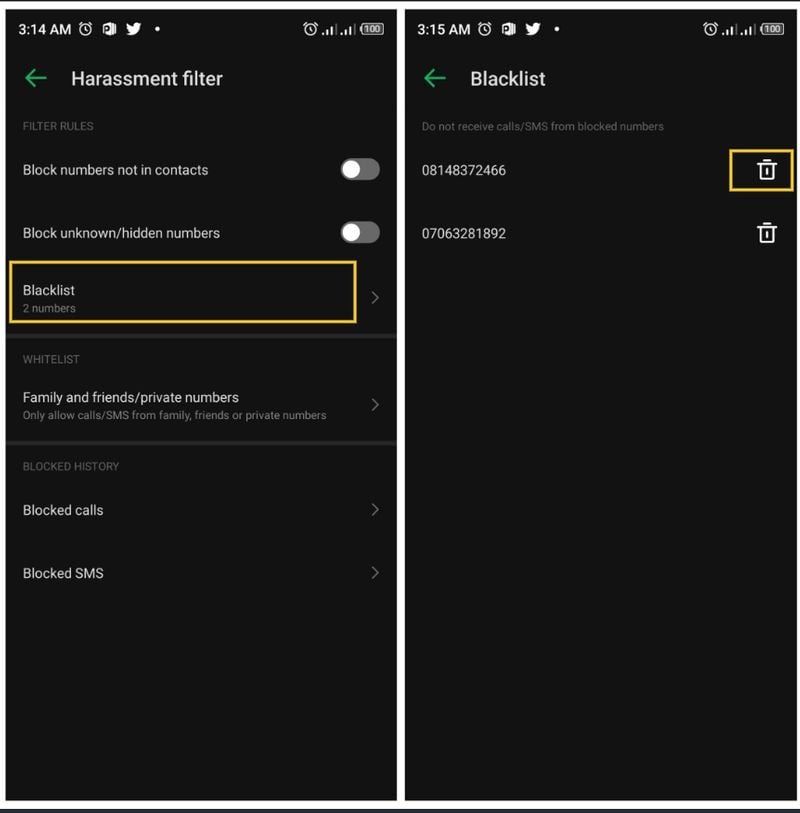 Note: As mentioned earlier, the technique may differ for other Android phones. The procedures serve as a guide for accessing the list of blocked numbers on any Android phone and removing the selected numbers from the list.

Third-party apps like Truecaller are also used to manage incoming and outgoing calls on Android. Some of us use such apps as the default calling apps for our Android phones. If you use Truecaller as your default phone app, you can unblock a number on Android by following these steps:

Step 2: Click on Blocking at the bottom of the page.

Step 3: Then scroll down and select Manage block list. 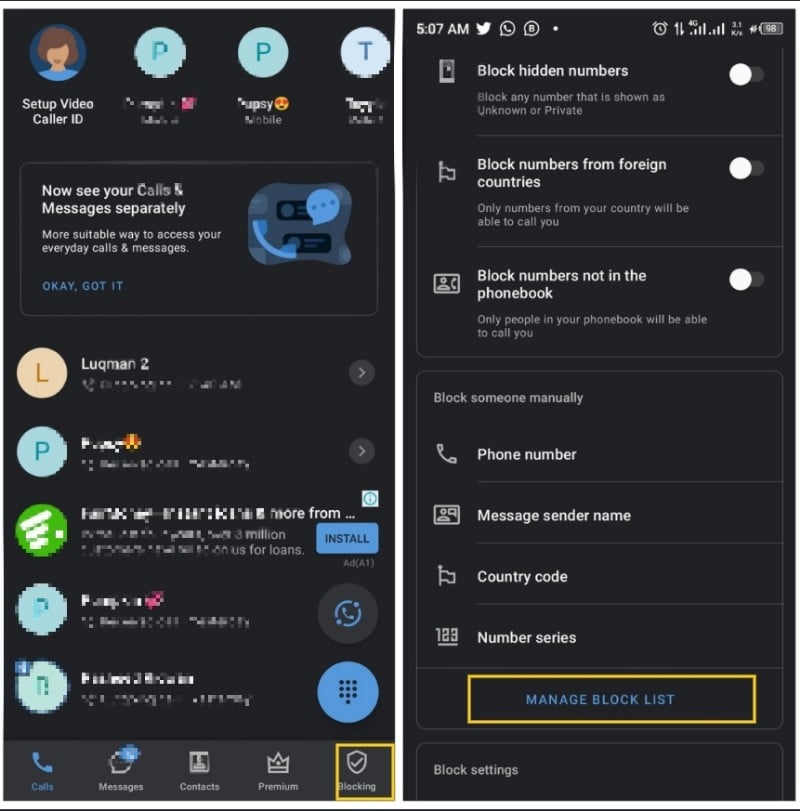 Step 4: This will reveal all the numbers you’ve blocked on the device, click on the minus sign at the front of the number you wish to unblock. 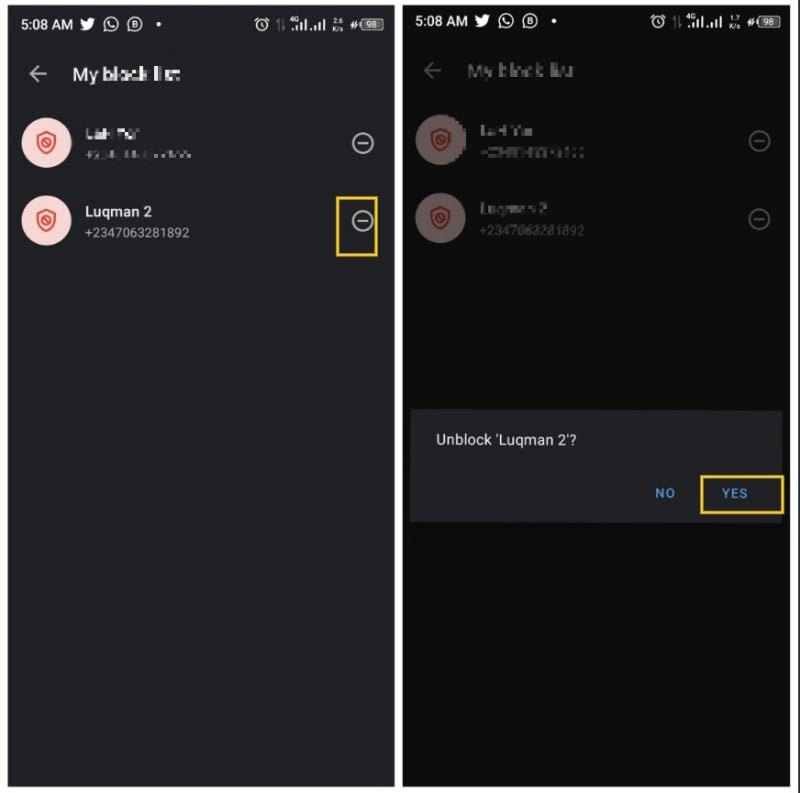 This approach should be taken only as a last resort. For example, if you have your smartphone data backed up somewhere and can easily access it when everything on your device has been deleted, you can perform a factory reset. Factory reset will return your phone to its original state, and everything will appear as new. In this case, all the numbers that were blocked on your phone before the process will be unlocked again. Follow the steps below to reset the phone to factory settings:

Step 1: Open Settings on your Phone

Step 3: Then tap Erase all data (factory reset).
Step 4: Follow all other on-screen prompts to complete this process.

Summing it all up, any of these methods can be used to unblock a number on Android, depending on the one that best fits your situation.

Can I block and unblock someone on Android?

Yes, you can block and unblock anyone on an Android device. When a number is being blocked, incoming calls from the number enter voicemail, and messages from the person will not reach. However, you can also unblock such a number when you feel like it with the steps detailed above.

Can I call a number I blocked?

Yes, you can call a blocked number on Android. This means you can still can a number that has been blocked whenever you want to but can from the other end won't be processed till you unblock such a number.

How do I unblock a text on my Android phone?

If you're looking for how to unblock blocked text messages on your Android phone, do this:

Step 1: Go to your Messages app

Step 2: Click on the three-dot icon at the top right corner of the screen.

Step 3: Select Spam & block from the options, this will show all the block texts on your device

Step 4: Then click on the text you wish to unblock and hit Not spam from the resulting drop-down menu.

There are a couple of easy ways to check your Blocked Numbers list on an Android phone.

How do you unblock a phone number on a Samsung Galaxy phone?

Again, there are a couple of ways to unblock a phone number on a Samsung phone. Here is the simplest way:

How to unblock caller ID on Android?

In order to unblock caller ID, follow these steps. It can vary slightly depending upon the manufacturer, but the general idea is the same

Was this article helpful?
YesNo
TechPP is supported by our audience. We may earn affiliate commissions from buying links on this site.
Read Next
How to Block a Phone Number on iPhone: The Ultimate Guide
#Block Phone Number #how to #how to guide #Phone Blocking