The ASUS BR1100C has made it to India, a laptop aimed at young students looking for a Windows-based learning device. The laptop has a compact yet rugged form factor that makes it immune to the not-so-gentle treatment by kids. The ASUS BR1100C is something a child would use as their first laptop, but does it have the bells and whistles to be a student’s learning companion? Let’s find out in our full review of the ASUS BR1100C. 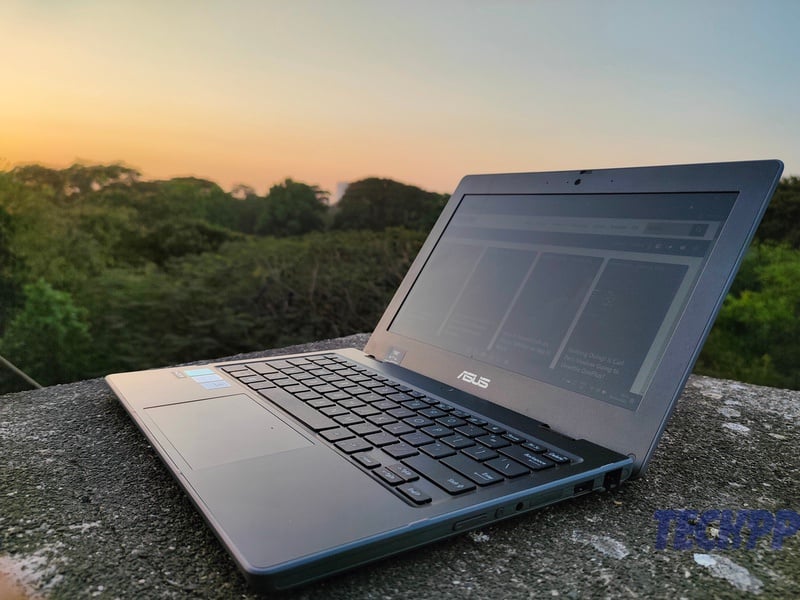 The ASUS BR1100 is available in two models in India, the BR1100C and the BR1100F. Both models have the same build quality and are powered by the same chipset. The BR1100F model has a 360-degree tiltable touchscreen and a stylus. The regular BR1100C has a 180-degree hinge for the screen and does without the touchscreen and stylus, making it more affordable. The device we tested is the ASUS BR1100C.

The ASUS BR1100C has a sturdy design and is made of plastic. The entire surface of the product feels rubberized to the touch. When you hold the notebook in your hand, it definitely feels different from a standard notebook as it feels sturdy in your hands. Despite the sturdy build, the BR1100C only weighs 1.26 kg and does not feel heavy when you pick it up.

The dimensions of the ASUS BR1100C are exactly the same as an A4 book. This means that the laptop will easily fit into your child’s backpack, which is usually smaller than our standard laptop bags. The device’s thickness is about 2 cm, which is acceptable considering the sturdy design. The keyboard is splash-proof, so you do not have to worry if your child accidentally spills water on it.

The ASUS BR1100C has a modular design that ASUS says makes repairs easier. The keyboard, thermal components, and other wear-prone parts can be replaced without replacing other parts. The overall construction of the BR1100C is solid and sturdy. However, the hinge is a bit stiff, and even an adult needs both hands to open the lid. 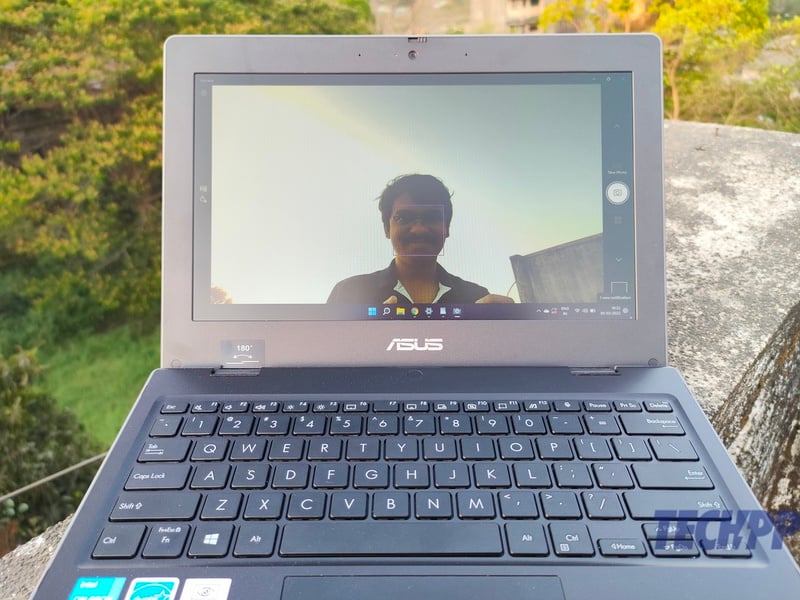 The ASUS BR1100C comes with an 11.6-inch LCD screen with a resolution of 1366 x 768px. The edges are noticeably thicker here, and it’s not the prettiest notebook of them all. The colors on this screen look a bit pale, and there are noticeable color shifts when viewing the screen beyond a 45-degree angle. The screen does its job in a normal posture, and the text is sufficiently sharp when reading. The refresh rate is limited to 60 Hz.

The ASUS BR1100C screen can be tilted up to 180 degrees, and the hinge performance is solid. The screen does not wobble while you type, and it locks in place quite well at the angle you set it up. Overall, the display is good enough for a laptop in this segment and serves its purpose. 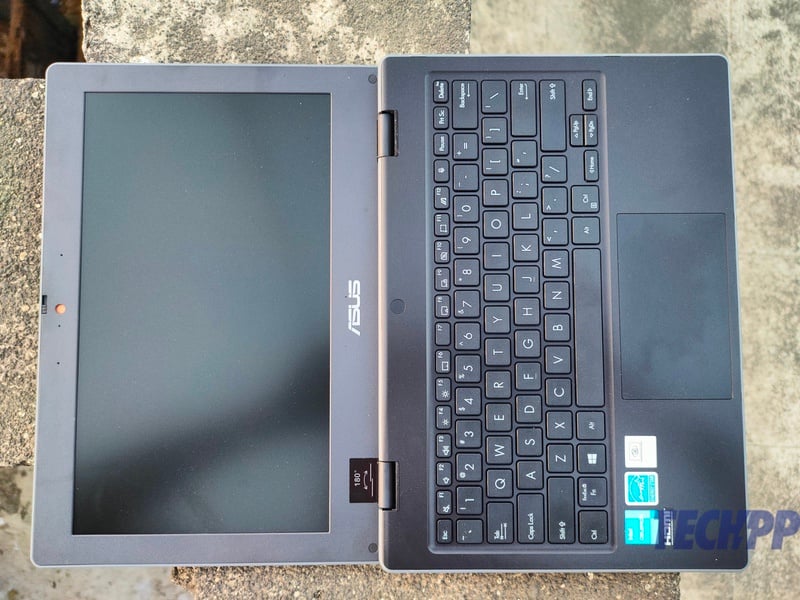 An Intel Celeron N4500 CPU powers the ASUS BR1100C, clocked at 1.1GHz. It is coupled with 4GB RAM and 128GB SSD storage. There is also a free M.2 slot that allows the user to expand the memory up to 1TB. On paper, the N4500 is not the fastest chipset on the market, and you have to have reasonable expectations when using it. The BR1100C is an entry-level Windows machine aimed at students who use it for tasks like note-taking, video lessons, and occasional surfing. And the Celeron 4500 present here is capable of doing that.

We tested the ASUS BR1100C with Google Chrome and Edge browser to use Google Docs, Google Sheets, and Google Slides. The reason for using these Google Services is that the BR1100C does not ship with Microsoft Office. For a device aimed at students, the lack of an MS Office package is a setback. Nevertheless, Google Docs and other services ran smoothly on the BR1100C, and the laptop remains responsive as long as you limit the number of tabs to a maximum of four. 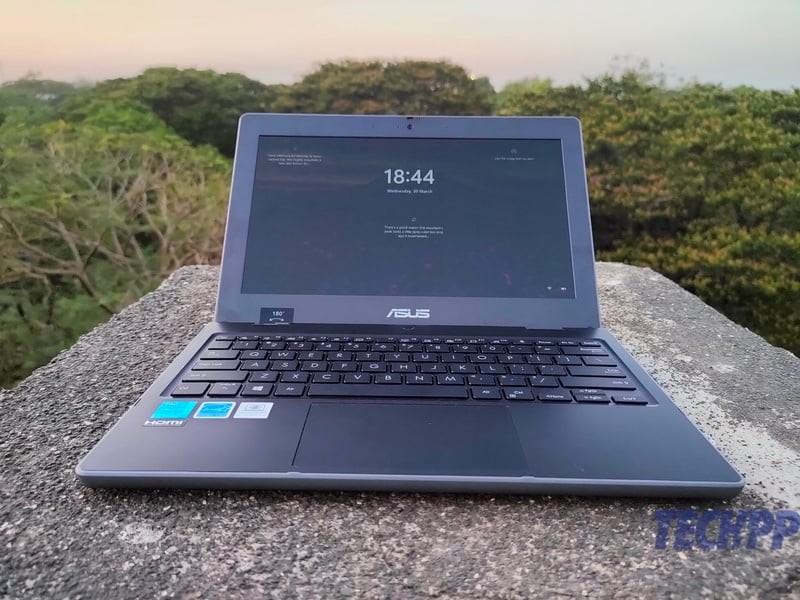 If you try to open more than four active tabs, the BR1100C’s 4 GB RAM becomes a bottleneck, and you will be faced with frequent tab reloading. So, four tabs is the ideal value here. We also tested it with YouTube, where the laptop can stream 1080p videos without any notable delays. However, when you try to stream videos with higher resolutions, it becomes necessary to close other tabs.

For additional testing, we also tried playing online games like Krunker.io, and the performance was only mediocre. The game was not playable as such, and we did not challenge the notebook further. The BR1100C is by no means a gaming laptop but rather a Windows-based alternative for Chromebooks.

The ASUS BR1100C features a fanless design, and the chipset here is not very demanding and does not generate excessive heat. In our test, the device did not feel warm even after an hour of typing and temperatures remained well under control.

All in all, the ASUS BR1100C is a decent package for students to take notes and create presentations, along with streaming video lectures. It will certainly meet all students’ needs while giving them a taste of Windows OS. 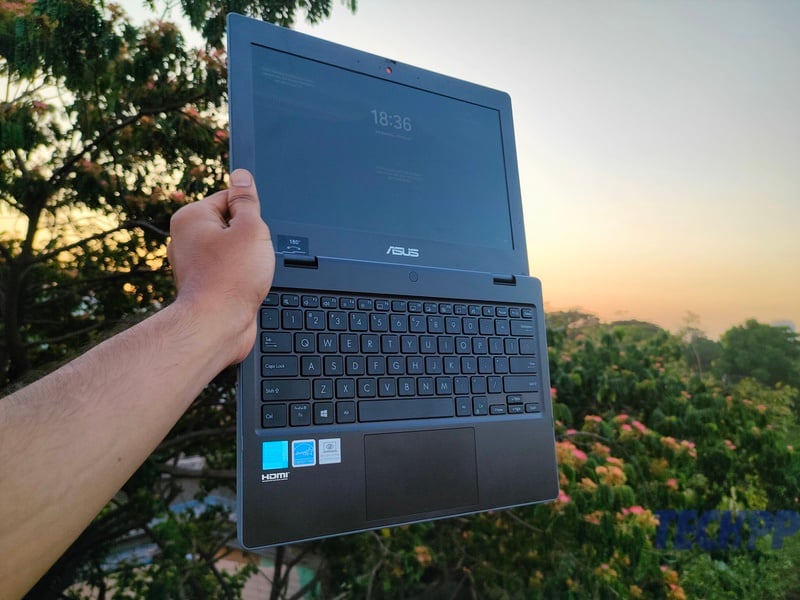 The ASUS BR1100C’s keyboard feels very compact and has a full set of function keys. However, the keyboard is not backlit. The keys are very responsive and give a clicky feel when typing. The compact size takes some getting used to, especially if you have long fingers. But considering that the majority of users will be students, the keyboard is big enough. We had no problems with ghost clicks while typing on this laptop.

The trackpad size is pretty good considering the overall dimensions of the BR1100C. The touch response of the trackpad was pretty accurate. Left and right clicks also work well. The trackpad is large enough to glance at and does not interfere with the palm resting area when typing.

Windows Experience on the ASUS BR1100C 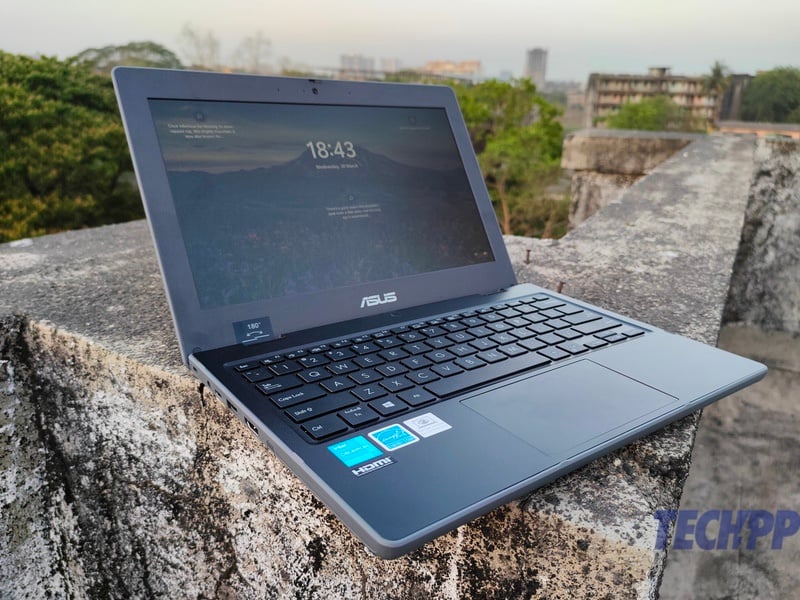 Out of the box, the BR1100C actually comes with Windows 10. However, when we got our hands on our unit, we connected it to our WiFi during setup, whereupon the device was updated to Windows 11. So, our entire test of the ASUS BR1100C took place under Windows 11.

Sometimes it feels like the 4 GB of RAM is a bottleneck for the BR1100C. But once you start your task, you will not feel much difference. The multitasking experience is not the best here, and you should limit yourself to using only one app at a time to get the best performance. Windows 11 was responsive, and we had no issues with Windows on the BR110C. 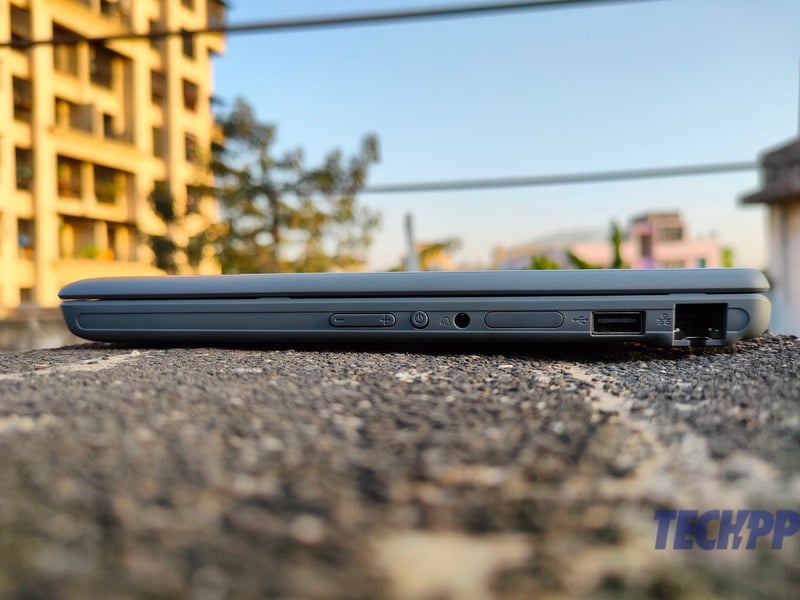 The ASUS BR1100C has a variety of I/O ports and peripherals. It also has a 720p webcam that comes with a physical privacy shutter. There is also a webcam indicator that lights up when the camera is in use.

The ASUS BR1100C has enough ports to connect a mouse and keyboard and plug in your headset. It also has dual-band WiFi and Bluetooth support for wireless connectivity. The notebook has two speakers that are loud enough to be heard throughout the room. The microphone setup uses AI-based noise filtering for better voice input.

The BR1100C has a LED display on the lid of the laptop. The LED indicator stays ON when the laptop is operating normally. It starts flashing slowly when the battery drops below 20% and flashes faster when there are problems connecting to the device. 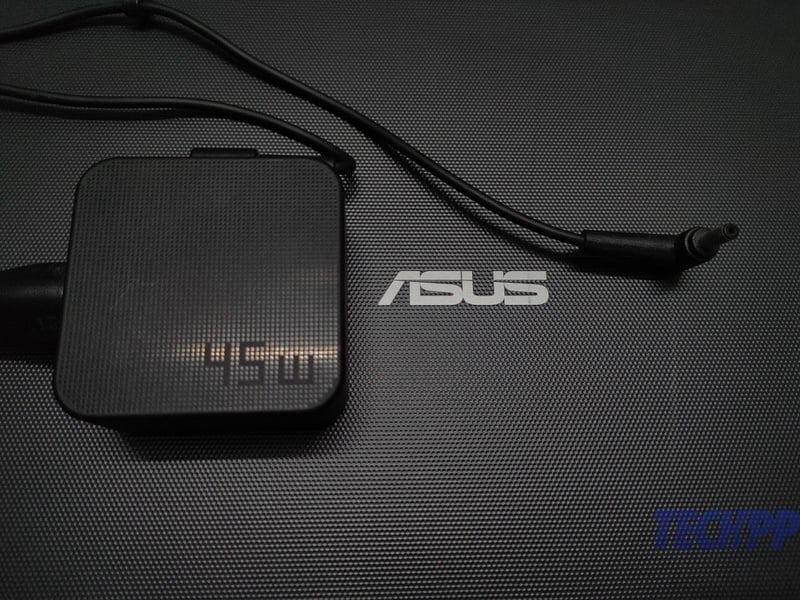 A 42 Wh battery powers the ASUS BR1100C. In our test, where we used the notebook to stream YouTube videos and write articles, we were able to achieve a battery life of about 7 hours on a 100% charge. Use was mainly indoors via WiFi, with the screen brightness set to 50%. Standby battery consumption was impressive, as the device used less than 10% charge overnight. 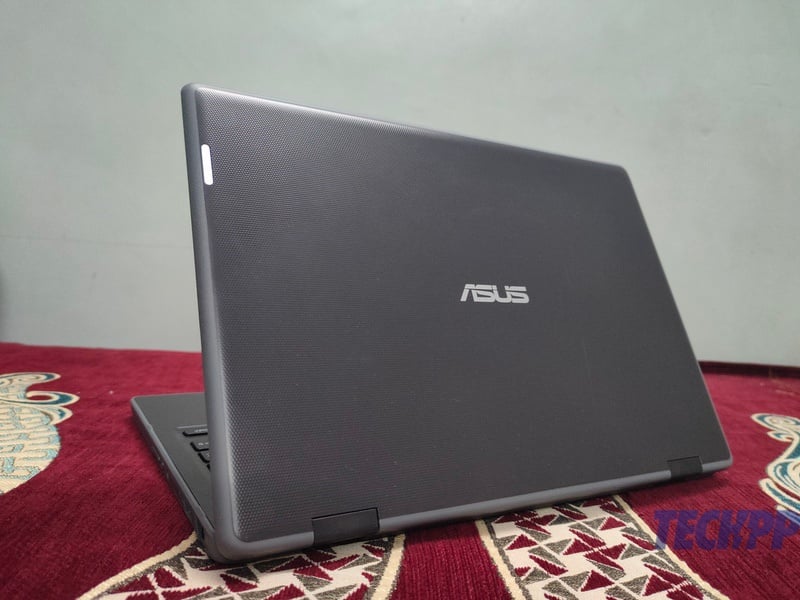 The ASUS BR1100C is a good choice for students looking for a Windows laptop for their study needs. The battery life of this model is enough to last a full day of study. Since it is a Windows device, students can run programs like Coding IDEs and more. The ASUS BR1100C is priced at 24,999 rupees in India and is available on Flipkart, ASUS Online Store, and select ASUS offline partners.

For this price, the build quality of the BR1100C is fantastic and definitely suitable for kids who may not be as careful with their devices as we adults are. The machine’s performance is enough to satisfy your child’s needs, such as typing, getting used to the Windows environment, and more, while being easy on the wallet. The ASUS BR1100C is a good choice for students looking for a Windows machine as an academic companion.

Review Overview
Was this article helpful?
YesNo
TechPP is supported by our audience. We may earn affiliate commissions from buying links on this site.
Read Next
How to Install and Use Intel Unison App on Windows, Android and iOS
#Asus #BR1100C #education #laptop review #review #Students #windows 11