A magnetic wireless charging station for Rs 4,999 will straightaway lead to exclamations of “too expensive,” even if it comes with the ability to charge three different devices. And with good reason. While wireless charging might not have yet become the mainstream phenomenon many pundits had predicted it would be, it is still popular enough for wireless chargers to be available at surprisingly affordable prices. Today, you can get a 15W wireless charger for under Rs 1,000. So, it is hardly surprising that the first reaction by many to DailyObjects’ Surge 3-in-1 Magnetic Wireless Station would be, “that’s too expensive; what’s so special about it?” The answer to that question is: actually, quite a fair bit, as we shall see. 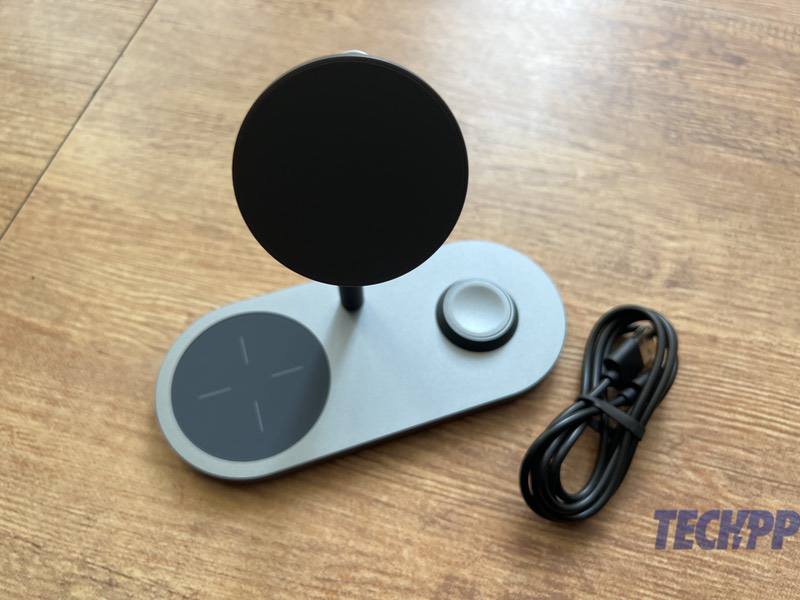 As its name indicates, the DailyObjects’ Surge 3-in-1 Magnetic Wireless Station is designed to charge three devices together wirelessly. It can charge a phone, a TWS, and a watch simultaneously. Or, to be more exact, it can charge a Qi-enabled phone at up to 18W, a Qi-enabled TWS at 5W, and an Apple Watch at 2W. Those wireless charging speeds are decent but not crazy exceptional. What makes the Surge 3-in-1 special is how all this has been put together.

Design is a massive part of it. The Surge 3-in-1 pretty much screams “premium” at you. It is made of high-grade aluminum alloy and has a minimalistic and sleek metallic look to it. It is something you would not mind being on your study desk or office table. It would fit right in there, too, because it is surprisingly compact for a charging station that supports three devices at the same time. Its base is actually about slightly longer than an iPhone 13 Pro Max, less wide, and almost as slim.

It has an upright 140 mm tall tower (less tall than most smartphones today) with a movable magnetic charging disk on its top in the middle of the base. This is flanked by two other charging points on the base itself. Thanks to its compact form factor, It is effortless to find a place for it, especially compared to the much larger “charging trays” that we have seen. If you have enough room on a table for a large smartphone, you have room for the Surge 3-in-1. The presence of that tower makes it a little challenging to carry around, but this is still a very compact charging station. Perhaps the next edition could have it in foldable form, allowing it to be folded down when you need to carry the station around. It is very solidly built and very stable as well. 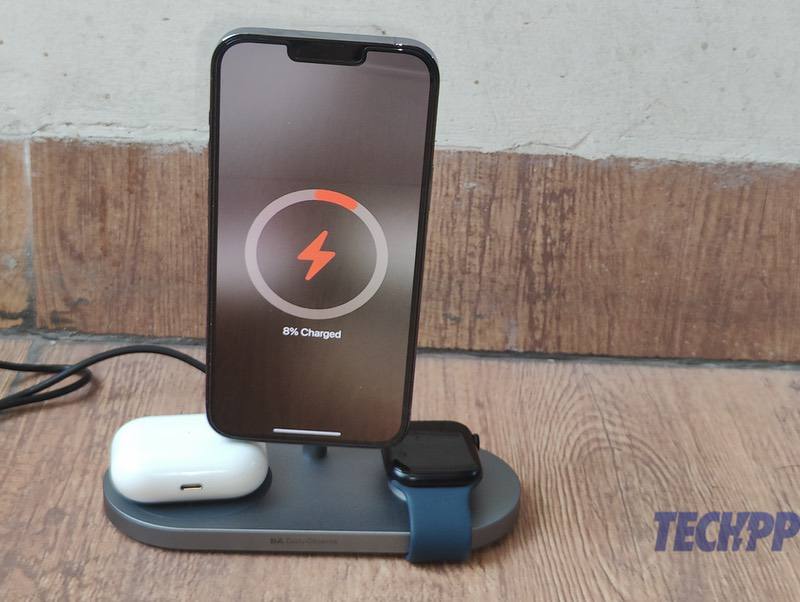 It works brilliantly, especially if you are using an iPhone, AirPods with wireless charging cases, and an Apple Watch on it. The magnetic charging disk on the top of the tower can be moved and supports MagSafe charging. So you can literally park your iPhone 12 or above on it, and it will attach magnetically and get charged. As the charging disc can be moved, you can even adjust your viewing angles. The magnetic force is even strong enough to let you use the phone while it is mounted on the stand. So you can literally keep using your iPhone while charging it wirelessly. AirPods with wireless charging support and other Qi-enabled TWS get charged on the larger of the two charging points on the base, while the slightly protruding, smallest charging point juices up the Apple Watch. 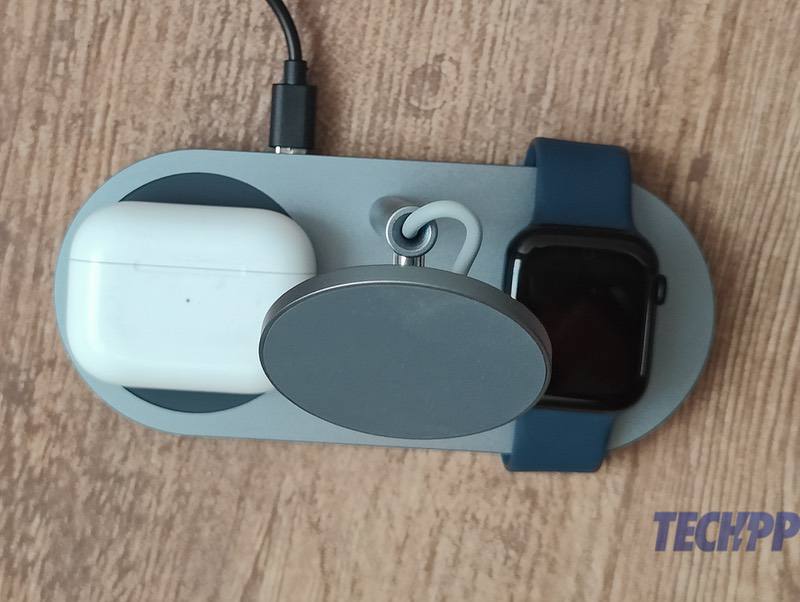 If you use a 25W power charger (you will have to get one, as all you get is a USB to USB Type-C cable in the box), you will get the charging speeds the station supports – up to 18W for the phone, 5W for the TWS, and 2W for the watch. It is not super fast by any means, but it is as good as mainstream wireless charging gets for iPhones, AirPods, and the Apple Watch. The station connects to a power outlet through a USB Type C port. A tiny LED light next to the port flashes blue when you connect the station to the power outlet and changes to red when you place devices to charge on the station.

However, move out of the iPhone zone, and things get a little shaky. Android devices and iPhones before the iPhone 12 and the recent iPhone SE will not attach magnetically to that movable disk. DailyObjects has bundled a Universal Metallic Ring that can be attached to the back of phones that do not attach magnetically to the station, making them stick to it magnetically. However, this ring can be used with just one device. If you have phones with non-magnetic backs in the house, this station’s utility gets diminished. While the charging disk can be adjusted, it cannot be made totally horizontal, which would have let us place a phone on top of it. The charging base for the Apple Watch also cannot be used for any other device – other watches will not charge off it. 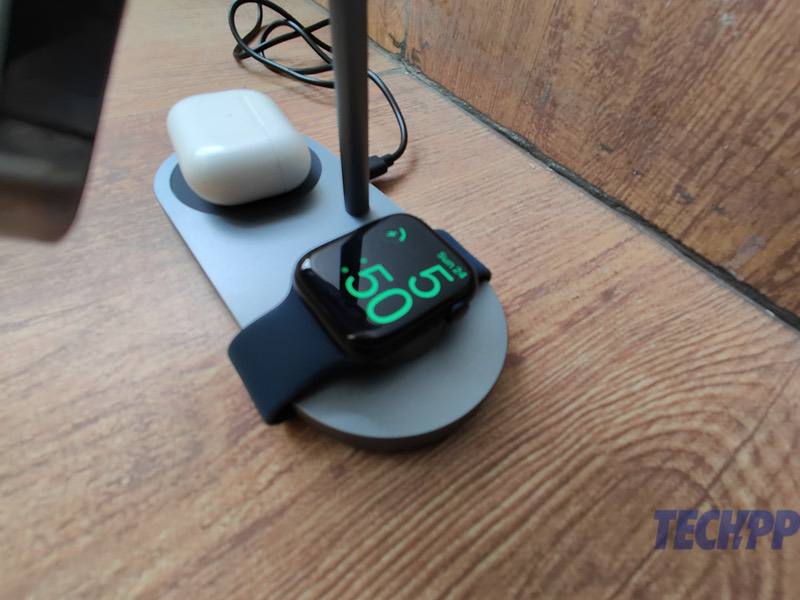 All of which makes the DailyObjects’ Surge 3-in-1 Magnetic Wireless Station a terrific proposition for anyone who actually has an Apple Watch. They would, of course, have an iPhone paired to it and thus would be able to use two of the three charging points of the station optimally. The best thing about the charging station is how well-designed and compact it is. It is a great gadget to have right on your table, next to your workstation, so that you can keep your devices charged, and in the case of the iPhone, keep using it while it is charging as well. It is sleek, discreet, and well, while it is not super fast in terms of charging (an iPhone 13 Pro Max takes more than two hours to get from 0 to 100 charge), it is a perfect “keep everything charged” companion on your desk with zero heating or safety issues. With only a single wire needed to connect it to the power outlet. No need to carry multiple chargers and worry about different charging points.

The big question is: is it worth paying Rs 4,999 for? Well, if you have an iPhone that is the iPhone 12 or newer (and not an SE), an Apple Watch, and AirPods that support wireless charging, we would put it close to being a no-brainer. It is incredibly convenient to use and has a wonderfully reassuring premium and solid feel to it. If, however, your combination of devices is outside the Apple ecosystem, the value of the charging station dips a little. Or make that “a lot”, as most folks using an Android phone would not be able to use an Apple Watch, and hence one charging point of this station would go waste. But if you are in the Apple ecosystem, and have an iPhone and an Apple Watch at least, the DailyObjects’ Surge 3-in-1 Magnetic Wireless Station is a worthwhile investment.

Review Overview
Was this article helpful?
YesNo
TechPP is supported by our audience. We may earn affiliate commissions from buying links on this site.
Read Next
iQOO 11 5G Review: Does It End Your Quest for the Ultimate Smartphone?
#Accessories #Apple Watch #DailyObjects #review #wireless chargers #wireless charging