So the iPhone 14 is official. And in a rather surprising twist of events, it is actually not so different from its predecessor, the iPhone 13. We are not just talking about design here. For the first time in a few years, a new iPhone has come with a processor that is similar to the one that was seen in its predecessor.

Before we proceed with an in-depth comparison, here is a summary of the major differences between the iPhone 14 and the iPhone 13.

iPhone 14 vs iPhone 13: Similar surface and, surprisingly, even a similar soul

Both phones look broadly similar, with similar displays (6.1-inch full HD+, Super Retina XDR OLED), similar “aerospace-grade” aluminum frames with straight sides, similar storage variants (128 GB/ 256 GB/ 512 GB), and almost the same proportions. However, the iPhone 14 is just a little thicker. Yes, they have slightly different color variants, but most people are unlikely to be able to tell them apart even if they shamelessly extended stare at them, let alone a glance.

So, if it looks the same on the surface and it has a very similar soul, then why on earth would anyone opt for an iPhone 14 over an iPhone 13? We have not used the iPhone 14 yet, but based on what we know of the device so far, the answer is not a clear-cut one.

iPhone 14 vs iPhone 13: The new iPhone does have enhancements

A lot really depends on the kind of value you attach to the different features Apple has added to the iPhone 14. For the geeks, the additional core on the processor itself might make a difference. We never really could spot a very noteworthy difference in the performance of the iPhone 13 and iPhone 13 Pro, but there might be something out that the pixel peepers and frame rate counters might spot.

Perhaps the most decisive difference between the two iPhones is with regard to cameras. In terms of megapixel count, the iPhone 14 and iPhone 13 might have the same set of cameras – two 12-megapixel cameras on the back and a single 12-megapixel camera in front – but beneath that megapixel similarity lie some very significant changes. 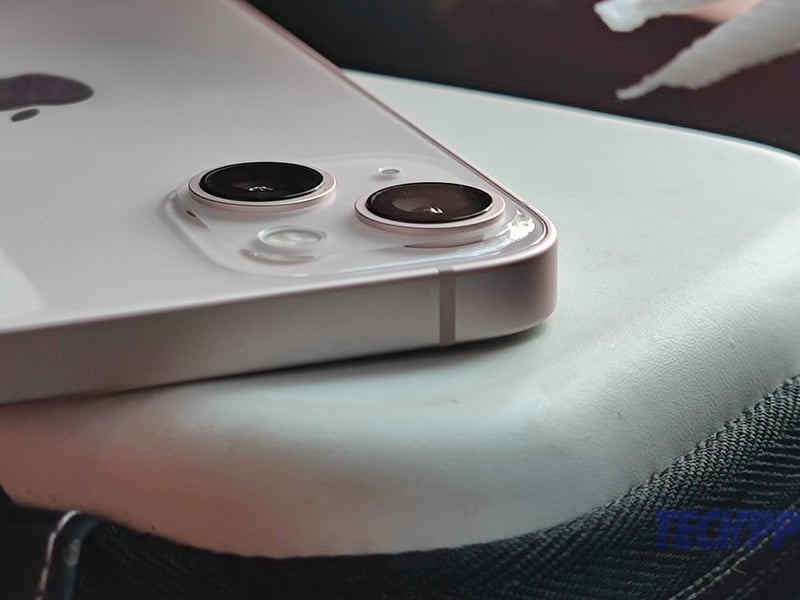 Apple claims that the iPhone 14 comes with an improved sensor and while we will need to use the phone to find out if that claim is true, there is no denying that, on paper, the iPhone 14 does seem to have a better set of snappers. The iPhone 14’s main sensor has a large f/1.5 aperture compared to the f/1.6 on its counterpart on the iPhone 13 and also comes with support for the Photonic Engine, both of which should make it a much better proposition in low light photography.

Those with a slightly paranoid bent of mind will also find the iPhone 14 more appealing, with its crash detection feature as well as emergency SOS (using satellites when no network is reachable). The iPhone 13 lacks both features. Finally, there is the matter of battery life. We had pointed out that the iPhone 14 was slightly thicker than the iPhone 13 earlier. It might well be because of its larger battery. Apple does not give out battery wattage numbers but has claimed that the iPhone 14 delivers one hour more of video playback and five hours more of audio playback on the iPhone 14, as compared to the iPhone 13.

iPhone 13 vs iPhone 14: Are those extra features worth the extra bucks?

The point, however, to keep in mind is whether these enhancements actually are worth the roughly Rs 15,000 extra in India or the extra USD 150 overseas. For the fact is all said and done, the iPhone 13 still remains a very formidable device. We have been using it for over a year now and never have had reason to complain. The improvements that the iPhone 14 brings to the table might make it a better device, but the big question is going to be whether that difference is noticeable in routine use. We have already remarked that we could barely discern any major difference between the iPhone 13 and iPhone 13 Pro (which has the same chip as the iPhone 14) in most routine tasks and even gaming.

Similarly, the cameras on the iPhone 14 seem to be a clear step forward from the iPhone 13. Still, perhaps the only thing we really missed on the iPhone 13 in the camera department was a telephoto, which we do not get with the iPhone 14 either. 4K video might be great for those needing to work with many videos, but the vast majority of displays worldwide still support full HD. The same goes for battery life – we love getting extra hours of battery, but we really did not feel deprived in that department when we were using the iPhone 13.

Of course, it needs to be remembered that this discussion is largely theoretical at the moment. We have not really used the iPhone 14 at the time of writing, and we know that specs are not really an indicator of how well an iPhone performs. So for all we know, the iPhone 14 might turn in a performance that justifies the extra bucks it charges. But on paper, the iPhone 13 runs it perilously close. So much so that if you are on a relatively tight budget, we would recommend going for the iPhone 13. The iPhone 14 might be worth more for all we know. Still, the iPhone 13 remains amazingly good value for money and, thanks to Apple’s decision to retain similar processors on both phones, is unlikely to be too far behind in terms of performance.

Was this article helpful?
YesNo
TechPP is supported by our audience. We may earn affiliate commissions from buying links on this site.
Read Next
Apple Close to Something Greater than the Mac, iPod or iPhone
#apple #comparison #iPhone 13 #iPhone 14