Over the years, I have bumped into several people who have had jaibroken their iPhones (or iPod Touches) just because they could install pirated and cracked apps for free (which is sick). This practice has become so rampant that many believe and argue that jailbreaking directly promotes piracy (which is not true).

If installing the cracked applications is the main motive behind jailbreaking, a certain iPhone hacker, iPAGod has found a way to do that without jailbreaking your device, so that you still retain the Apple warranty. 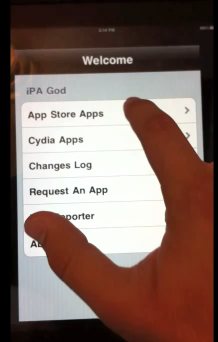 Shockingly enough, iPAGod app is not using any new or existing exploit in iOS. Rather, it uses a method created by Apple for developers to share their apps for beta testing over the internet.

iPAGod lets you install cracked Apps on iPhone iOS 4.1 and recently released iOS 4.2 Beta. The app is in beta testing & yet to be released to public and as per iPAGod app developer it may cost around 20$. Below is the demo video of iPAGod

No wonder, the hacker is not even trying to submit is app to the app store and he says that the app will be available for download from his website. It won’t be long before Apple fixes the loophole. I hope that happens even before this app gets released.

Best Reminder Apps for iPhone in 2022
Read Next

Has Vivo X50 Pro finally cracked the starry mode for…
Has Xiaomi cracked the premium puzzle in India?
TextSniper lets you Capture Text from Images and Visual…
tabExtend is a Powerful Extension that Lets You Manage…
Potion Lets You Set Up a Custom Domain for Your Notion…
Google now lets you Van Gogh and Da Vinci your photographs……