After all the baseless allegations by some bloggers regarding the authenticity of Notion Ink Adam, Rohan Shravan, the CEO of Notion Ink has released a new video detailing the 180 degree port placement of the Android based tablet. 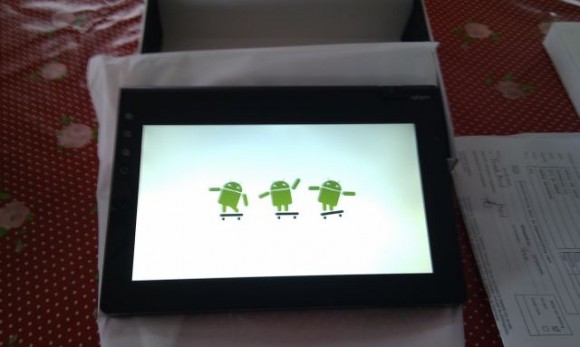 Over the last 3 days, Rohan has been releasing one video-a-day and all of them were regarding the user interface of Adam, aptly named EDEN UI. Some bloggers had still raised fingers at Rohan for not showing the hardware part of the tablet and even wondered if the hardware was ready yet. This latest video should answer them.

The picture at the beginning of this post is actually a leaked pic, by Van Gunst, a Dutch developer who claims that he got the tablet delivered to his home by Notion Ink to help them develop some apps. Yet another proof for rumor-mongering sensationalist journalists. Yes, it has been a rough road for the young company ever since they made an appearance at CES 2010, but it is expected of a start-up with some resource crunch.

Anyway, coming back to the video of the hardware, it shows the HDMI port, USB 2.0 port, 2 speakers on either side, sleep button, audio jack, DC in, mini USB and volume control buttons. None of them are a surprise since Rohan had already revealed the specifications, but the placement of speakers on either side instead of being together is the only new info. Rohan argues that having stereo speakers (1watt x 2) on either side will give you 3D (surround?) sound, which I am not really sure till I check it out myself!

The more interesting part comes in the later half when he demos the false digitizer for Blender on Windows! Rohan says that Adam sends touch signals via wi-fi and it does look accurate enough! Count the possibilities of this feature guys!

The back panel is still a mystery and is carefully hidden in this video as well. Errr…

Was this article helpful?
YesNo
TechPP is supported by our audience. We may earn affiliate commissions from buying links on this site.
Read Next
3 Ways to Compress a Video File on Mac
#Hardware #notion ink #notion ink adam #Video