By requiring US Internet service providers, advertising networks, Internet payment gateway providers and search engines to blacklist copyright violators, the pending Stop Online Piracy Act (SOPA) seeks to bring The Pirate Bay and other similar foreign sites into their knees. Met by strong opposition from liberty advocates and internet giants like Google, Facebook and Youtube, SOPA will authorize the Department of Justice to seek court order and require ISPs and search engines to blacklist infringing websites or web pages.

In anticipation to impending government intervention on DNS flow, Mozilla supported an open-source browser extension, DeSOPA, to enable American internet users to automatically connect to foreign DNS servers. Although the recent amendment to SOPA addressed security issues related to domain name server resolution, it still leaves many legitimate websites exposed to undue censorship from ISPs and search engines. Under the proposed bill, a foreign website that received a temporary restraining order from a US court due to copyright violation can be completely blocked by local ISPs even if the court only orders the removal of a particular content hosted on a subdomain. Doing so is expected to reduce compliance cost on the part of local ISPs. 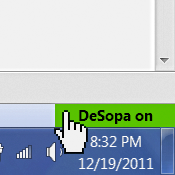 By simply installing this browser extension, online surfers can access pirated content and contested services even if the DNS servers of their local ISPs block them. Just click the DeSopa button and Firefox will send the client request to DNS servers outside the US. DeSopa will cache the IP response of valid servers to resolve future DNS requests faster.

When DeSopa is activated, the address bar of the browser will display the IP address of the website rather than its domain name. The IP address will be visible instead of the domain name even if you click the internal links.

DeSopa is slower at first usage as compared with DNS servers provided by ISPs. DeSopa has to compare responses from three different offshore DNS services. Moreover, this tool will not work for millions of websites hosted on a common server since they share the same IP address.

DeSopa developer Tamer Rizk said that his add-on is a proof that suppressing the flow of Internet via SOPA will not work. In addition to browser workarounds, offshore DNS services will definitely get more lucrative as they serve blocked but popular websites. Others who oppose the bill cite security concerns, arguing that mandatory DNS filtering will prompt American users to choose unsafe foreign DNS services.

Early this year, Mozilla was asked by the Justice Department to drop an add-on that automatically performs DNS workarounds to serve client requests for government-seized domains. Mozilla refused to yield, citing the lack of definite court ruling on the legality of such add-on.

This was a guest post by Bradley Zarich who manages the outsourcing operations of eServe BPO. He writes about wireless gadgets, satellite broadband trends, C-band connectivity and other techie stuffs.

Was this article helpful?
YesNo
TechPP is supported by our audience. We may earn affiliate commissions from buying links on this site.
Read Next
Mozilla Firefox VPN Service Made Available for Android and Windows [Invite only]
#firefox extension #mozilla #SOPA