ARM Cortex A15 will be Five Times Faster and Power Efficient

One of the leading providers of microprocessors has made public, their plans at MWC, regarding their latest model in line: the Cortex A15 MPCore. The first designs of products based on the chip appeared in the fall of 2011, but the appearance of products out on the market is not expected until the end of2012. The company has a long history behind them in developing microprocessors cores.

ARM is a 32-bit reduced instruction set computer (RISC) developed by ARM Holdings. It was first named Acorn RISC Machine, having their first product released in 1985 as ARM 1. The fact that ARM processors have quite simplistic designs made them ideal for low power applications, making ARM one of the dominant forces in both mobile and electronics market. What you should know is that ARM only provides the technological know-how and it is their partner, Qualcomm or Texas Instruments that actually produce the chips. The ARM representative at MWC was kind enough to emphasize that. 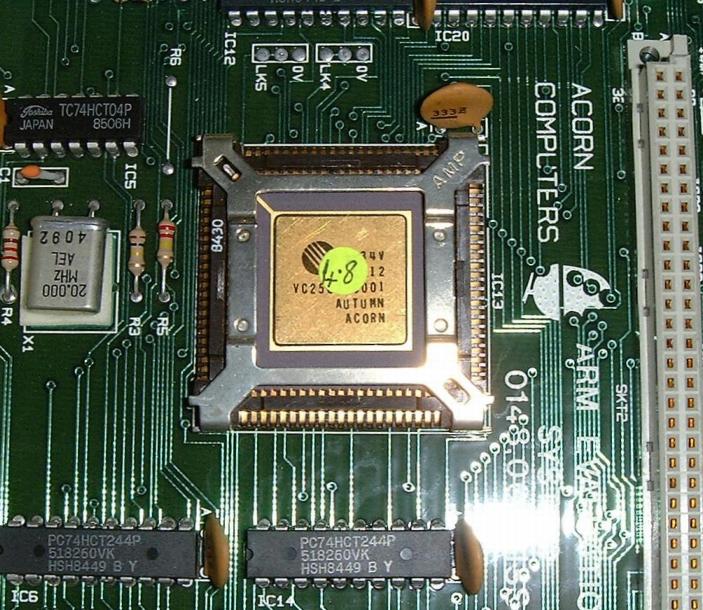 Their first project started in October 1983 saw Acorn and VLSI Technology, Inc working together, their main goal being the achievement of low-latency input/output handling. And on 26 April 1985, VLSI produced the first working ARM silicon. But their first production systems became available only the following year with the release of ARM 2.

The core featured a 32-bit data bus, a 26-bit address space and twenty-seven 32-bit registers. This was probably one of the simplest and most useful microprocessor in the world, having only 30.000 transistors. This was due to the fact that it not had a microcode and didn’t include cache, things that led to low power usage. Next in line we had the ARM 3 core, one that had 4 KB of cache that led to further improved performance.

In the late 80’s, Apple and VLSI started working on a new ARM core, and they released a new version in 1992, called ARM 6. This came in three versions:

The core remained almost at same seizes, the ARM 6 versions having 35.000 transistors. With the ARM 7 TDMI, which had a 3-stage pipeline, they managed to sell hundreds of millions cores.

Their architectures range from the low-range ARM 5 devices to the high-end ARM M-series ones. Even if the ARM 6 cores are used in some cases for the lower-end devices, it is now time for the Cortex processors to provide faster and more power-efficient options. As like its former relatives ARM 9 and ARM 11, the Cortex-A targets application processors, as needed for smartphones. Cortex-R is for real-time applications, while the Cortex-M is for microcontrollers. 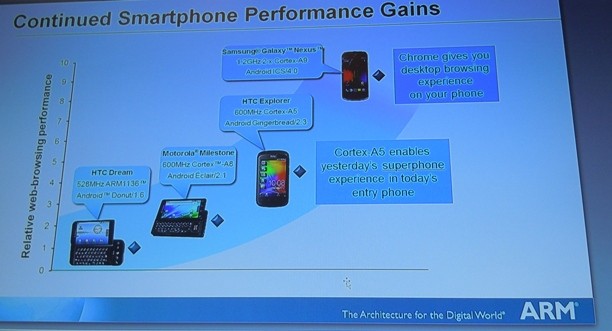 In the case of ARM 9, it has a 32-it RISC architecture, with separate data buses than increased its potential speed. The upgrades from the earlier versions would be easy to spot, as the heat production and the overheating risk decreased. More, the upgrade to a 5-stage pipeline saw the clock speed doubled, and the cores had “Enhanced DSP” instructions incorporated such as a multiply-accumulate.

The ARM 11 was released to public in 2002, and was a 32-bit RISC microprocessor that introduced the ARM 6 architectural additions. It has SIMD instructions that can double the audio digital processing algorithm speed, a physically addressed cache, and a redesigned 8-stages pipeline that supports clock speed of up to 1GHz.

ARM Cortex A15 Comes With Huge Speed and Power Management

The latest of the Cortex-A series of processors, the A15 MPCore will be a multicore processor that provides a superscalar pipeline running at up to 2.5GHz. The unprecedented processing ability combined with the low-power consumption enables compelling products in a wide range of ARM markets. It ensures full application compatibility with all of the Cortex-A series processors and gives immediate access to software ecosystem like Android and Adobe Flash Player (which have made public their recent roadmap and plans). 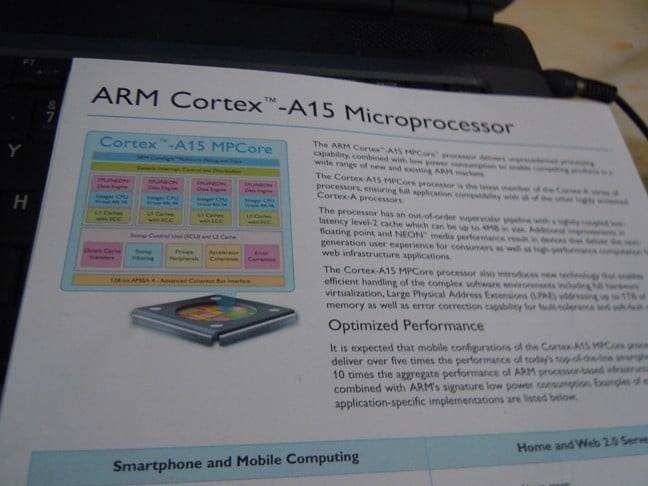 The high-computing performance for web infrastructure applications will be available due to the improvements in floating point and NEON media performance, as well as the 4MB low-latency level-2 cache. The A15 MPCore will deliver over five times the performance of previous versions, and the running at 2.5GHz will enable solutions within shrinking energy and cost budgets.

Some of the key features on the core will be: 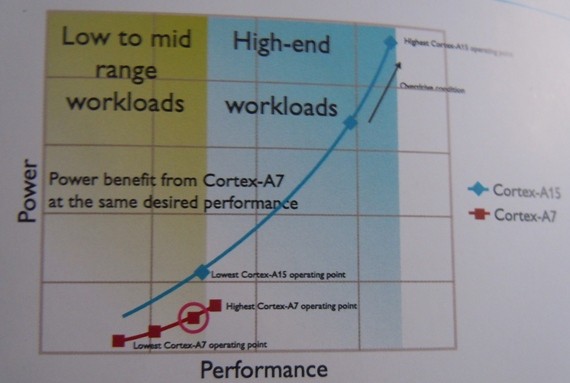 The processor also introduces the ARM technology that enables the efficient handling of the software environments such as support for data management and arbitration, enabling the applications to simultaneously access the system capabilities.

Tight Battle Against Nvidia and Intel

First, we have the guys down at Nvidia. They attacked the market with their new quad-core Tegra 3 processor, bringing PC-class performance levels, better battery life and improved mobile experiences to phones. The processor will bring three times the graphics performance of Tegra 2 and up to 60% less power consumption. Tegra 3 implements a new technology that includes a small-power working CPU. 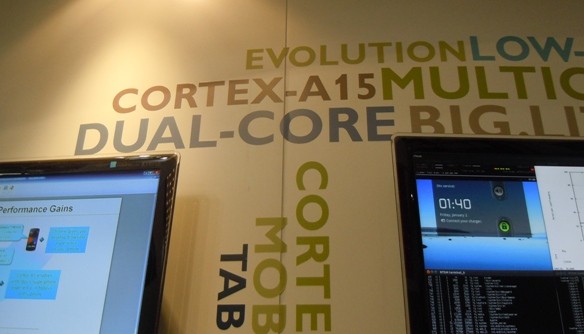 So, when tasks that require less power consumptions are rolling, the four main CPU’s are turned off. The Tegra 3 processor brings to the table the world’s fastest web experience (with accelerated Adobe Flash Player 11, HTML5 and WebGL browsing), fastest applications (blazing performance for multimedia apps) and fastest multitasking (switching between common uses and background tasks). ARM Cortex A15 will have a hard task in order to beat these records.

Intel has Big Plans and Many Partners

On the other hand, we have Intel, the leading developer of chips for servers, desktops, notebook and net-books. Even though AMD poses a threat for them in the core market with their rather lower costs, Intel has a bigger problem on their hands. In the core markets for mobile platforms Intel has really been absent, and now they’ve decided to develop an x86 processor to rival the ARM leaders.

With Apple’s iPhone, Motorola Droid, Google Nexus One and the HTC Incredible all running on ARM processors, Intel introduced the Moorestown processor architecture, providing an SoC comprised of an Intel Atom core, combined with graphics processing, video and memory controller functions. The company promised better performance and richer graphics, with 1080p video playback and 780p HD video recording. More, they say that the processor is capable of two days of audio playback time and five hours of video playback.

Now it all remains to see which of the three companies will gain supremacy in this battle.

[Tech Ad-Ons] iPhone 11 Pro: Efficient, effective...and yet…
Social Networks rise, Shopping falls: How Indians are Using…
Tech advertising in times of Covid-19: Not just about…
Stepping outside in Covid Times? Look at Google Maps before…
Delhi government uses Google Maps to fight hunger in…
[App Blog] "Apple Was Too Scared to Acquire Me": A Crazy…