A survey done by Wakefield Research this month revealed some interesting facts about the majority of US citizens. It would seem that most of them do not understand what “the cloud” is and are confused when this term appears in a conversation. Also, a large number of them claim to have knowledge of what the cloud is when asked in an interview (14%) or in a discussion (56%) and, believe it or not, 17% say that they have faked knowing what the cloud is on a first date!

What is this “Cloud”? 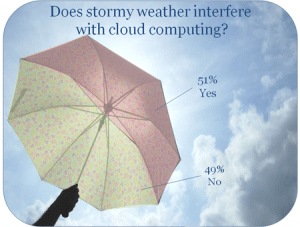 For those who think of “the cloud” as a fluffy white thing floating in the air, well, you are wrong (at least in this context). The cloud actually refers to “cloud computing” and “cloud storage”. This means that the cloud is a vast network of computers and servers located around the world, which hold information and allow access to that information from any device that has an Internet connection. This allows sharing of files, information, storage space and resources over the Internet.

Let’s take a look at the numbers

The survey carried out on 1000 adult americans of age 18 and more paint a disturbing picture: 54% of americans do not know what the cloud is and claim to never have used it. But, from these, 95% use it regularly for online banking, online shopping, social sites such as Facebook or Twitter and online sharing of photos and files. All of these services operate within the cloud, but it would seem that not everyone understands this. Also, another alarming number is that  51% of the surveyed Americans think that stormy weather can interfere with the functionality of the cloud.

Although these numbers are worrying, there is also a “silver lining”. After learning about the cloud and what it is, 68% of americans have acknowledged that it has potential economic value, 35% say that it can help lower costs and 32% think that it can help small businesses grow. Also, in the list of advantages of the cloud, 40% think that it could help them work from home buck naked, or relaxing somewhere while getting their job done via the Internet (33%). Those who are more antisocial think that the cloud is a good thing, because they can share information with people they rather not meet in person (35%).

Many still fear the cloud 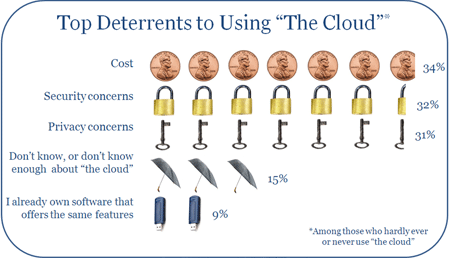 Are these fears real?

As we saw, the three disadvantages of the cloud, as pointed out by the American population are cost, security and privacy. Although they have some realism, these so called “disadvantages” can be worked with. For instance, if the cost of a cloud storage solution is too high, look towards some free alternatives that offer lots of storage space and the possibility to expand.

If you are worried about the security of your cloud account, there are lots you can do to keep your account safer, here is a list of the quickest fixes and the most simple solutions to keep your cloud account safe. If privacy is what keeps you from going in the cloud, keep in mind that these companies try very hard to keep the content of your account secure and away from other eyes. They use complex encryption algorithms to ensure that only you can access your account. Nevertheless, the US government has already made attempts on the privacy of its citizens, and even phone companies collect private information, so this fear is quite understandable.

Although many did not know what the cloud was, the outcome of this survey is still favorable, in the fact that the majority of Americans see the cloud as a good thing and as an advance in economy and technology. As vice president of corporate marketing at Citrix, Kim DeCarlis, pointed out:

“This survey clearly shows that the cloud phenomenon is taking root in our mainstream culture, yet there is still a wide gap between the perceptions and realities of cloud computing. “While significant market changes like this take time, the transition from the PC era to the cloud era is happening at a remarkable pace. The most important takeaway from this survey is that the cloud is viewed favorably by the majority of Americans, and when people learn more about the cloud they understand it can vastly improve the balance between their work and personal lives.”

For the naysayers, here is one hilarious video of a retired Indian government officer explaining Cloud computing (with English subtitles).

[Via] Citrix
Was this article helpful?
YesNo
TechPP is supported by our audience. We may earn affiliate commissions from buying links on this site.
Read Next
10 Best Free Cloud Storage Services for Backups and File Storing
#cloud computing #cloud storage #Internet privacy