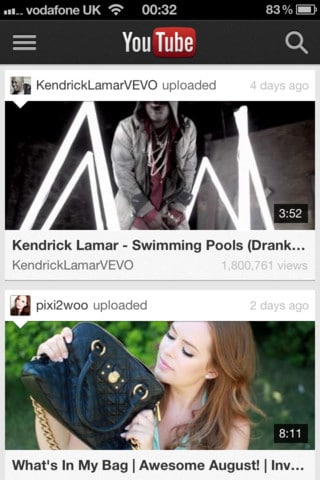 This had to happen sooner than later, but it has happened much sooner than we expected. Google has just released a brand new homegrown YouTube app for iOS, which is available for download on iTunes app store right now. This comes just days after Apple and Google decided to end their 5 year old deal to ship YouTube app with every iOS device released since 2007. This included all models of iPhone till date, all models of iPad, iPod Touch & Apple TV.

When iOS 6 beta 4 was released last month, developers were stunned to see the prominent YouTube app go missing. It wasn’t clear if it was Apple or Google who didn’t want to extend the deal beyond the agreed timeframe. Google used to pay Apple to have YouTube app on all iOS devices shipped from Cupertino, and in addition, it used to miss out on the lucrative ads from YouTube videos. Google has recently added/updated YouTube apps (with ads) on multiple platforms including Sony’s Playstation 3 & Microsoft’s XBox 360.

Moreover the app itself was hardly updated and stayed nearly the same all this while. YouTube on Android has got a lot more interesting updates over the past couple of years. So a dedicated iOS app should come as a big relief for iOS users too, albeit for the annoying ads.

From the iTunes page, below are the listed features-

This looks pretty much the same as the YouTube app on Android, including closed captioning, predictive search, social sharing and others. One thing I do miss in the new YouTube app is the on-screen volume control.

Let’s now wait for the homegrown Google Maps app for iOS. Bring it on Google!

Android Auto for Phone Screens is now Available for Download…
LaraCroft Go and Monument Valley 2 Now Free on Android, iOS
How to Update Play Store App on Android in 2022
Mozilla Firefox VPN Service Made Available for Android and…
Vaccine for 18-44: Get Alerted When COVID-19 Vaccine Doses…
Google Pixel 4 is available on Amazon India, starting from…