This is getting interesting and murkier by the day. After the reports of Microsoft letting users with pirated Windows 7/XP to upgrade to Windows 8, we have come across a major loophole which lets anyone and everyone to upgrade to Windows 8 for just USD 14.99 (or INR 699) by faking the details on the WindowsUpgradeOffer page.

For the uninitiated, the MRP of Windows 8 Pro version is $169.99 and during the promotional offer period, which runs till Jan 31st 2013, Microsoft is offering a big $130 discount to encourage early adaption of the latest Windows OS. So, the existing Windows 7/Vista/XP users can upgrade to Windows 8 for just $39.99 (or INR 1999). Additionally, Microsoft had announced that those who bought a Windows 7 PC between June 2, 2012, and January 31, 2013 are eligible for a further discount and can actually upgrade for a meagre $14.99. Moreover, users get to download the ISO and/or save Windows 8 as bootable USB.

Shockingly, the WindowsUpgradeOffer page requires people to enter some extremely basic details about their Windows 7 PC purchase as shown below. As you can see, the details they ask for can no way be used to validate the purchase. It neither asks for a serial number nor Windows 7 key, but just the PC brand and model! As you can see, we entered some random info into each of the fields. 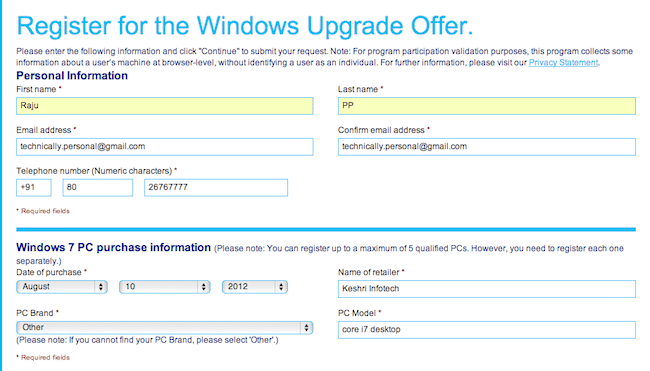 Once the details are submitted, user will get a confirmation email about the registration. Within a few minutes, another email with the promo code is sent to the same email address. This promo code can be used to purchase the Windows 8 Pro edition via the Windows 8 Upgrade assistant app, for a nominal fee of USD 14.99. Unbelievable, isn’t it?

We tried hard to get in touch with Microsoft PR & executives to alert them, but without success. The loophole is already being discussed on forums and blogs now. But seeing the kind of details Microsoft is asking people to get the Windows 8 promo code, we think they’re just desperate to sell as many licenses as possible, even at a loss. In case we get an official statement from Microsoft, we’ll update this post.

Update: Though I didn’t get a direct reply from Microsoft, I was unofficially told by an executive that Microsoft expects the purchase to be legal only if the details entered are genuine. Meanwhile, since yesterday, more and more people have started getting “Registration declined” messages or they are being asked to enter their Windows 7 keys. But, I could personally test that Microsoft hasn’t completely patched the loophole as they randomly let some of the multiple tries (like on different browsers/PCs) go through without verification. It still beats me, how hard it is for them to ask the Windows 7 key for every single case.

Update 2: Looks like Microsoft has finally woken up and has started to compulsorily ask for Windows 7 key.

Was this article helpful?
YesNo
TechPP is supported by our audience. We may earn affiliate commissions from buying links on this site.
Read Next
How to Upgrade from Windows 7 or 8 to Windows 10 for Free in 2020
#windows 8