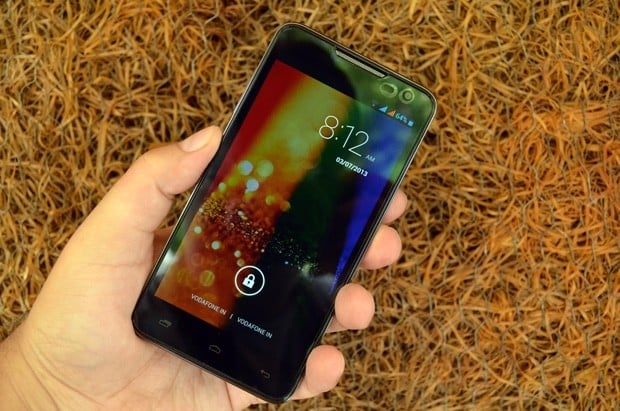 If you’re in the market for a new smartphone and eying a mid-range device, you’re probably in for a roller coaster of a ride when it comes to making a choice. Not only do you have a mind-boggling range of available options, you have to figure out whether to opt for a tried-and-tested brand or lay your hard-earned dough on a relatively lesser known brand that, at least on paper, offers better bang for the buck. And the real quandary is that there are quite a few of them. One that recently caught our attention was the Micromax Canvas HD A116, a handset that, in our opinion, provides very good value for money, keeping in mind its price and performance. The Lava Iris 504q is yet another contender in the same segment, and sports some cool features to boot. In fact, the two are very similar in terms of the core specs, the software and the pricing. But how does the Iris 504q compare and what does it really bring to the table?

Made of plastic and feeling plasticky are two different things, and we’re glad to say that the Iris 504q passed this acid test with flying colors. While it’s definitely encased in plastic, it doesn’t feel plasticky unlike the Micromax Canvas HD or even some higher-end smartphones. Thanks to its soft matte finish at the rear, it not only feels premium, it also feels quite grippy and doesn’t smudge easily. Moreover, the rear is slightly curved inwards, with its thinnest point in the center, and feels comfortable to hold. At just about 8.4mm thick, it’s quite svelte too. 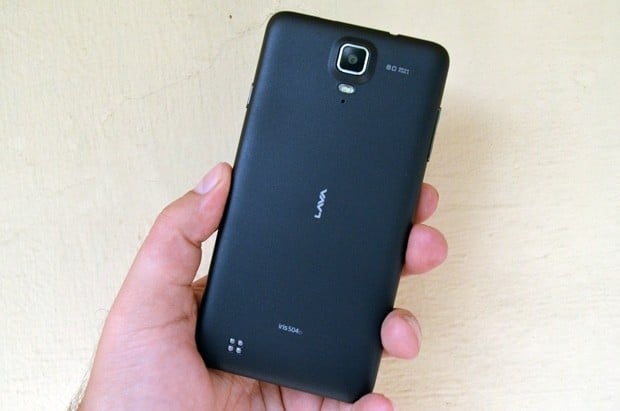 What’s also appreciated is the minimal branding — there’s nothing at all in the front, and only a small logo placed at the rear. Apart from the screen, you’ll also find three capacitive keys placed right below it, and the earpiece with the front camera and sensors on top. A tiny notification LED is hidden on one side of the earpiece grille. A dark metallic strip runs around the sides, and includes a microphone at the bottom and a microUSB port and 3.5mm headset socket on top. The left is where you’ll find the volume rocker, while a power / sleep key is placed on the right — where it’s easy to access with your index finger while holding the device in the most natural position. The rear cover can be pried open to reveal the removable battery and a pair of SIM slots, with a microSD slot in the center.

Overall, the build seems quite sturdy, while in terms of the looks, it looks elegant in a subtle sort of a way, without drawing too many eyeballs. 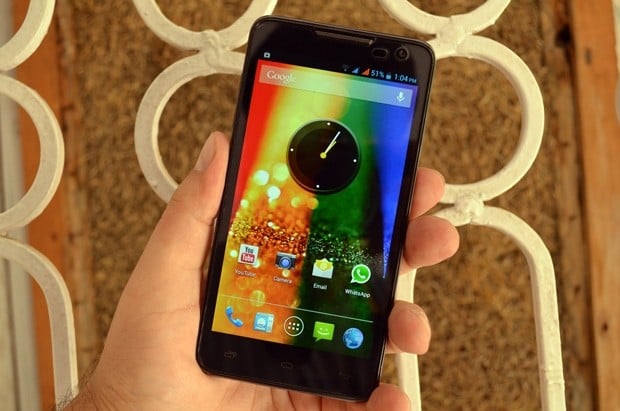 Just like the Canvas HD, the Lava Iris 504q also offers a 5-inch screen with a resolution of 1,280 x 720 pixels. However, the IPS panel provided here features what’s dubbed One Glass Solution (OGS), a technology that uses a single piece of glass as both cover lens and sensor substrate, effectively reducing the thickness and weight of the device. As such, the screen is quite nice… with bright, vibrant colors, and crisp graphics. Contrast levels are good, though it isn’t easily legible in direct sunlight. However, considering its price point, the high resolution is definitely an asset and a big point in its favor. 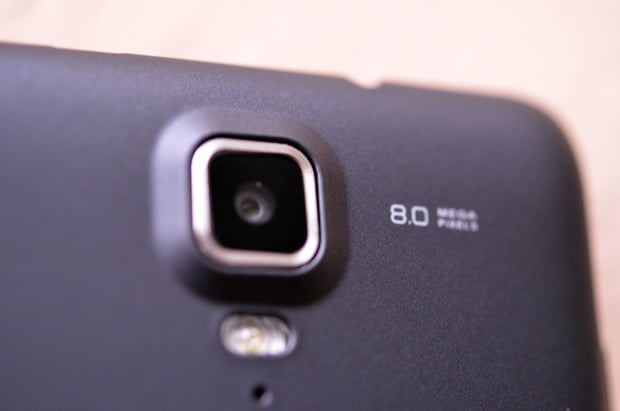 The camera at front is of the 2-megapixel variety and does the needful for self-portraits and video calls, while the main shooter at the back is an 8-megapixel effort that totes a BSI sensor. The UI is basic, and quite similar to what we saw on the Canvas HD. You get an HDR mode, along with the other frills such as panorama mode, smile shot, beauty shot, multi-angle shot and a burst mode as well. The settings allow you to tweak exposure, white balance, and ISO as per your own preferences, and allow access to a range of color effects and scene presets.

Unfortunately, the image quality follows the usual smartphone camera saga we’ve become accustomed to — churning out shots that are reasonably good as long as the available light is good, with the only quibble being lack of detail. Low light shooting isn’t its strong point either, judging from the dark and grainy shots. The shooter can capture full HD video in 3GP format, and again, while it’s usable in daylight, we wouldn’t recommend using it to capture videos at pubs or parties, or wherever there isn’t enough ambient light.

Skins such as HTC’s Sense, Samsung’s TouchWiz and Huawei’s Emotion UI have their own unique features that set them apart. That said, there’s something about stock Android that’s difficult to explain in words — it just feels smoother and zippier in general. And that’s exactly what you get with the Lava Iris 504q. It runs Android version 4.2.1, which has largely been left untouched by the manufacturer. Of course, since this is a dual-SIM device, you get a SIM management utility that lets you name your SIMs and specify the default one to use for calling, messaging and data access. You can also get it to ask you each time you make an outgoing call or send a text message. And while the phone keypad and the SMS compose windows don’t give you discrete options for the two SIMs, you can use the shortcuts that appear in the drop-down notification bar to set the desired SIM. 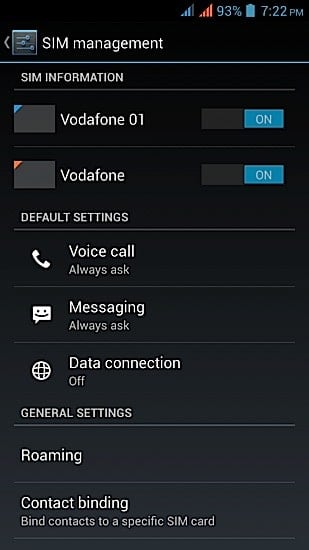 Lava has thrown in a bunch of apps, as if to cover up for the lack of a UI skin. This includes a few Gameloft games such as Modern Combat 2 and Shark Dash, along with MX Player, Fusion Music Player, Hungama, Paytm, Opera Mini and Flipboard. Social junkies will be glad to find Facebook, Twitter and Whatsapp already installed, but we’d still like to choose apps on our own, thank you. On the other hand, it does support theming via an app called Variety Theme, if you’re interested. In effect, all it really does is change the iconography, with other UI elements remaining the same.

Not bad so far, but not too exciting either. However, we still haven’t touched upon one of the handset’s highlights — gesture controls. Taking a cue from the Samsung Galaxy S4, the Iris 504q also boasts gesture controls (dubbed Air-Shuffle) that work mainly for snapping pictures, browsing images in the gallery, and switching music tracks and FM radio stations. You basically wave your hand in front of the proximity sensor for it to work — a cool feature and a neat party trick, but unfortunately nothing more than that. In fact, it becomes a bit of bother whilst using the camera, where you end up clicking pictures inadvertently as you reach out to access the shooting modes available. Thankfully, the Air-Shuffle feature can be disabled individually for the supported apps, but the setting to do so is buried deep under Accessibility settings. 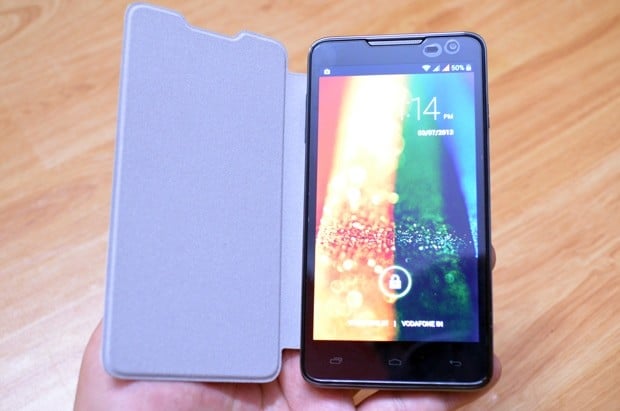 Again drawing parallels with the Micromax Canvas HD, the Iris 504q sports the same basic specs, There’s a quad-core 1.2GHz MediaTek MT6589 processor that powers the show, along with a gig of RAM and a PowerVRSGX544 GPU. Built in storage is limited to 4GB, with just 1.7GB accessible to the user — so you’ll definitely need to use that microSD slot. In such a scenario, its USB On-The-Go support comes in handy, and generously, Lava throws in the required adapter in the sales pack, ready for you to use with your USB flash drives. Other connectivity options just cover the basics, with no support for the likes of DLNA or NFC.

Performance is smooth for the most part and we don’t have any complaints there. Except for the rare hiccup, menu navigation, animations, apps and even multi-tasking functions are handled fairly well as far as day-to-day tasks are concerned. The 2,000 mAh battery packs enough juice to keep it away from the power socket for a day with medium usage… so no surprises, nasty or otherwise, in that department too. 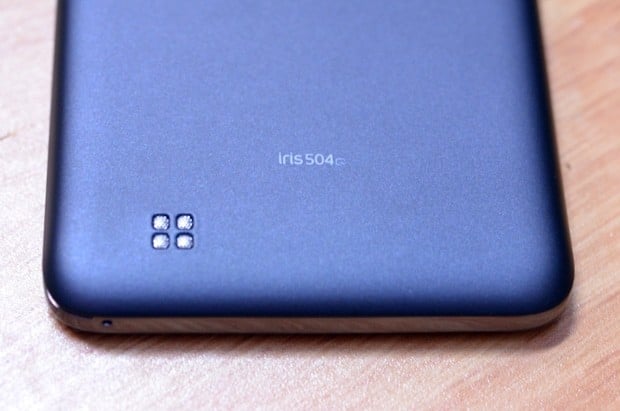 With so many options to choose from, and the available range of smartphones fighting for shelf space, it’s critical for vendors to differentiate their offerings to be able to stand out in the crowd. With the Iris 504q, Lava manages to do so with features such as gesture controls (notwithstanding that most of them are a tad gimmicky), but more importantly, a solid build quality, elegant design, and decent specs that translate into smooth performance. Lava also includes a screen protector and a smart flip cover in the sales pack, handy since you aren’t likely to find too many third-party accessories for it. In fact, our review unit came with a screen protector installed. The flip cover replaces the rear battery cover, and awakens the device from slumber when you flip it open… though you still need to unlock the handset. Interestingly, the flip cover included is white, so you effectively convert the dark gray unit to white when you use the said cover.

For a cost of Rs 13,499 (~ $224), the Iris 504q is definitely good value for money. Competing with the likes of the Karbonn Titanium S5, Gionee E3, Zen Ultrafone 701HD, Samsung Galaxy Grand Quattro and indeed, many others, it takes the Micromax Canvas HD head on. While it’s mostly neck to neck with the latter in terms of the camera quality, performance and battery life, it stands out with the help of the aforementioned gesture controls and it’s better build. With other things remaining the same, it just feels and looks better — and that’s good enough for us.