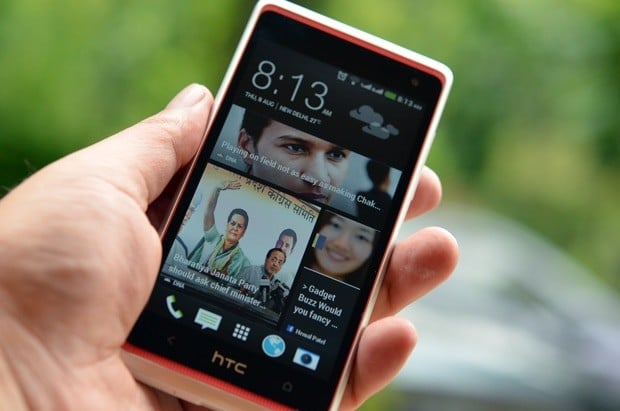 The original HTC Desire, when it came out back in 2010, was a phenomenal device and many, this editor included, fell to its charms. Bearing close resemblance to the HTC-manufactured Nexus One, the Desire was one of the first devices to boast an AMOLED display and enjoyed enviable support from third party developers. In fact, this editor made sure to procure the device from abroad even before the official Indian launch and actively used it for almost a full year — remarkable considering that most smartphones didn’t last more than a few months with him. 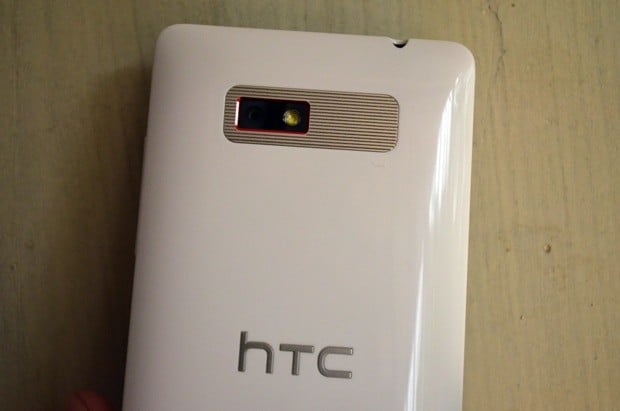 The Desire went on to become one of the most popular smartphones that year, and as is the norm, HTC took advantage of its popularity and came up with quite a few variants, including the Desire HD, Desire Z, Desire C, Desire V, Desire X etc. The company has since moved on to the One as its flagship series, but the Desire legacy carries on with the Desire 600, the latest arrival in the family. This smartphone is positioned in the mid range and brings with it a flair that HTC manages to add to many of its offerings. Its mainstay is the active dual-SIM capabilities that allow simultaneous use of both SIMs. Let’s take a closer look and take it through the grind. 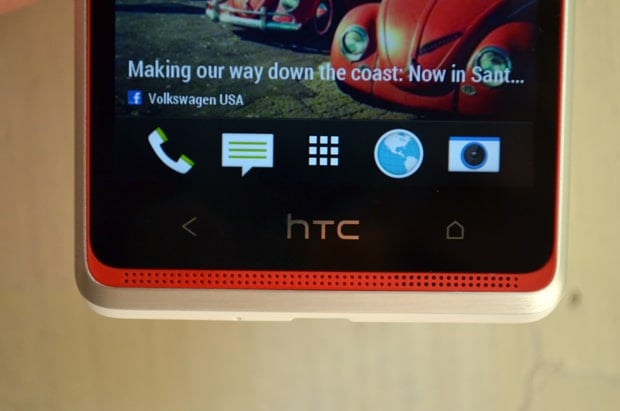 We’ve used the words “a typical touchscreen candybar handset” to describe the design of smartphones in many of our reviews, but that won’t happen in this case. HTC has managed to surprise us yet again with the design on the Desire 600, despite borrowing some elements from the HTC One flagship. While it can’t boast of the same metal unibody goodness as the One, the Desire 600 stands out in a sea of me-too designs with its sweet looks, highlighted more in the white variant we received as our review unit. The plastic back cover is almost like a shell, since it covers about half of the spine, and is painful to pry open. The fascia is livened up by a faux metal band that runs around the sides, and red accents that adorn the front-facing stereo speakers. The latter is a feature that comes straight from the One, of course, and is dubbed BoomSound in HTC speak.

Another trait that it inherits from its accomplished sibling is the control placement. Under the screen you’ll mind just two capacitive keys flanking the HTC logo — a back and a home key. The rear is done up in glossy white and bears HTC branding in the center and a Beats Audio logo closer to the bottom. The main design highlight at the rear is the camera lens and the flash, which are placed inside a rectangular window sporting striped embellishments — something that make the phone look quite distinctive. The port layout and placement of other controls is familiar — the volume rocker on the right, microUSB at the bottom, with the 3.5mm audio socket and the power / sleep key on top. If you’re looking for an IR blaster as found on the HTC One, you’re wasting your time since it isn’t there. Pry the back cover open and the secret for those red accents is revealed — the Desire 600’s innards sport a bright shade of red and even the removable battery boasts of the exact same hue for a matching look. A pair of micro-SIM slots and a microSD slot can be found above the battery and the latter need not be removed to access them. However, the handset will need a reboot if you insert a SIM. The handset’s dimensions and svelte profile make it quite comfortable to hold and despite the plastic exteriors, it doesn’t feel cheap.

It’s to HTC’s credit that it can work wonders by subtly playing around with materials, colors and embellishments to come up with something that pushes the limits of the bog-standard touchscreen design. 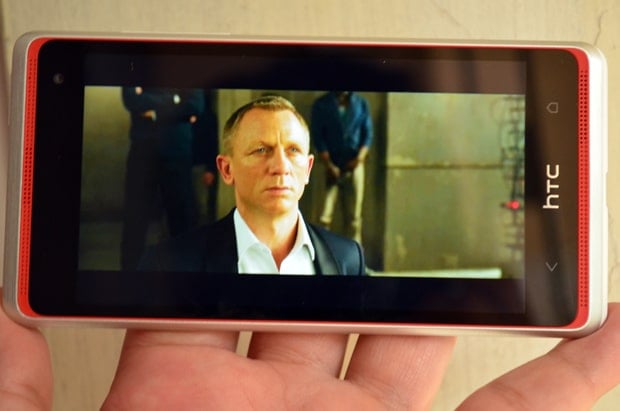 The HTC Desire 600 has been bestowed with a 4.5-inch, Super LCD2 display that comes with a resolution of 540 x 960 and a pixel density of 245 pixels per inch. It isn’t a patch on the HTC One’s full HD display, and we’d have preferred at least a 720p screen on this mid-rage device, but that said, it offers very good color reproduction, sharp text and graphics and decent viewing angles. Sunlight visibility isn’t bad either. 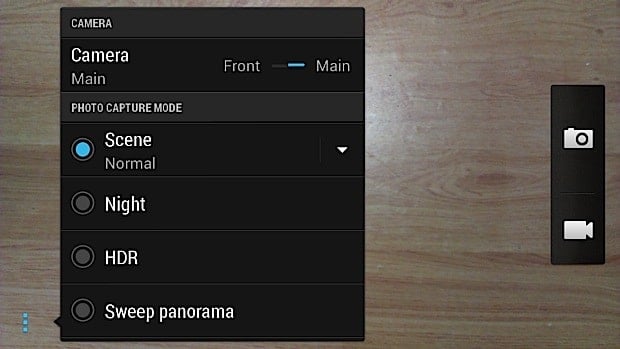 With the One, HTC twisted the smartphone camera war on its head with its UltraPixel snapper — reducing the megapixel count but increasing the size of the pixels themselves so as to improve low light shooting. The Desire 600, alas, doesn’t feature the same UltraPixel goodness and comes with a more conventional 8-megapixel snapper instead. A 1.6-megapixel shooter handles video calling duties at the front. Also missing in action is another headlining feature sported by the One — the Zoe. This doesn’t mean the Desire 600’s shooter is a slouch — HTC’s loaded it up with a fair share of frills including burst, HDR and panorama modes, smile shutter, a slew of scene modes, control over settings such as exposure, white balance and ISO, and filters with real-time preview.

However, the Video Highlight feature is there, letting you create 3-second show reels from your images. Video capture is restricted to 720p. Talking about image quality… the Desire 600’s snapper is certainly up to the task when it comes to capturing usable pictures and videos in good light. The noise levels go up as the ambient light decreases though, so we won’t really entrust it with shooting responsibilities after dark. Let’s just put it this way — you won’t be buying the HTC Desire 600 for its shooting prowess.

When the HTC One landed, it brought with it the latest version of the vendor’s Sense UI (v. 5), along with a new home screen concept dubbed BlinkFeed. While it was running Android 4.1.2 at that time, the One has recently received the 4.2.2 update, which, apart from new Android features such as DayDream etc, also adds quite a few UI improvements such as notification toggles, battery percentage in the status bar etc. However, the Desire 600 is still stuck on Android 4.1.2, and also features Sense 5 and the BlinkFeed home screen that pulls feeds from your social networks and selected news sources and displays them as tiles. 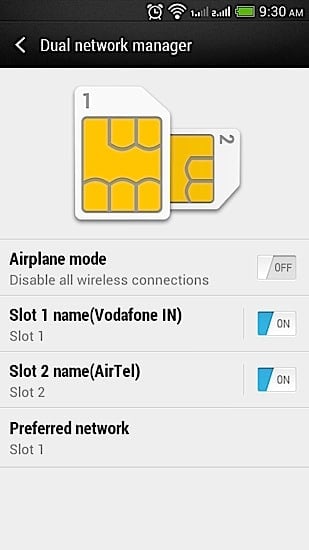 A double tap on the home button brings up the task manager and displays thumbnails of running apps, and you can tap on the desired one to switch or flick them out of the screen to close. A long press on the home button brings up Google Now. We won’t go into too much detail here since the Desire 600 pretty much clones what the HTC One brought with it at launch time software-wise, and you can refer to the software section of our HTC One review for a complete overview. Of course, since the Desire 600 is a dual-SIM device, the software offerings have been changed to take care of this functionality. A dual SIM manager is on hand that lets you toggle either of the SIM cards on or off, and you can also specify internet access points for each separately. Worth noting that 3G is supported only on the primary SIM slot, while the other only supports 2G. The dialer and messaging interfaces have also been tweaked suitably and let you make calls and send messages respectively using either of the two SIM cards. The call log and the message list displays a ‘1’ or a ‘2’ corresponding to each entry as the case may be.

However, after experiencing the software tweaks in the updated HTC One, we’d definitely like to see the Desire 600 with the same improvements as well. As such, the Desire 600 displays an unsightly black bar with a menu button in a few apps, an issue we pointed out in our review of the HTC One. However, this has been taken care of in the aforementioned software update received by the One lately. 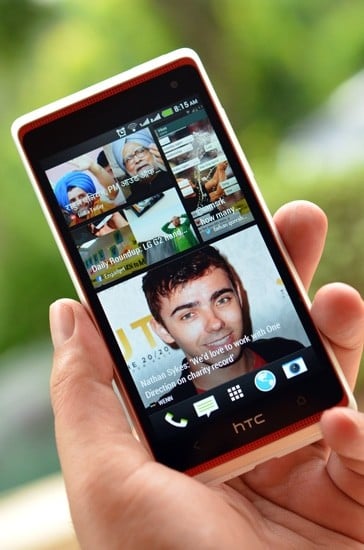 With a quad-core Snapdragon 200 processor clocked at 1.2GHz, 1GB of RAM and an Adreno 203 GPU, you won’t be shouting from the rooftops as far as pure specs are concerned. There’s 8GB of built-in storage, a little over half of which is user accessible. Thank God (or the good guys at HTC) for the microSD card slot and also USB On-the-Go support then. Other connectivity options include A-GPS, Wi-Fi Direct, DLNA and NFC. The mid-range specs reflect in the handset’s performance — while it’s smooth for the most part and the device handles routine tasks well, there’s noticeable lag especially while launching apps. In fact, the phone appears lazy, for want of a better word. It also stutters while playing games, even casual ones such as Subway Surfers, and users who love their mobile games should stay away.

Call quality, on the other hand, is very good, and even though the front facing speakers don’t seem as capable as the ones on the HTC One, they are loud and their performance is satisfactory. What’s also extremely useful, is the active dual-SIM capability which lets you receive calls on one SIM even when there’s an ongoing call on the other. The 1,860 mAh battery can keep the phone alive for just about a workday if your usage isn’t heavy… but if it is then you may need to tank it up for a bit again in the evening, especially if you know you may not be near a power socket — while heading out to the pub or to a dinner for example.

The HTC Desire 600 dual SIM is priced at Rs 26,990 (~ $445) in India, but if you’re in the US, you’re out of luck as it doesn’t seem to be headed stateside anytime soon. The initial launch countries include Russia, Ukraine and the Middle East, and there’s a different variant for China, dubbed the 606w. Spending this amount on a handset with middling specs like those sported by the Desire 600 seems a tad difficult, especially considering the real life performance which isn’t especially exciting either. Also, both the camera and the battery life aren’t really its strong points. 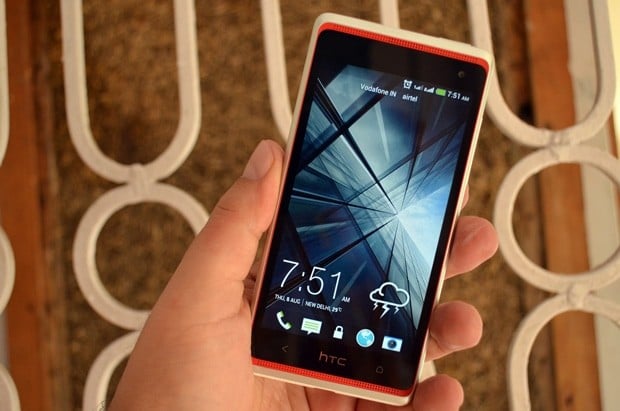 Let’s consider the positives. The design is compelling, and stands out between many others that all look very similar, and despite the plastic chassis, it doesn’t real cheap. The performance may not go through the roof, but regular tasks are handled well and that may be good enough for some. Possibly the most compelling feature is the active dual-SIM capability, and that may bode well for those looking to squeeze the most out of two SIM cards — whether they are executives who’d like to keep their work and personal numbers separate, youngsters looking to make the best of cheap plans for voice and / or data, and just about anyone else who finds carrying two phones a pain, and yet, would want to make use of true dual-SIM functionality. Also, the fact that the device comes from an international vendor of repute and not some no-name local manufacturer might just tilt the scales in its favor. We’d like to think that the Desire 600 dual-SIM could well get a fair share of folks interested, but a price drop would certainly help.