It’s not the first time we turn our attention towards automation, particularly Android automation and how to make your device more suitable for various tasks by giving it the possibility to complete various actions by itself. Android users have a lot of different automation apps at their disposal, just to give a quick example, AutomateIt and Atooma are just two possibilities. What makes Android devices easy to automate is the use of NFC (near field communication), which can act as a trigger if correctly set up.

Automation can be specially useful in some instances, like when driving, since using a phone can be a health hazard (even illegal in most places). Furthermore, if you’re one of those people who constantly needs to make phone calls or use the navigation app to find their way around the city, then  your Android smartphone is your best friend. By automating your phone in the car, you can easily set up all your usual actions, such as opening your navigation app, turn on Bluetooth and connect to your car’s speakers and anything else you want. 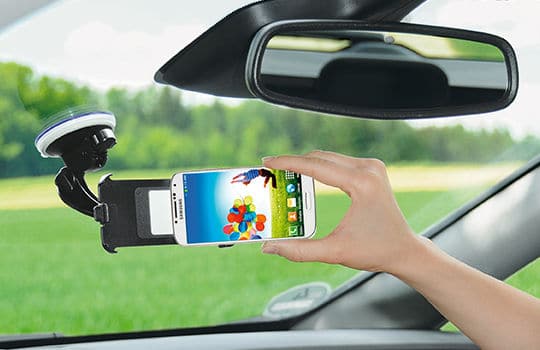 Android automation in the car: How will it help?

If you’re not yet sold on the idea of automating your Android smartphone in the car yet, we’ll give you a few examples of how this process might help you. Imagine this scenario: you walk up to your car, you place your device in the cellphone holder and it automatically knows it’s in the car. The phone proceeds in connecting to the car’s Bluetooth and uses the speakers for turn-by-turn directions or calls. It also opens the navigation app, sets the screen to maximum brightness and turns the volume all the way up. When you arrive at the office and leave the car, it disconnects from the car Bluetooth, turns it off, sets the device to vibrate and the screen brightness to auto.

This is just one example of how you could automate your Android device in the car, and there are many options you can tinker with and create as many actions as you want, so that your smartphone will allow you to focus on the road and have a safe drive.

How to automate your Android smartphone in your car

For automating your Android device in the car, you’ll need some preparation. This shouldn’t take too much if you know your way around your phone. It’s important to know what type of connections your smartphone can make. If you have a NFC-enabled device, then you have the option to use NFC tags to tailor profiles to your needs. On the other hand, if your Android device lacks NFC technology, your other option is to use Bluetooth, but this would require you to keep Bluetooth on at all times.

AutomateIt – Simple enough to be used by pretty much everyone, this Android automation app can be used to create simple triggers which work perfectly in the car. It allows for both Bluetooth and NFC triggers, depending on which technology you wish use and setting everything up takes a few minutes. Also, users can automate their Android device for different environments and if need be, search of pre-configured tasks made by other users.

Atooma – Like AutomateIt, Atooma provides a bunch of features for automating an Android device. The user can set up different triggers and actions easily, thanks to the app’s intuitive user interface. Besides automating your device in the car, Atooma can also help with general purpose automation thanks to its integration with various services and apps. Users who run out of ideas can check what others have created and shared via the “Wall” service.

Trigger  – If you only want to automate your Android smartphone for the car and a few other environment, then Trigger is the app you need. While it doesn’t offer complete integration with other services, like the previous apps do, the tasks it can do work flawlessly. It allows users to set their triggers to NFC, Bluetooth or WiFi, and for premium users, Location, Battery and Time. If you’re interested in car automation for Android, the free version will suit your needs perfectly.

Step 2: Acquire the hardware you wish to use 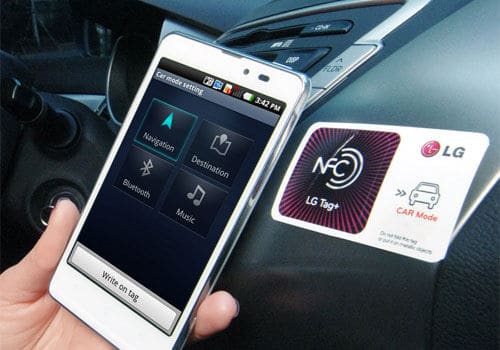 If you’ve decided to automate your Android smartphone by using NFC tags, then you’ll need to purchase them and write on the them the set of instructions for the phone to later read. These tags aren’t too expensive, many packs being under $10. For automating your Android phone in the car and making your system easy to use later on, NFC stickers will be your best choice. These little tags can be placed on your cellphone holder for example and when you get in your car and place the phone there, it’ll read the information on the tag and do the appropriate action.

Some experimenting with different tags and placements will be required in order to iron out all the issues, but once you’ve set up your system, it’ll keep in working for a long time, with no interaction from your part. The placement of the tag is also determined by what you want to do with your phone. If you only use it to receive calls or listen to music, you can set the NFC tag on your dashboard and place the phone on it when you get in your car. It all depends on what tasks you set up your phone to do.

Step 3:  Set up your connection and tasks

Now that you’ve chosen the appropriate app for your automation, and if you’re using NFC, all the tags that you’ll need, it’s time to fire up the app and start configuring the tasks. While the interface might be slightly different, the steps in pretty much all Android automation apps are the same: Select Trigger, Add Action, Save. Once you’ve opened the app, select as your trigger either NFC or Bluetooth, whichever one you prefer and create the context.

If you’re using a Bluetooth trigger, instruct the app that once it’s connected to with the car’s Bluetooth, it should do certain tasks that you set up, like open the navigation app, use the speakers of the car to take calls or anything else you’d like your phone to do on its own. After you’ve created both the trigger and the action, save it and enable it. Keep in mind that in order for this method to work, you’ll need to have your Bluetooth turned on at all times. 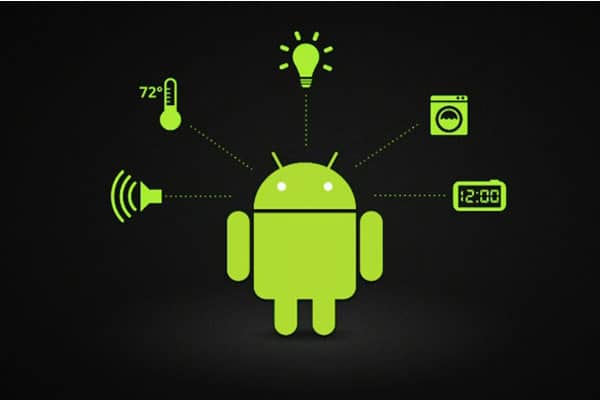 Those of you who have NFC enabled Android device and want to use this technology for car automation, the process is pretty much identical, the only differences being that when you create your trigger, you’ll select NFC and once you’ve created the task, you’ll write it on the NFC tag. The app will ask you to touch the tag on the NFC antenna of your phone (which is on the back of the device) and wait until it has finished transferring the instructions. Once you are done setting everything up, stick your NFC tag in your car, where you usually keep your phone and the next time you go for a ride, put the phone on top of the tag and the actions you’ve set up will start.

Was this article helpful?
YesNo
TechPP is supported by our audience. We may earn affiliate commissions from buying links on this site.
Read Next
10 Best Drawing Apps for Android [2023]: Paint & Draw Like a Pro
#android apps #automation #cars