Airtel, India’s biggest mobile network operator will soon roll out 4G LTE support for supported handsets across the country. We’ve been testing out the service on an iPhone 5s here in Bangalore over the past week or so, and here’s a brief review of our experience with Airtel’s 4G LTE network. 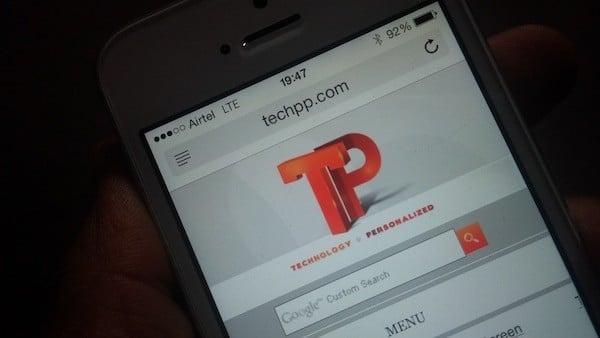 To be clear, Airtel launched the data-only 4G LTE service in India back in April 2012, but it’s only now that they’re bringing voice support. Unlike most of the American and European countries, the commercial supported 4G band is the 2300MHz, popularly known as TD-LTE 40. China and India are the only two major countries where TD-LTE is supported for commercial use. Apple was the first major handset company to support this LTE band on their devices late last year with the launch of iPhone 5s and iPhone 5c. Airtel had previously collaborated with Huawei to launch a 4G LTE handset in India, but it never saw the light.

iPhone 5s and 5c launch must have pushed Airtel to get their act right with regards to 4G LTE support on handsets. Back in October last year, Airtel acquired 100% stake in Qualcomm’s 4G network in India which had access in Indian telecom circles of Mumbai, Delhi, Haryana and Kerala.

Airtel insists that deploying 2300 MHz TD-LTE has been a huge challenge. This particular band is deployed in just 20 countries or so and hence lacks ecosystem support, device choices and network scale. More importantly, the band is weaker in offering in-building coverage compared to other modes of LTE.

So Airtel is aiming to provide consistent experience rather than flaky high speeds. In fact, during the press conference last week, the Airtel executives deliberately ignored requests to quote the speeds we can expect from their 4G LTE service. It’s true that the best advantage of 4G LTE over 3G is the low ping rates, while max speeds achieved is only secondary.

Having said that, it’s tough for a carrier to convince end users about ignoring the speed tests. Over the past week, people have been asking us to share the speed test results. The iPhone 5s handsets provided by Airtel were demo units, and hence we couldn’t install the Speed Test app. Of course we didn’t stop there and tried to test by tethering the phone’s 4G data to PC. Below are the screenshots. 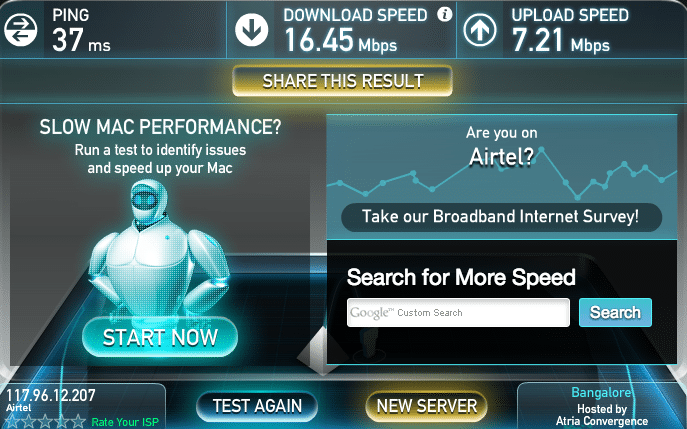 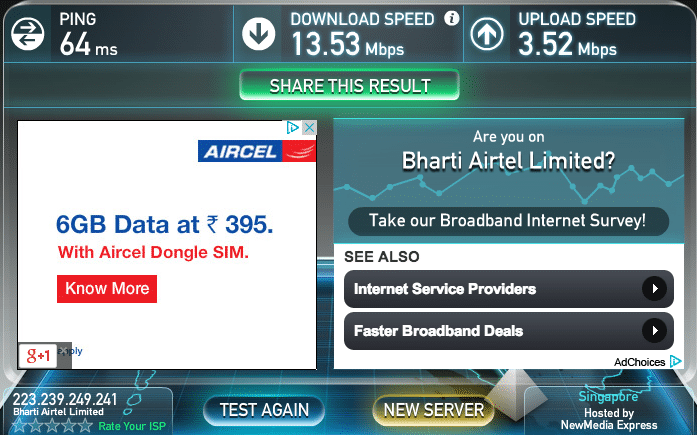 As you can see, those are some impressive stats, specially the ping values. Considering that the ping rates increase when tested over tethering, the actual values should be even lesser.

Ever since we announced that we’re testing the 4G LTE on iPhone 5s, many existing 4G USB dongle users were quick to point out that Airtel throttles the 4G LTE speed, which in most cases maxes out at 10 Mbps. This is in line with what Airtel executives told us as well, when they said they try to provide uniform experience to all users rather than letting some people with good coverage to exploit the speeds.

We did couple of download tests (via tethering again) to test the speed consistency of Airtel’s 4G LTE connection. First, we tried downloading a 883MB ISO file from Ubuntu, which was completed in 8 minutes and 3 seconds. The download speed was near consistent, and ranged from 15.2 Mbps to 18.4 Mbps. Then we tried to download a much bigger file, this time, the openSUSE linux distro. The 4.3GB file was downloaded in less than 33 minutes, which was again very impressive. For those who care, the download tests were carried out inside our home office where the LTE coverage was hovering around -100dB.

The overall experience with using Airtel’s 4G LTE on the iPhone 5s was good. We traveled across South Bangalore and saw that the LTE coverage was good in most places except few. It’s a known limitation that TD-LTE (2300MHz) has issues with coverage inside buildings, and that was obvious in our tests as well. Considering most people will be using the 4G LTE on the move, that’s not a major issue. But the best part of using 4G LTE on iPhone was extremely fast and near flawless YouTube streaming. For someone who’s so used to see that ‘buffering’ message even on 420p videos, it was awesome to drag around the loading bar on Full HD (1080p) videos without seeing any lag.

There’s no advantage when it comes to voice calls though. Airtel is still using the CSFB (circuit switched fallback) technology, and not VoLTE (Voice over LTE). This means, the phone switches back to 3G (or 2G) when making voice calls. VoLTE has considerable advantages over CSFB, with features like High Definition voice and HD Video calls. For now, there is no difference when it comes to voice calls and SMS on Airtel’s 4G LTE.

In our limited testing, there was no considerable difference in battery consumption. It was very pleasurable to experience near instant page loads and high speed video scrubbing, but then, there must be only a handful of 4G LTE users testing here in Bangalore. Providing a consistent experience will remain a challenge for Airtel, and they insist that they’re working to improve the coverage as well. Right now, only iPhone 5s and iPhone 5c are the supported handsets, but there have been reports of Airtel partnering with local brands like XOLO to bring affordable 4G handsets to the Indian market. We are yet to hear about the Airtel 4G LTE data plans and availability. But be sure to check back as we update you about Airtel’s launch plans for 4G LTE in India.