Legal minds at Hollywood should be working overtime to address their latest nightmare – Popcorn Time. This new open source software from some innovative developers from Argentina lets you stream and watch movies while torrenting them in the background. This is as seamless and easy as watching a movie over Netflix. No wonder, some people are calling this Netflix for pirates. 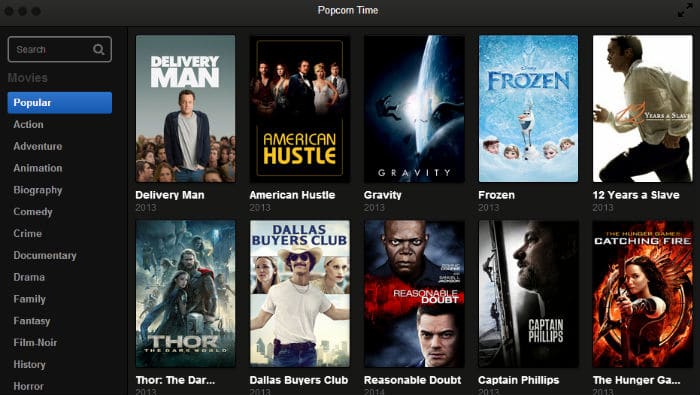 Popcorn Time lets you watch the movie while you seed and leech the torrent in the background. So one need not sit and wait for the torrent to download completely to watch the movie. The developers are relying on YTS, a popular source for movie torrents for the Popcorn Time’s database of movies. As you can see in the screenshot above, the app has listed some of the latest movies like American Hustle, Gravity, Frozen and many others.

The developers acknowledge that the app can be deemed illegal for most parts, but play safe by citing contradicting laws regarding copyrights and distribution in various countries

Is it Legal? Depends on where you’re from, really. Once again: we’re using torrents, so if you really care, you’d better google what the legal situation around these protocol is where you live.

Popcorn Time is currently in beta, and is available for OS X, Windows and Linux. It automatically streams the movie in HD or best available version (with subtitles if needed), and there are no usage restrictions whatsoever. But then, they have an interesting take on handling the downloaded movie file. The file will be moved to a secret folder on your computer, which will be deleted automatically once you restart your PC.

Though most of the movie torrents are clearly illegal, torrenting by itself isn’t. We absolutely love the technology which is powering Popcorn Time, and we hope the brains at Hollywood and elsewhere will adapt and use this to their favor, rather than going all guns blazing to yank the service at the earliest. The developers though aren’t expecting to be sued as they don’t host anything, and none of the developers makes any money. There are no ads, no premium accounts, and no subscription fees. If you live somewhere where movie torrenting isn’t legal, try out Popcorn Time right away, else, you can use it to stream movies from this legal movie torrent database.

Update: As expected, Popcorn Time has been taken down by the developer owing to legal pressure.

Update 2: YTS, the BitTorrent site has resurrected Popcorn Time, and the beta builds are available here.

Songs.pk Returns with a Bitcoin Miner Script in Tow
Read Next

Free Video Conferencing: Google, Microsoft and others to…
Latest ColorOS Update Brings Ads in System Apps on Realme 1…
What is DNS over HTTPS and how to enable it on all browsers?
Oblivious DNS over HTTPS (ODoH): an attempt to improve DNS…
Is the era of flagship phones over?
Has Redmi handed over Realme-bashing to Poco?