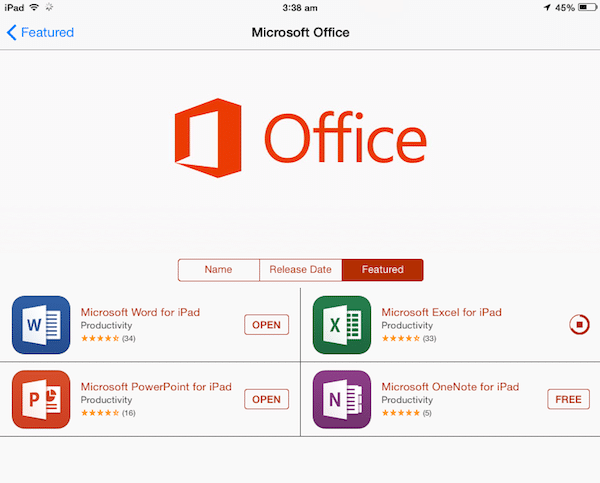 For some people, the release of Microsoft’s MS Office suite on the iPad removes the last barrier that stood between a tablet and productivity. Yes, there have been mobile office suites around for more than a decade now, but for many, it ain’t Office unless it comes from Redmond. Well, the iPad now has MS Office. The suite comes in the form of three apps that can be downloaded separately – MS Word, MS Excel and MS PowerPoint. Each tips the scales at 200 MB plus and if all you intend to do with them is ogle documents, share them and cut and paste content from them, then they are free as well. Want to step into the land of creating new files and editing existing ones? Ah, you will then have to part with money for a monthly or annual Office365 registration – Home Premium stands at USD 9.99 for a month, although there is a USD 6.99 plan on the way too. Nope, there is no “pay once and use for life option” out here, but more on that later.

We could dedicate reams and reams (or should that be ‘screens and screens’) of text on each app here, but we are going to choose to be succinct here. Whatever you accuse the big M of, it certainly cannot be saving on features. No, we will not be so naive as to say that we expected a carbon copy of the Windows version of MS Office on our iPads, but in terms of features and functions, Messrs Word, Excel and PowerPoint do deliver a fair bit of productivity bang. 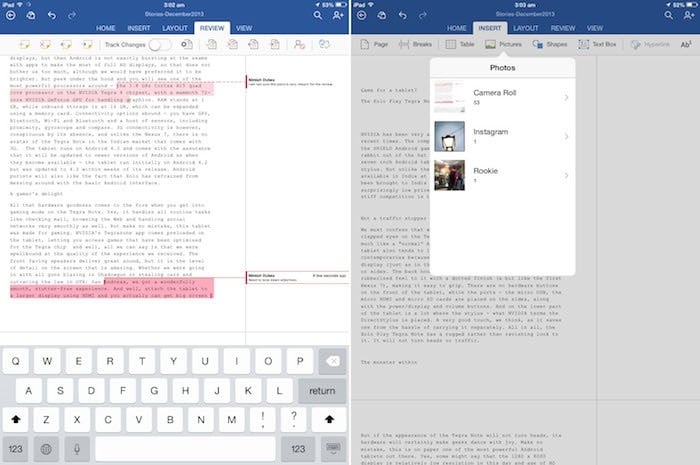 Word is likely to be the most used of the apps here, and it comes stacked with spell spell check, word count, templates, loads of formatting options and praise be, the option to mark revisions and add comments, making it as close to an editor’s tool on the iPad as we have seen. 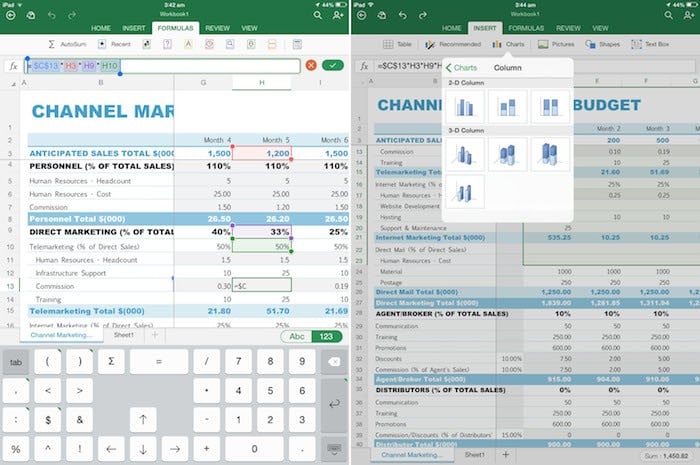 Excel comes with supports for charts and formulas, and most interestingly, with a special keyboard that let’s you mess around with formulas and functions. PowerPoint comes with a slew of templates and the option to insert images in your presentation. 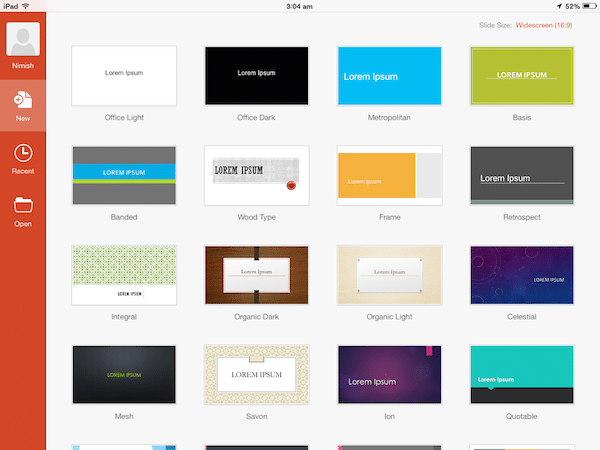 Yes, some might complain that they do not get a grammar check, but honestly, these are very decent applications for those who love to juggle documents, spreadsheets and presentations on their iPads. And all three apps are all well-designed, look a lot less cluttered than their Windows counterparts, and oh, the irony, are much more touch-friendly than MS Office on Windows 8 devices. Best of all, the compatibility with MS Office files created on desktops or notebooks is outstanding – we got heavily formatted documents which hardly any loss of formatting, barring he odd case of font unavailability.

The big question, of course, is whether all this will make MS Office the office suite favourite for iPad users? A year ago, our answer would have been a resounding and unequivocal yes. Today, however, it must be tempered by the fact that Apple has started offering its own iWorks suite of apps free with new iPads. And they are very formidable in terms of both features and design. There are also free alternatives like Google Drive and QuickOffice around and you will see people wondering whether it is worth paying a monthly or annual sum for an office suite? Finally, there is the lure of alternative office suites like Documents to Go, which give you a lifetime of ownership for a lower one-time payment. We definitely can see those who use MS Office heavily on their computers leap at the opportunity of being able to see their files with almost all their formatting intact on their tablets and well, those who store their files online on OneDrive will love the app too, but the biggest challenge the new office suite faces is to convert those who have already downloaded and are using alternative office suites on their iPads. Unless one is functioning in an environment where there is extensive exchange of documents and files and lots of commenting and editing, we honestly cannot see too many abandon Apple’s snazzy combination of Pages, Numbers and KeyPoint for MS Office. And while Google Drive is a much plainer affair, those accustomed to it might not want to wander too far from it. Finally, we cannot see too many people being comfortable with a monthly subscription when other developers are offering suites for a one-time payment. 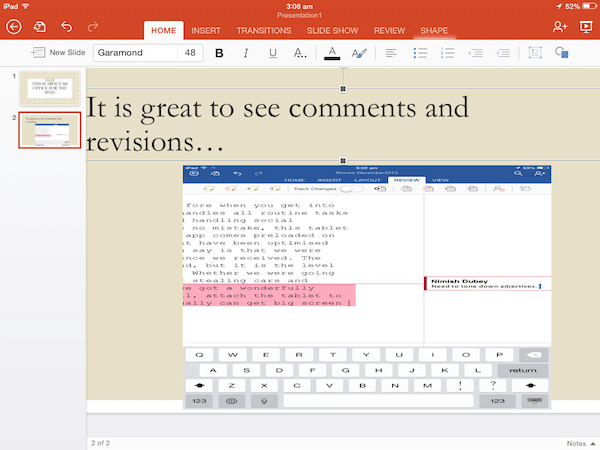 All of which brings us to the biggest problem with MS Office for iPad: timing. Four years ago, this could have been the app that would have silenced those who claimed that tablets had no productive side to them and were best for viewing data. Today, it is one of many such apps, most of which have had a headstart over it. That said, we do think it is worth downloading for all those who work extensively with MS Office and want a similar interface and editing options wherever they go. And honestly, if you do have an Office365 subscription, you would be a fool not to download this suite. But if you have been addicted to alternatives – and four years can build some very stubborn appy addictions – MS Office for the iPad does not give you any compelling reason to switch as of now. Methinks Microsoft needs to look at those subscription rates and indeed the entire model as such if it wants to attract mainstream users rather than enterprise ones. Still, all said and done, one cannot welcome the arrival of THE office suite on THE tablet. And before you ask, yes, this piece was written using MS Word on an iPad mini. Now, who was it who said tablets could not be used for productivity?

Was this article helpful?
YesNo
TechPP is supported by our audience. We may earn affiliate commissions from buying links on this site.
Read Next
10 Ways to Fix Photos App Not Working in Windows 11 [2022]
#daily app #ipad #microsoft #MS office