When we think of must-have gadgets nowadays, we tend to think of the word “smart”. We have smartphones, smart computers, washing machines, TVs, refrigerators and many others. However, the idea of having a smart light bulb in our houses is a pretty new one in the technological field. While companies like Belkin and Lumen have something of a smart light bulb, they’re still small brands that don’t attract the attention of so many people as Philips does. The biggest competitor at the moment is the Philips Hue Bulb, but two other players in this game cannot be easily ignored. We’re talking about LG and Samsung.

The light bulb from Philips was the first one to start this fashion, but it looks like it won’t be the only one on the market. Since 2012, when Philips started working on the idea of smart lighting, and it came up with the Hue collection, it became more and more popular. The SmartBulb by Samsung and the SmartLamp by LG are promising to offer even more. Let’s take a look at what each one of them has to offer! 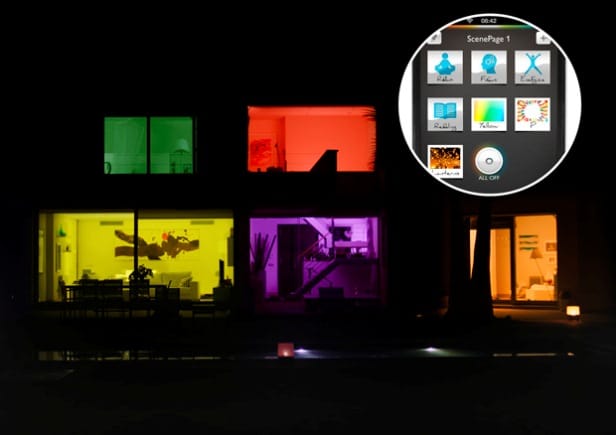 Although there are some obvious similarities between the three types of light bulbs, there’s always something that differentiates one from the other. In the case of the Philips bulb, the maximum output is 600 lumen, while the bulb type is LED. When it comes to its lifetime, this one can be used for up to 15,000 hours.

Apart from allowing users to switch the light on and off using an application, the Hue from Philips also comes with a color range from 4000K to 6500K. The pack costs $199, and it includes 3 light bulbs, a bridge and the app. These are 8.5-watt bulbs, and the bridge acts as a connector between the bulbs and the application, as it is linked to your wireless modem. This way, you can connect a maximum of 50 bulbs to the bridge at the same time.

The wireless LED bulbs can be switched from white to any color you wish, while they can also dim, flash, and pulse. These are available in E26/E27, BR30 and GU10 formats. In order to be able to use this technology, though, you should have a smartphone using either iOS or Android. The requirements Ios v4.3 or higher and Android v2.3 or a newer version.

Coming with a 2-years warranty, the Hue Pack can be used on iPhone, 3GS, 4 and 4S, as well as 5, while it’s also been tested on iPad Mini and iPad 1st to 4th generation. In case you own an iPod Touch, you can use the app on that one, too, as long as it belongs to the 3rd, 4th or 5th generation. If you’re an Android user, you should know that the app is suitable for Galaxy S2/S3, Note/Note2, the tablet, Galaxy Ace 2, Sony Xperia S, Google Nexus 7 and HTC One X.

Thanks to hue, you can choose the light of a specific room depending on your activity – there is a setting for concentrating, one for relaxing, one for reading, as well as one for energizing. Similarly, you can simply use a picture of your own to pick the color you’d like the light bulb to use – it can turn the room into a romantic place, it can help you fall asleep, or wake up in the morning. By setting up an alarm at a certain time, the lights can be automatically turned on to wake you up – the color is your choice.

Being a very smart light bulb, Hue can also let you know when you received mail, or what the weather is going to be like before you go out – for example, it will turn blue before you go out in case it’s going to rain, so you know you should take an umbrella with you. In case you’re looking for security, you can set the lights to be on when you’re not at home, or function as an alarm, and turn on the minute someone walks into the house. This way, you know if someone unwelcome is trying to get into your house. 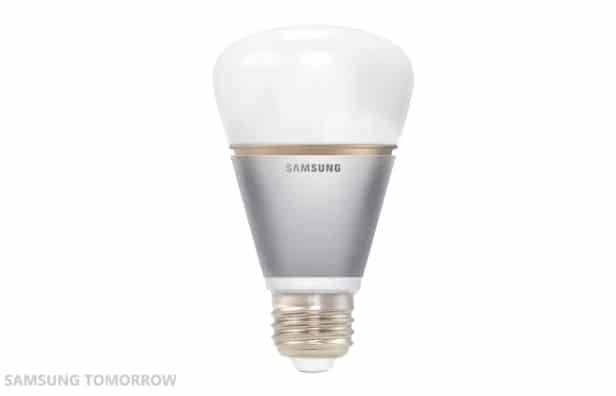 Unlike the Wi-Fi-based version from Philips, the SmartBulb from Samsung uses Bluetooth only. In terms of similarities with the previously discussed light bulb, this one also has a maximum output of 600 lumen and uses the same bulb type – LED. The lifetime in case of Samsung is the same – 15,000 hours, although the range of colors goes from 2700k to 6500k.

Trying to come up with something new, Samsung offers to control up to 64 bulbs at the same time. However, apart from the smartphone app, you will also need a ZigBee Bluetooth Hub in order to automate the lighting. The bad part of the story is that this one isn’t going to be included in the pack you’ll buy from the company.

The SmartBulb was launched during the Linght + Building 2014 – one of the most important trade fairs for architecture and technology – that took place in Frankfurt, Germany – 30th of March to 4th of April. According to newspapers from all over the world, the presentation was a real success, and we’re waiting for an official website to introduce the smart LEDs, as well.

The bulbs can be dimmed to 10% in order to create a nice atmosphere, and they also come in the shape of a tube. The tube version is available at 600mm, 1200mm and 1500mm so it can fit mostly anywhere, depending on your preference. The application also suits both iOS and Android devices, although there’s no word yet about the exact requirements.

While the Samsung Pack is known to include the light bulbs and the instructions for installing the app, there is no additional information available at the moment to tell us if any additional connector will be included. Also, the SmartBulb doesn’t seem to have any of the interesting features we noticed in the case of Philips – i.e. functioning as an alarm, setting colors depending on activity, etc. 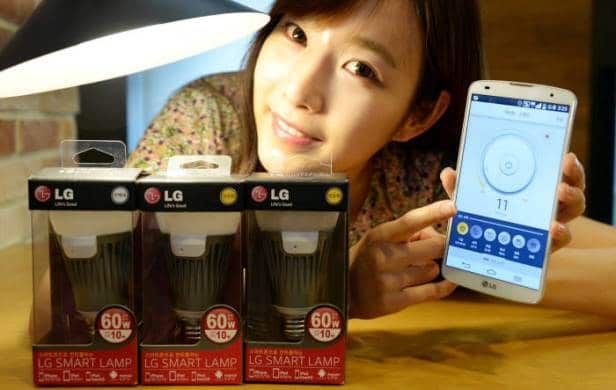 Similar to the SmartBulb from Samsung, this one doesn’t do too many special tricks, either. It does, however, enable users to turn the lights on and off using the smartphone application, while it doesn’t say how many bulbs you could control at the same time.

The bulb type they’re using is also LED, and the lifetime is the same as it is for the other two competitors – 15,000 hours, which means something around 10 years. On the bright side, the SmartLamp has some features that remind of the Hue Bulb from Philips – it has a security mode that flickers the lights at random moments when you’re not at home.

In addition to that, it also comes with a “Party Mode” that will make the lights flicker in a similar way to the rhythm of the music playing on your smartphone. However, you won’t be able to use the same settings with music coming from another player.

Coming from Koreans, the app corresponding to the Smart Lamp is suitable for devices running on iOS, but it can also be used by those who own Android phones or tablets. There is no information available at the moment regarding the precise requirements in terms of operating system, though.

While the price for only one light bulb is announced to be around $32, we know for now that the official launch will take place in Korea. Although the pack will probably spread quite quickly around the world, there is no news about it being available in the United States of Europe anytime soon.

In the case of LG, the led connects with the app through both Wi-Fi and Bluetooth, while the light bulbs’ capacity is of 10 Watts. These bulbs are known to be 80% more efficient than the 8.5 ones that are still being used by Philips. To see how this app is able to control the SmartLamp, watch the Youtube video below.

Was this article helpful?
YesNo
TechPP is supported by our audience. We may earn affiliate commissions from buying links on this site.
Read Next
Samsung Galaxy Fold 4 Tips and Tricks: Get the Most Out of Your Phone
#LG #Philips #samsung