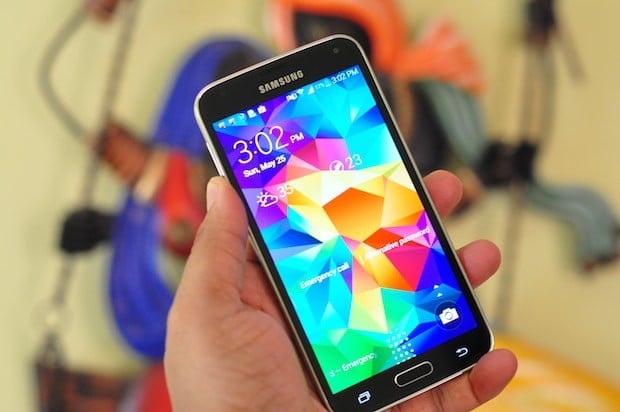 Success can be a tricky thing to handle. Of course, everyone hankers for it, but once you do get it, following it up can be a tough proposition. And that, we think, is what Samsung is discovering with the Galaxy S series of devices. The first Galaxy S made waves because of its excellent hardware and superb display – one could say that it was the first device that really made the most of the AMOLED display. The SII followed in its footsteps, but also witnessed the first rumblings about ‘plasticky’ construction (there were numerous pictures of how think the back panel was, although we did not find too much wrong with that). These picked up volume with the SIII and the S4, both of which boasted top of the line hardware, but kept getting criticized for not looking the part of a high-end device. And now comes the Galaxy S5, and we suspect that those complaints are likely to continue.

Right, we need to get this out of the way – if you were expecting a totally reworked design on the Galaxy S5, then you will have to prepare yourself for a spot of disappointment. For, notwithstanding a dotted back cover (still of plastic, before ye ask), Samsung does not deviate from the tried and trusted design formula in the S5. The elongated oval home button (although flanked by a “recent apps” button rather than a menu one), the chrome strip, the light sensors above the display are all there in their usual places. 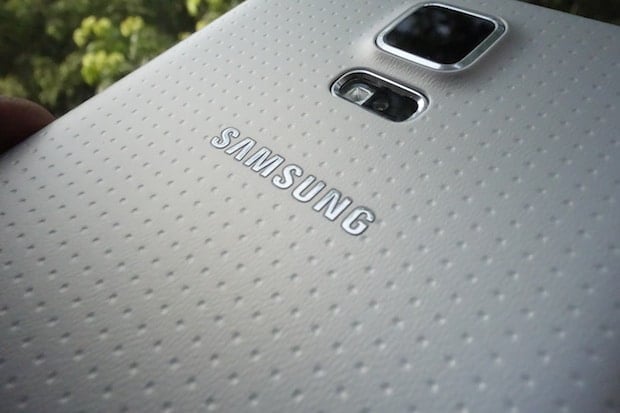 That said, one has to confess that the phone still feels reassuringly solid to hold and in spite of a slight bump up in size and weight (it is even slightly thicker than the S4 at 8.1 mm)(, will fit into most male hands without too much discomfort. A point to note are the covered ports on the side – this phone is water and dust-resistant, as long as you keep those ports tightly shut. And yes, the back cover remains removable – a trait that is becoming increasingly rare in these days of unibody builds. But will the S5 turn heads? We are going to be catty and say, not unless it is in the hands of someone gorgeous! Cue more criticism for Samsung on this front!

But barring perhaps the first Galaxy S and the SII, the S series has preferred to let its innards rather than its looks do the talking. And they speak as loud as ever in the S5. The display remains one of the most brilliant we have seen on a smartphone, Super AMOLED at its best, even though it does tend to oversaturate colours. And at 5.1 inches, it is the biggest we have seen in a Galaxy S series device, although as we have stated before, the phone itself never seems too bulky. It remains a full HD affair and very visible even in sunlight. Delve below the display and you get an octa-core Exynos processor (that’s the model released in India), backed up by 2 GB RAM and 16 GB of onboard storage that can be expanded using a memory card. 4G is conspicuous by its absence in the connectivity options but that apart, you are unlikely to want for anything in that department – NFC, Bluetooth, Wi-Fi, Infra-red, they all are here. The camera has been given a megapixel bump too and now stands at 16.0-megapixels, and ah yes, we left a twist in the hardware tale for the last – next to the flash accompanying that camera is a heartbeat sensor! 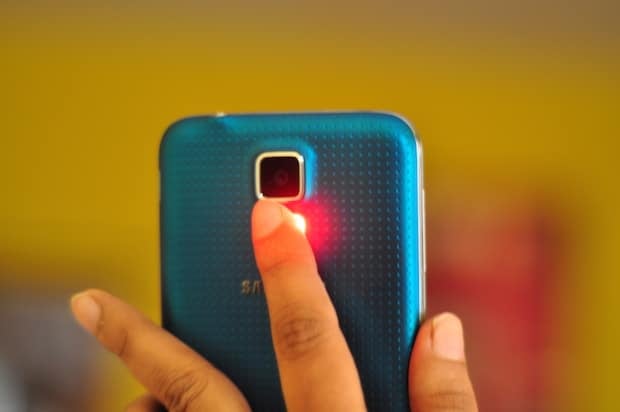 In terms of software, we once again have the joys of TouchWiz parked over the latest edition of Android, KitKat (4.4.2). And we got two firmware updates even as we were reviewing the device. TouchWiz generates extreme reactions in general – you can either get amazed at the number of options you get, or feel utterly irritated by them. The notification bar for instance, if summoned by a dual finger pull down, will show you more than twenty shortcuts and options! Smart Stay and Smart Pause which pause a page when you look away from it are very much present and then there is Multi Window which lets you run two apps next to each other on the same screen, and yes, we do need to put in a mention of the Toolbox panel which floats above all apps and gives you quick access to apps of your choice. 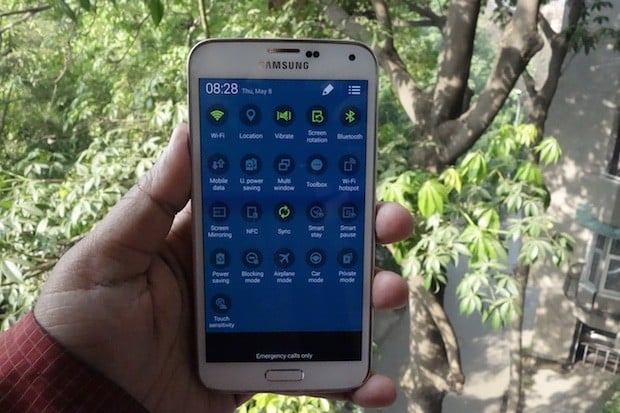 Finally, you can unlock the phone using a fingerprint scanner option – you need to swipe from the lower part of the display towards the home button. It’s sort of neat, but in terms of consistency, is unlikely to give the iPhone 5s sleepless nights (Comparison of Fingerprint sensor technologies). Speaking for ourselves, we might have got a bit spoiled by the likes of the Moto X and the Nexus, but we wonder if TouchWiz is becoming more of a liability than an asset for Samsung. There are clear lags that occur in the photo gallery and when you switch to image editing mode in the default apps, which do not occur in others. And well, that settings menu with a number of tabs is about as friendly as a DOS interface. Perhaps TouchWiz needs a revamp, just as HTC’s Sense did a few years ago. As it stands, it actually increases the learning curve of the device.

Tarzan like performance too, with a snappy snapper to boot 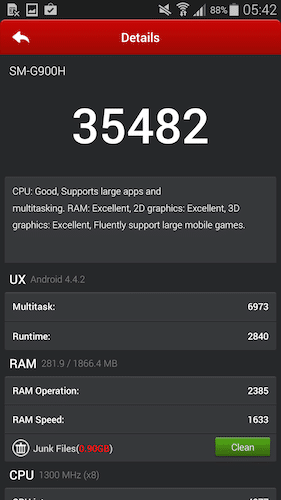 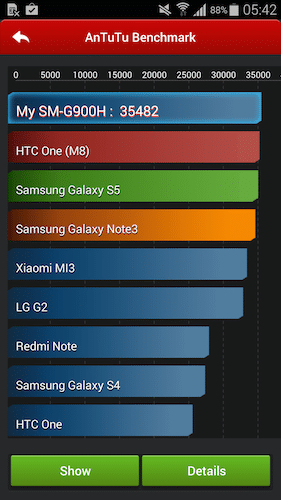 We could just sit back and quote benchmarks at you, but stuff the numbers, the stark fact is that in terms of performance, the S5 matches pretty much anything that we have seen running Android, and that includes the highly acclaimed LG G2 and Android’s own flagship, the Nexus 5. High-definition games like Asphalt 8 and Shadowgun played beautifully with zero frame rate drops – even when we kept switching from one to the other. While on the task of switching, multi-tasking works great on this phone – no matter how many tabs you keep open or apps you run (we tried a dozen of each), the phone keeps purring over smoothly. For some reason, Samsung continues to launch the Exynos version for their flagships here in India, which is kind of disappointing. Although it doesn’t seemingly suffer in comparison to the global variant carrying Qualcomm’s Snapdragon 801, Indian customers still have something to feel sad about.

A big surprise is the battery life – we pushed the device for all it was worth on the social networking, photography and gaming fronts and still got through a day very comfortably on a single charge. Yes, there is a Power Saving mode too, but we never needed to use it in our week and a half with the device. Sound, however, is a bit of a mixed bag, on loudspeaker mode – decent in volume but not with the greatest clarity we have seen. And while the display did pick up a scratch or two, the phone was not affected by a dunk or two in water!

You note that we have not spoken about the camera. Well, that’s because we thought it merited a section of its own. While the Galaxy S series has always boasted good shooters, we think that the 16.0-megapixel on the S5 is the first one that can actually go toe to toe against most of the other phone cameras out there (barring the Lumia 1020, which we insist is a camera disguised as a phone) and come out with head held high. 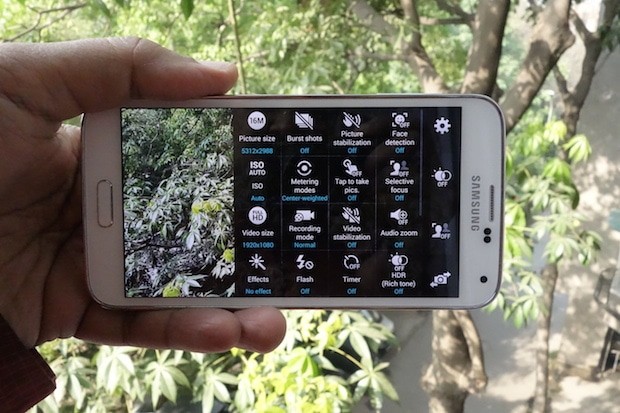 Details and colours were very well captured and even low light performance was impressive. We compared the S5’s camera with those of the Xperia Z2, the One (M8), the iPhone 5s and the Lumia 1520 recently and it compared very favourably with those worthies. There are a number of shooting options out there – trust TouchWiz to crowd that menu up too – but we think that the S5 scores heavily in simple point and shoot mode, the one preferred by most cellphone photographers. Samsung has a contender here, Paulie! 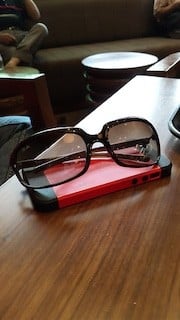 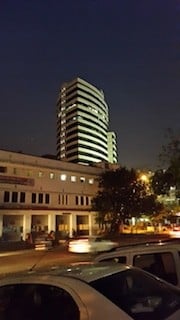 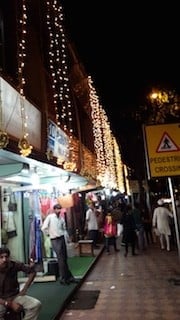 Conclusion: To buy or not to buy?

The Samsung Galaxy S5 is officially retailing in India for Rs 51,500 (Around USD 880-885), but is already being sold at lower prices by some retailers (like Amazon and Flipkart) – some going all the way down to Rs 39,990 (About USD 685-90). At the former price, it might seem very expensive as it comes very close to what one shells out for the likes of an iPhone 5s and more than what the HTC One (M8) and the Xperia Z2 command in the Indian market. At the latter, however, it is a formidable proposition. 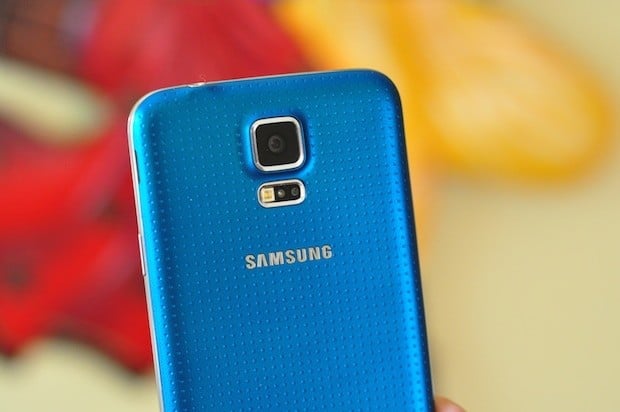 That apart, if all that you seek is a high-end Android device with a very good display and camera, then the Galaxy S5 is very much a frontrunner – its display remains in a zone of its own, its hardware is magnificent and now even the camera is a strength. The only significant areas in which its rivals can hope to trip it up are in design and UI, both of which are beginning to show signs of ageing (and we suspect that is why HTC and Sony are focusing so much on the design of their flagships). But heck, if you believe that beauty is only skin deep, and you are a believer in Android, then close your eyes and grab the S5. Android has a new flagbearer, wethinks.

Redmi Note 9 Review: No Pro, No Max, Just Plain Performance!
8 Best Google Meet Tips and Tricks to Use it Like a Pro
Vivo S1 Review: It’s got the looks, but needs more
Samsung Galaxy A72 Review: Actually, the Samsung Galaxy A52…
Samsung Galaxy Tab S6, Galaxy Watch 4G, and Galaxy Watch…
[First cut] Redmi 8A: Them A+ Looks!