Xiaomi has announced that the company’s budget Android smartphone, the Redmi 1S, will go on sale in India at just Rs.5999 (less than $100), which is Rs.1000 lesser than what they had announced back in July. The phone will be sold exclusively on Flipkart from September 2nd, and registrations will start today, August 26th from 6pm onwards.

This means, that Xiaomi India will be following the same flash sale model which has come to a lot of criticism over the past few weeks with people finding it tough to get their hands on the Mi 3 smartphone, which is going out of stock within seconds every week. 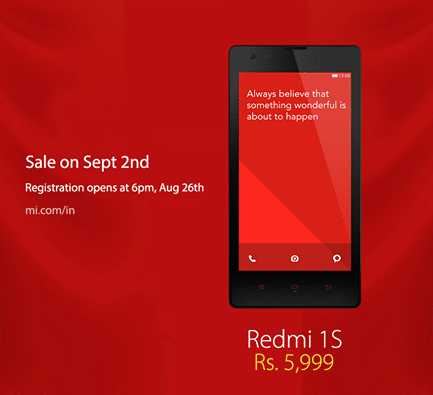 The Redmi 1S (also known as Hongmi 1S) comes with a 1.6GHz quad core Snapdragon 400 processor, 1GB of RAM, 8GB of internal storage (with expandable microSD slot), 4.7 inch HD (720p) display, dual SIM connectivity and 8MP Auto-focus camera. Instead of Corning Gorilla Glass, Redmi 1S carries a Dragon Trail glass which seems pretty resistive to scratches. At its price range, it easily beats every other smartphone in terms of specifications. If we have to nitpick, the Redmi 1S will be running the Android 4.3 Jelly Bean, and not KitKat.

With brief hands on we got at the launch event yesterday, we were pleasantly surprised by the build quality and user experience of the phone at large. The screen is sharp and clear, and stands a notch about anything we have seen in this price segment. The Redmi 1S will face a stiff competition from the likes of Asus Zenfone 4, Moto E and Micromax Canvas Unite, but the aggressive pricing should help its cause.