Apple has put an end to all the rumors and hearsay surrounding the release date of its upcoming next-generation iPads. Apple has sent out press invites announcing an event entitled ‘it’s been too long‘ for October 16th at the Town Hall auditorium on its Infinite Loop Campus in Cupertino, California. 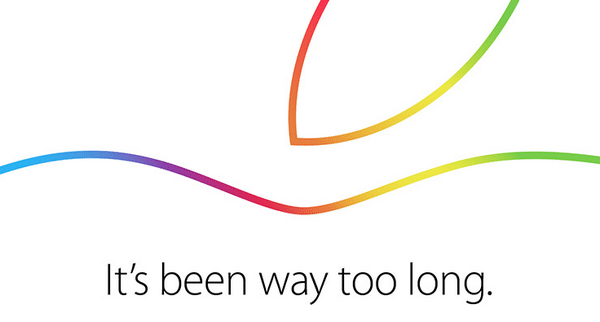 Invitations to select members of the media and special guests indicate that the event will begin at 10 AM Pacific time/1 PM Eastern Time. As for the specs and features of the upcoming iPad Air 2, we’ve recently shared with you a story compiling pretty much all there is to know about it.

At the launch event, Apple is expected to debut updates to its iPad and Mac lines. As always, the new versions of the iPad Air and the iPad mini will be slightly thinner, will featre a more efficient and faster A8 processor, a new M8 chip from the iPhone 6, Touch ID, enhanced camera features, an improved screen design, and  gold color option. The new iPad Mini could maintain the tradition and will borrow some of the Air’s new features.

Apple could also announce that Yosemite is going to be released for free on the Mac App Store on the day of the event. A new iMac and a 12-inch MacBook with Retina displays are on the cards as the latest novel products to come from Apple’s labs. The Mac mini could also get upgraded.

Besides the above, Apple is expected to talk a lot aboit Apple Pay, the new split-screen multitasking mode for the new iPads, updated iWork and iLife apps for OS X Yosemite, and the redesigned iTunes 12 app for the Mac. Some new details on the 2015 Apple Watch could be shared, as well.

Was this article helpful?
YesNo
TechPP is supported by our audience. We may earn affiliate commissions from buying links on this site.
Read Next
Best Places to Buy Refurbished MacBook or Mac [2023]
#apple #ipad