Jolla is another rising star in the tech world, having recently expanded its smartphone sales into more countries across the world, India included as well. Jolla’s Sailfish OS is considered by many as a direct successor to Nokia and Intel’s MeeGo and the N9 mobile phone, but only its software is based on the open-sourced components of MeeGo. And now it seems that the company is ready to start the production of their very first tablet.

And it seems that the ties between Nokia and Jolla are still strong, since Jolla is also based in Finland; and the independent company has decided to announce its plans for making a tablet at the same Slush event where Nokia has announced yesterday its N1 Android tablet.

Jolla doesn’t have enough financial power to build the tablet on its own and that’s why the company has decided to crowdfund its first tablet. For the few fans of the company, this is great news, since they will be able to get the device at a cheaper price than the retail version. You can buy the Sailfish OS-powered tablet for just $199, but by the looks of it, it will quickly sell out. At the time of writing this, the company has managed to gather more than $250,000 from their initial goal of $380,000, with 21 days still left to go. 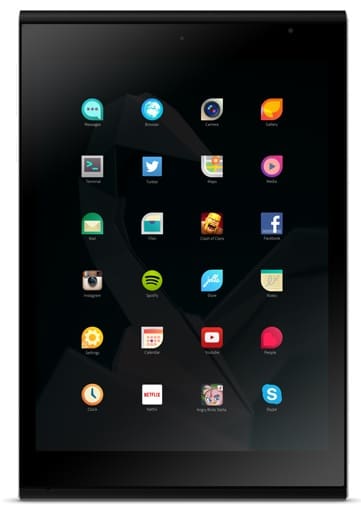 This product reminds the Ubuntu Edge idea, but now I realize that the $32 million they were hoping to achieve was just too much. Jolla has a more realistic target that it will reach very soon. Jolla said that if it’s crowdfunding campaign succeeds, then it looks to start shipping the tablet next June. The available regions, for now, are EU, Norway, Switzerland, USA, India, China, Hong Kong and Russia.

The Jolla Tablet features a 7.9-inch screen with a resolution of 2048 x 1563. The device is powered by a 1.8GHz 64-bit quad-core Intel processor, comes with a 32GB of storage, has 2GB of RAM and a 5MP rear camera. Judging by its size, we can see that this is another take on the iPad Mini and even on the ‘sister’ company Nokia. While there aren’t too many Sailfish-specific apps available, just like the phone, Jolla’s tablet will be compatible with Android apps.

However, it’s important to highlight that the Jolla Tablet won’t have access to the Google Play store, as users will get Android apps running by using third party app stores like Apptoid or the Amazon app store.

But it is the software that makes Jolla’s product stand apart from the rest. Visually and functionally, it’s quite different from Android or iOS as navigation is based mostly around swipes. Jolla COO Marc Dillon says that this helps with multitasking, once you get used to it. In a recent interview with TechCrunch, he said the following:

It’s difficult at the moment to find a good tablet that is not the Apple experience. And even that is very single task oriented… Apple took the tablet and made it something that was useful to people but still it’s very limited. I think we can take it to the next level.

Jolla is also inviting users to share their ideas on the upcoming tablet on the official together.jolla.com forum. Users can suggest new features and, who knows, maybe they will make their way into the slate. On the crowdfunding page, Jolla is comparing its product with the iPad Mini 3, the Nokia N1 and the Nexus 9. You can also check out our previous comparison article where we put head to head the same devices.

Update: Jolla Tablet has blasted past the funding goal of $380,000 within two hours of the project going live on Indiegogo and at the time of writing this piece, it has raised over $585,000.

Was this article helpful?
YesNo
TechPP is supported by our audience. We may earn affiliate commissions from buying links on this site.
#Jolla