Mention “style” and “fashion” with reference to phones and the geek squad will start wondering if you are thinking about the iPhone, the Moto Razr or the Galaxy Alpha. But go and ask the same question of the “swish squad” and it is a fair chance that their thoughts will turn to devices laden with crystals, bearing a touch of gold and smelling of handcrafted leather. And if a bit of bling is your thing and your wallet hath no bottom to it, then perhaps you should be looking at devices like the Tonino Lamborghini 88 Tauri. 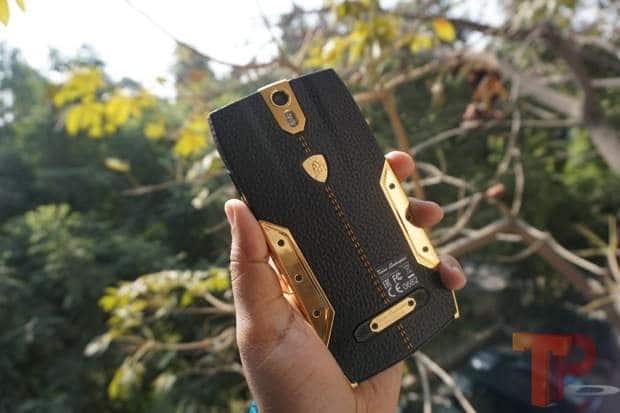 Yes, we said ‘Lamborghini’ and we did not mean a car. For, the 88 Tauri is actually a phone that has been inspired by Lamborghini’s famous car lines. We have seen geekdom and autodom collide in the past – there was a Ferrari edition of the Moto Razr 2, and Lamborghini also had a tie-up with Asus for some devices. But most of those endeavours were about a logo here, a flash of colour there and so on. The Tonino Lamborghini 88 Tauri? Oh aye, it is a phone, but it will yank your eyeballs out of your sockets like few devices have.

For, let’s get this out of the system: this is a BIG phone, and is pretty much proud of it. It will not fit into your coat or trouser pocket, but that is because it was not meant to be concealed in the nether regions of your wardrobe. Nay, this is a phone that screams: look at me. And look at it you will – you don’t get sights like this too often in the phone world. 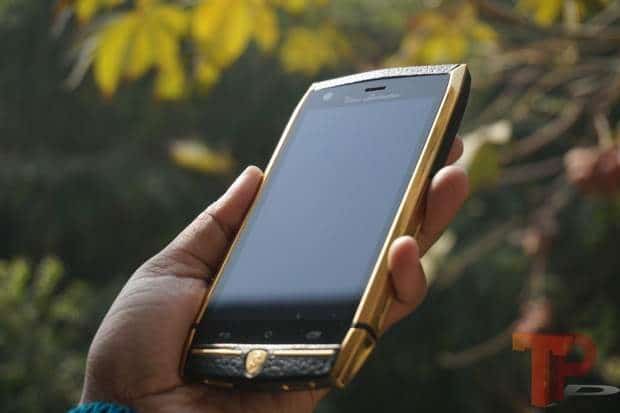 The model we got an eyeful of was the black and gold one (it is available in five colours), and well, it was big and black and replete with gold plating all over it. We don’t have the exact dimensions of it but then we do not think that anyone is going to be looking at those while buying it. It is 158 mm long, 80 mm wide and 13.6 mm thick. Speaking roughly, it is about as long as the iPhone 6 Plus, slightly wider, and well, it seems almost twice as thick. Oh and it is easily the heaviest phone with a 5.0-inch display we have used at 250 grammes. But it feels so utterly reassuring solid.

Whether it looks good or not is entirely a matter of taste. The fans of minimalism might wince at the sheer amount of glitter that hits your eyes when you see it, but there are fashionistas who will drool over it. The iconic Lamborghini “raging bull” logo is studded below the 5.0-inch full HD display, which incidentally is the same glass that is used in the Lamborghini cars and yes, it is scratch resistant and shatterproof. There is gold plating all around the display, sliding gently away to the sides, which are a mix of metal and high-quality leather.The SIM card and memory card slots are revealed by doors that open on solid metallic hinges and the rubbery plastic ones that one sees in other handsets.

The back is again a mix of gold plating and leather, with a 20.0-megapixel camera (hooray, we mentioned a tech spec finally) on the top with a dual LED flash beneath it, followed by the Lamborghini logo stud and gold stitching right through the centre of the back, all the way to the base which has a metal plate with two speaker grilles on either side with the words ‘Tonino Lamborghini” written on it. You can see metal plates of the sides screwed on to the leather back – very industrial some might say but we can see people loving it too.

And well beneath all that leather and gold plating are some respectable tech specs – the display is a full HD one, the phone runs Android KitKat 4.4 and is powered by a quad core Qualcomm Snapdragon 801 processor, has 3GB RAM, dual SUM connectivity, 4G support, a 20.0-megapixel camera at the back, an 8.0-megapixel camera in front, 64 GB of storage , which can be expanded using a memory card, a 3400 mAh battery…but why go on? Let’s be honest, the Tonino Lamborghini 88 Tauri is one of those rare phones on which people will spend a bomb without even looking at its spec sheet, eminently respectable though it may be.

And it is very exclusive too. Each phone has been assembled by hand and well, there are going to be only 1947 units of each colour available because that was the year of birth of Tonino Lamborghini. It comes with special ringtones designed for it by DJ Lavine.

Yours for Six Thousand Dollars. Not for all wallets, really. But definitely for all eyes. Heck, that is what super luxury phones are meant to be, right?

[metaslider id=59730]
Was this article helpful?
YesNo
TechPP is supported by our audience. We may earn affiliate commissions from buying links on this site.
#Luxury Smartphones #Tonino Lamborghini 88 Tauri