WhatsApp Voice Calling Will Soon Roll out to iPhone Users

Back in the beginning of the previous month, we reported about the fact that WhatsApp was starting to roll out its much-awaited voice calling feature. At the moment it is available only for a few Android users, but we’re now hearing news that there is work being done behind the curtains to bring the feature to iPhone owners, as well. 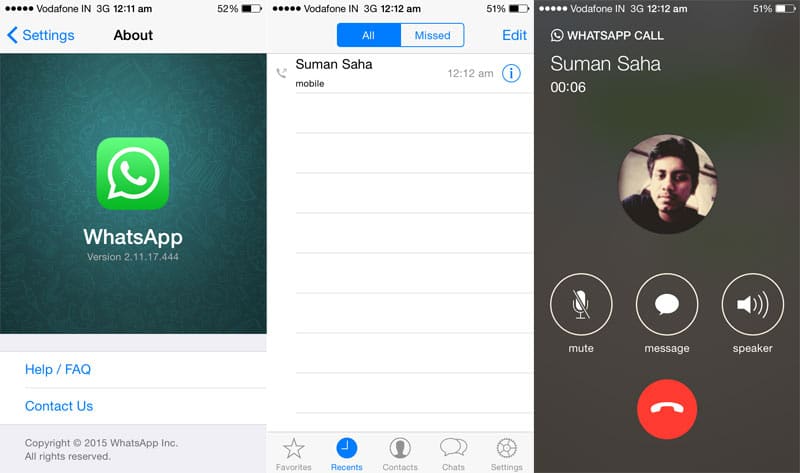 A couple of leaked screenshots have been published by BGR.in, claiming to show a jailbroken iPhone running the WhatsApp v2.11.17.444 beta app. The picture reveals the user interface of the WhatsApp voice calling feature on iOS. The screenshots represent a design that’s pretty much in-line with the interface that is available for Android users.

At the moment, the feature is currently only available in the beta version of the app. Once it rolls out to iPhone users, they will notice a phone icon beside a contact’s display picture. Thus, by hitting the button, the calling screen will appear, along with the ‘mute’, ‘message’ and ‘speaker’ options.

At the bottom of the screen you will also find a new “recent” button which will show the call history including calls you made, received and the ones you missed. The feature is currently in beta, which means it will soon become officially available in the public version, as well. This will put further pressure on carriers, as more mobile users turn to VOIP apps in order to save money on traditional voice plans.

6 Best Reddit Apps for iPhone and iPad in 2022
Read Next
Source: BGR

How to Roll-Back to Windows 10 from Windows 11
Jio-FB Deal: Is a WhatsApp Phone Coming Soon?
WhatsApp Payments: UPI-based payments service starts rolling…
Apple Homepod is Soon Launching in India for Rs 19,900…
We will soon start with local production of OnePlus TVs:…
How to get water out of iPhone and make it functional again