WhatsApp Calling Finally Comes to iPhone, Rolling out in Phases

It’s not often that iOS users have to wait for a new app or a new app feature for this long, but WhatsApp made them wait for over two months, and has finally rolled out the much awaited Voice Calling feature. The latest update rolling out on the App Store has WhatsApp calling ready, but the feature will be rolled out in phases “over next several weeks” like it happened on Android last time around. 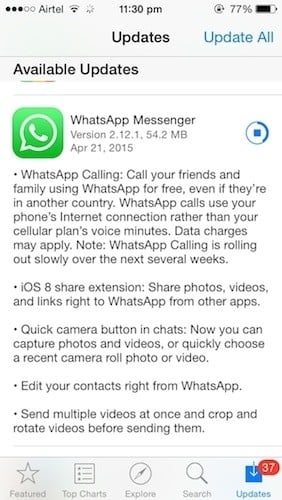 The world’s most popular messaging platform recently announced that it has hit 800 million monthly active users. No wonder it takes weeks and months to roll out a major feature like Voice calling to all the users on all the platforms. Initially, the feature was invite based on Android and only recently, it was opened up to everyone on the platform. You can expect it to be similar on iPhone as well (we will confirm soon).

The new voice calling feature lets you make phone calls to your contacts, meaning WhatsApp will become more competitive against Skype. From our initial testing, the voice calling does work decently well, but has a long way to go to match Skype or Viber’s quality, but still commendable for a free app.

The latest update also adds the iOS 8 share extension support, which is nothing but the ability to share photos, videos and documents directly to WhatsApp from other applications. This was clearly one of the most requested features on iPhone.

WhatsApp Payments: UPI-based payments service starts rolling…
Galaxy Chromebook 2 comes with a QLED display at an…
1MORE Stylish True Wireless Review: Great Sound Comes at a…
Vivaldi comes to Android, with some note-worthy touches
How to get water out of iPhone and make it functional again
How to Sign Out of Gmail on Any Device (Desktop, iPhone,…