It’s no secret that MediaTek has an obsession with the number of cores it puts inside its processors. The chipmaker was the first company to manufacture an octa-core mobile processor back in 2013, and two years later, the company is ready to take the next major step: a 10-core (deca-core) system-on-chip. It brings with it substantial improvements to network capabilities while also reducing the power consumption. This is company’s latest attempt to lure in customers in developed nations as it continues to seize control in the emerging regions. 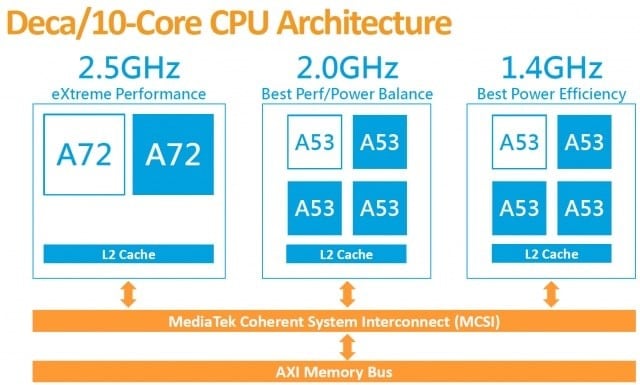 The Taiwan-based company has announced the Helio X20, its new flagship processor for smartphones and tablets. The Helio X20 is the successor to X10 (also known as MT6795), and brings with it the first 10 core system-on-a-chip design. These cores are arranged in a tri-cluster orientation stacked against dual-cluster big.LITTLE CPU designs, which as the company claims, saves up to 30 percent off the power consumption over a standard implementation of the same configuration.

This is MediaTek’s first CDMA2000 compatible integrated modem. The chip also supports LTE Release 11 Category 6 with 20+20MHz Carrier Aggregation, going up to 300Mbps down and 50Mbps upstream data rates. It also has the 802.11ac Wi-Fi integrated to a single spatial stream rated up to 280Mbps. 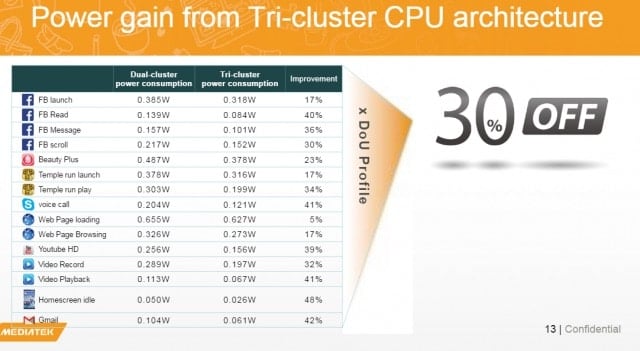 And that’s only half of the story. The chipmaker is also cheerleading the accomplishment it has made on the multimedia front. The new chipset comes with a new integrated Cortex-M4 companion-core which reduces the power usage during processes such as audio decoding, speech enhancement and voice recognition features.

The chipset also offers support for two main cameras, and a high-resolution 2K display. Furthermore, it also brings support for an always-listening microcontroller to listen for voice input and handle music playback without waking any of the primary processing cores.

Besides, the Helio X20 could also be the first chip from MediaTek to flaunt a Mali T800 series GPU SoC. But given the past tactics employed by MediaTek, it seems unlikely that the new GPU will be a powerhouse. On the memory side, the new processor maintains the configuration its predecessor had shipped with — that is, a 2x32bit LPDDR3 memory interface. These are clocked at 933MHz.

Will this be enough to give the company the boost it needs to find its pace in the first tier region? Only time will tell.