Google has grand plans for Android. What began as an operating system for smartphones, Android today is powering tablets, cars, televisions, game consoles, and even have some presence on desktop computers. But the company doesn’t want to stop there. In a bet to the emerging Internet of Things (IoT) product category, at its developer conference I/O 2015, the Mountain View-based company announced Weave and Brillo, the derivative of Android that will boot the miniature devices. 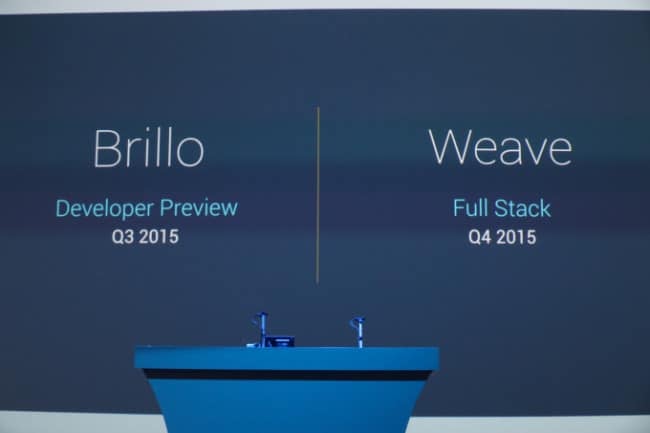 Brillo is an underlying operating system for the internet of things devices. It is built with minimal system requirements and supports Wi-Fi, Bluetooth Low Energy, and other connectivity options. A developer preview of it will arrive in Q3 of this year.

The company also announced Weave, the language or standardized communications protocol which will let Brillo-powered devices and other gadgets to talk to one another. A developer preview of it will arrive in Q4 of this year.

With the announcement of Brillo and Weave, Google has become the latest major tech giant which wants to tap on the emerging IoT market. Huawei announced LiteOS earlier this month. Microsoft too has announced Windows 10 IoT, one of the seven versions of its forthcoming operating system which is aimed at powering miniature devices such as Raspberry Pi. You can read more about it here.

Both Weave and Brillo are independent and cross-platform, giving more flexibility option to device manufacturers. Android devices will auto-detect Brillo devices, the company notes. At the event, Google also unveiled Android M, the latest iteration to its mobile operating system, and Android Pay, its latest take on the intensifying mobile payment system market. Also, HBO Now is coming to Android and Chromecast.

Was this article helpful?
YesNo
TechPP is supported by our audience. We may earn affiliate commissions from buying links on this site.
Read Next
Syska Smart Plug (16A) and Smart Mini Plug (10A) Launched in India
#Brillo #Google IO 2015 #IO 2015 #IoT #Weave