And as expected, Google today at its developer conference I/O 2015 unveiled a new version of its Android mobile operating system, Android M. The company, much like last year isn’t telling us what the ‘M’ really stands for just yet. A developer version of Android M is available to download on select Nexus devices starting today, and the final version will be rolling out sometime later this year. 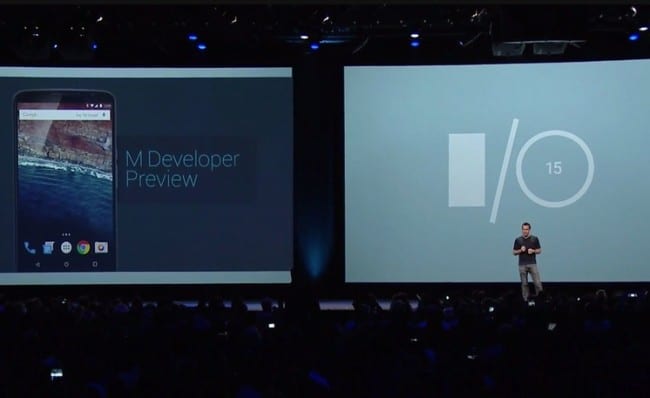 While the new version of Android brings with it a handful of new features, the update is largely aimed at ironing out the bugs and provide other improvements. With Android M, Google is “going back to the basics,” focusing on polish and quality, the company said. Among the new features, the new version of Android will give users better control over app permissions, “you don’t have to agree to permissions that don’t make sense to you.” Another interesting feature in Android M is Chrome Custom Tabs, which as the company says, will allow developers to bake better web views into apps. Sounds good.

As previously rumored, the latest iteration of Android also brings built-in support for fingerprint scanning, which will allow users to quickly complete transactions using Android Pay as well as while unlocking the phone. The company says that fingerprint scanning will work with third-party apps as well. The company announced that the latest update will also improve the battery life of Android devices, claiming as much as twice of battery life on Nexus 9. We’ll see about that.

At the event, Sundar Pichai, the head of Chrome, Android, and Apps at Google also shared several interesting facts. “Eight out of ten smartphones that were shipped last year were based on Android,” he said.