Chinese smartphone manufacturer OnePlus, which will be launching the OnePlus 2 flagship at a VR event later this month, is giving away Cardboard VR for free across the globe. Starting today, you can grab one for yourself. 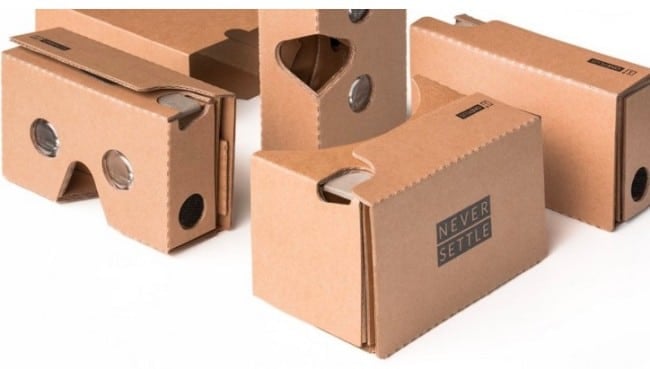 The company announces today that users can grab the Cardboard VR for free, as long as they are willing to take care of the shipping expense, which is $5 in the US, £5 in the UK, and €7 in rest of Europe.

The OnePlus Cardboard is based on Google’s Cardboard, which the Mountain View-based company had given away to attendees at its I/O developer conference last year.

Since then, we have seen plenty of Cardboard VR sets crop up on the market. In India, a company named Boxight makes a similar VR cardboard and sells it for less than Rs 300. Having used that particular one, I can vouch for the quality of the product, though the shipping experience left a lot to be desired.

But the OnePlus Cardboard is apparently better than those knock-offs and even original Google’s Cardboard, as the Chinese company notes. OnePlus says that it has made the headset in a way that it supports most of the 6-inch devices while also making it more durable and resistant to stains and wear.

In a tweet, OnePlus CEO Carl Pei notes that bringing improvements to the Cardboard increased the cost by 2.2 times, and that they are losing money. But it’s all done to make VR become more popular.

As for now, the Cardboard is not available in India, but will be in the third week of July. Folks in India will be able to purchase it from Amazon India for Rs 99, the company notes on a blog post. As for the global give away, the company is making about 30,000 inventories available for purchase.

Mozilla Firefox VPN Service Made Available for Android and…
OnePlus unveils OnePlus Pay Mobile Payment Service
Want to make your 32 GB iPad a notebook? Grab these five…
Android Auto for Phone Screens is now Available for Download…
Handing your phone to a friend? Make sure they can use only…
Facebook announces Facebook Pay for Facebook, Instagram, and…