MIUI 7 launch has been on the cards from some time and today Xiaomi has pulled the wraps from the global MIUI 7 build amidst much fanfare and brickbats at an event in New Delhi, India. The MIUI 7 overlay is based on both Android KitKat 4.4 and Android Lollipop. The MIUI 7 ROM is already available in China but Xiaomi is yet to put it up on the MIUI websites. Xiaomi has finally let the cat out of the bags and announced the major new features of the MIUI 7. 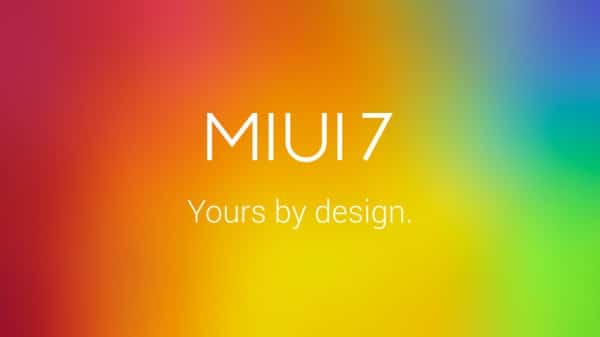 It seems that MIUI 7 is designed to satisfy the craving for customization, it comes with five-new UI (not themes) that the company claims are tailor made to suit an individual’s lifestyle. The Ocean Breeze UI is for folks who are relaxed and want to enjoy their holidays, the Pink Blush is for all the ladies out there, the Rose UI is once again a classy mishmash of design elements and the High life is for the Business folks.
If you feel at home with a normal UI, then you can also switch to the Standard Mode. MIUI 7 is aptly tagged with a slogan “Yours by Design”

However, at the first glance, all these UI look more like different themes and we would only be able to comment on the utilitarian part once we personally test out the MIUI 7.  The company also announced Muse – a theme creator that will allow anyone to create their own themes. What’s more, the new Themes will also allow you to play some simple games right on the lockscreen without actually waking up the device.Plus the MIUI 7 boasts of a Weather animation running on the lockscreen.

The new MIUI 7 will also rotate a set of 10 HD wallpapers on the lockscreen and as of now this feature is exclusive for the Indian market. In a nutshell the MIUI 7 does come with a host of new UI changes and tweaks but Xiaomi has ensured that the essence of MIUI6 is not disturbed. The animations, menu and icons remain largely unchanged.

I have been using Xiaomi phones since MIUI 5 and well, performance has never been its strong forte, especially in low end devices like Redmi 2 which comes with a 1GB RAM. The MIUI team seems to have put in lots of efforts to change this fact and make the overlay faster and more reliable. Although MIUI is just an overlay, it does play a crucial role in how fast or slow the devices function (remember the bulky old Samsung TouchWiz?) 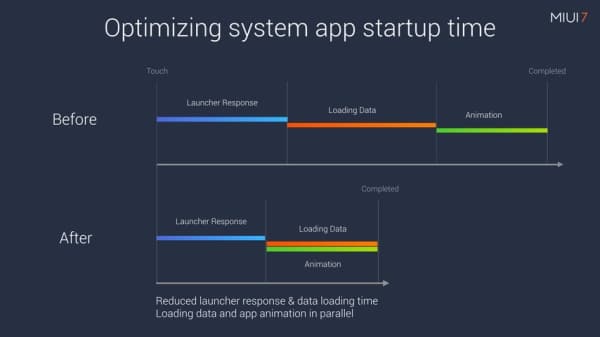 Xiaomi claims that MIUI 7 is now 22% faster, offers 17.7 percent more battery life and boasts of better RAM management. Lag while opening the app is something we are very familiar with and Xiaomi has tried to fix this by loading data and animation parallelly instead of incrementally. The new UI comes with a power on tap mechanism, something similar to Intel’s Turbo Boost technology. This feature accelerates the CPU during important tasks thus bringing about the required boost in the performance, as and when required.

The cumulative effect of all the performance based tweaks is a much more faster and responsive UI. The slow motion video below will showcase the eminent difference in the performance between MIUI 6 and the MIUI 7.

MIUI 7 has increased the size of the XXL fonts and now it is bigger than most of the other UI, thus making it increasingly accessible for people of all age group. MIUI 7 individually optimizes all the apps thus achieving increased battery backup. Xiaomi claims that the new improvised optimization system will help increase the battery life by 10% translating into a 3 hours extended use each day. The video below compares the MIUI 7 battery life on Mi 4 with other devices including LG G3 and the Samsung Galaxy S5.

MIUI 7 heralds with some innovative ways to group a child’s pic in the gallery. This feature groups the babies pictures in a single place so that you can cherish the memories chronologically! The baby album comes with a feature that will beam your child’s photos on the lockscreen.

Child mode allows a certain set of whitelisted apps and restricted connectivity option. It will let kids enjoy the entertainment features without meddling with personal data. It is in fact pretty much similar to the Kids Corner in the Windows 8.1 Phones.

What we like about the MIUI 7 is that it’s not just a mere UI overhaul and it comes with plethora of new features that will play an important role in day to day life. One such feature is the automatic switching of your device into Do Not Disturb (DND) mode once the Mi band detects that you are asleep. Visual IVR is another utilitarian feature that will help you negotiate messy IVR menus without the need to listen out to them.
MIUI 7 hosts a good set of features but we were expecting something like the Family Corner in the Windows Phone which lets users have private conversation with family and share stuff. That being said, MIUI 7 is by far one of the finely evolved Android overlay in the market and the fact that Xiaomi will be pushing updates on a weekly basis just makes it so much better.

After having used Redmi Note 4G loaded with MIUI 6 as my daily driver for quiet some time, I personally would vouch for the MIUI 7 as it introduces new features without disturbing the balance between the functionalities and the User Interface. Another common complaint about the MIUI 6 (and maybe even MIUI 7) is the fact that it resembles iOS and this is not much of an issue for me as long as it performs well without any lags or crippled features.

MIUI 7 Global will start seeding from 24th of August and it supports all the Indian launched devices in the Xiaomi lineup including Redmi 1S, Redmi 2, Mi 3, Mi 4, Mi 4i and Redmi Note 3G/4G. However the biggest letdown is the fact that the base Android version is still Android KitKat 4.4 for the Chinese MIUI 7 ROM. Although the non-geeky buyers wont be much concerned about the base Android version, this can very well become a deal breaker for tech savvy person.