After much deliberations and dilly dallying, India’s largest ecommerce company Flipkart has moved some of the products to be available app only. This essentially means that every time consumers need to make a purchase, they need to do it with their mobile device. The move comes after Flipkart owned Myntra shifted to a complete app only mode earlier this year. 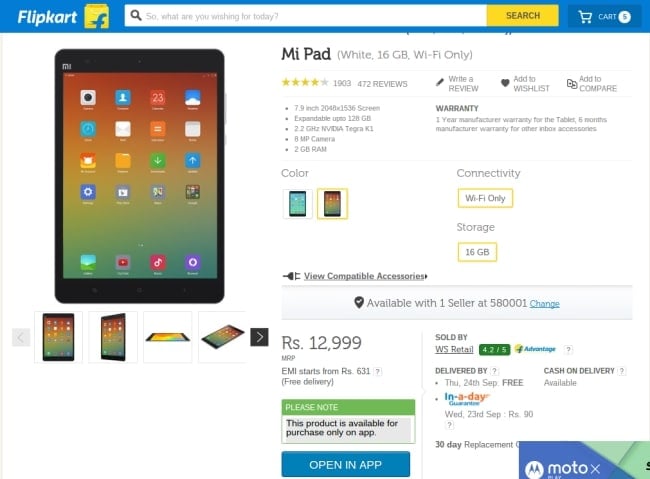 India has always been on the forefront when it comes to mobile first e-commerce customers and at the hindsight the move seems obvious. The app only push in case of Myntra didn’t go well with the consumers but it seems that the buyers will eventually cave in and in the process forego a major transition in the way we shop, which is more like a steep learning curve for both the companies and the consumers.

Flurry, Yahoo based mobile analytics firm had recently attributed the app only aspect to the demographics of the business, Internet in Asia for instance has been greatly surviving on the mobile first phenomena. Further more, according to the analysis 19% of the total time spent on apps in India has been on e-commerce apps.

@akshayable We’re moving products to app only to make sure that you can conveniently shop on the go anytime, anywhere.

India has been ranked number two when it comes to the countries with the highest number of mobile users, as opposed to US which stands third in the list. Although the chances are that this trend might trickle down to other countries if successful, but till that happens Asia will be the testing grounds for this approach. Users have been reporting that the testing is taking place across a host of categories for the past few weeks and this is a tell tale sign of A/B testing by Flipkart. [Update: Medianama had reported this exact thing last month.]

Numbers don’t lie, and this report shows the Internet 41% of the Indian E-commerce sales is from the mobile and this can be attributed to the staggering 55% Year-On-Year growth when it comes to mobile subscriptions.

The companies will be benefited by the fact that the users can be treated to a more customized and tweaked feature rich UI and also push in relevant notifications, thus greatly narrowing down on their marketing efforts and reaching the customers directly. Flipkart insists that the move to an app only approach will further treat the customers to an immersive experience.

The app only move is set to put many users at discomfort as not everyone finds convenience in shopping from smartphones. Personally, I’ve been using the Flipkart desktop site for all the expensive purchases whilst sticking to the mobile application for smaller purchases like books and mobile accessories. However, other ecommerce sites like Snapdeal and Amazon beg to differ and maintain that a good number of their buyers still use PCs to shop online, thus reaffirming that they would not be shutting down the desktop site.

Well that being said, every transitional move in any industry comes with its own conspiracy theories and the app only approach is no different. The most convincing one seems to be the theory that ecommerce companies are actually trying to cut down on their losses by going app only, additionally it also suggests that ecommerce wants to break free from Google dominated Internet and directly bring the consumers to their shops. The paradigm shift to the app only approach will reduce the total sales for the e-commerce companies thus ironically also reducing their loss. While this doesn’t seem to be the case with Flipkart in particular, it’s possibly something to do with having single focus on mobile app, rather than maintaining multiple platforms.

Whatever might be the situation, most of the e-commerce companies are spending a fortune to acquire customers and needless to say customer is still the king.

Was this article helpful?
YesNo
TechPP is supported by our audience. We may earn affiliate commissions from buying links on this site.
Read Next
25 Best WordPress eCommerce Themes for Your Online Store [2022]
#eCommerce #Flipkart