Google has been including app information in its search results from quite a while but to access the content, one needed to install the app. Now all that is set to change since Google has introduced a new way to stream the full-fledged app to your phone via cloud. 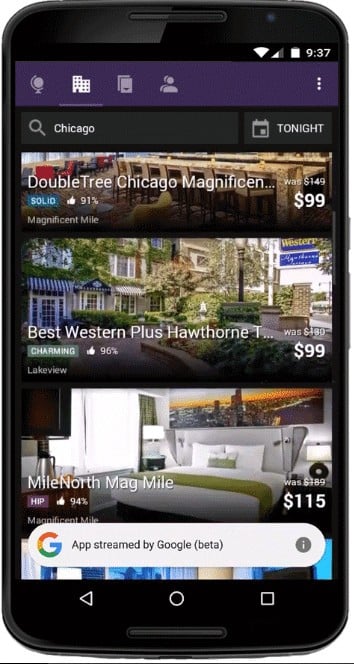 The Mountain View company announced today that it’s en-route testing a feature which will stream the apps to Android phones. In case you are searching for a hotel booking and the first search result is actually an app, Google will stream the app to the users allowing them to make a booking. This move is something similar to a simulator wherein the app is sandboxed in a simulated environment.

As per TechCrunch, the streaming is functional only on nine apps as of now and includes Hotel Tonight, Weather, Chimani, Gourmey, My Horoscope, Visual Anatomy Free, Useful Knots, Daily Horoscope and New York Subway. The streaming feature will be available on phones in US which are running Android Lollipop and higher. Google search has been a quintessential tool for the Internet users and since most of the data/content these days is encapsulated in apps, Google wants to stream it to your smartphones without an actual install. Recently, Flipkart had reintroduced its Mobile website and many had speculated it was to avoid being penalized by Google search engine as all the search result will lead to an app install prompt, the new stream apps feature seems to be an effort from Google to solve this issue.

This move will have the app publishers grimacing as the install counts will be affected, moreover Google will once again be taking the control from publishers and shifting it to their search pages. If we recall rightly, mobile apps helped publishers not only to help users with their services but it also reduced the revenue spent on marketing, now with Google allowing the apps to be streamed without install, the tables have been turned. Google might after all introduce a new count which might say “Number of times the app has been streamed” or it might fire off a new revenue channel.

50+ Best Google Assistant Commands for [2022]
Read Next
Source: Google Inside